this is a project that has been in the works for quite a long time. since discovering Paul Slocum's Synthcart some years ago, i have always imagined building a portable version. unfortunately though it has turned into a tedious curse. after numerous attempts and miserable failures for reasons yet to be discovered, i have finally returned to the project with confidence. the idea is pretty simple. first; use what i've learned from Ben Heckendorn's atari portable tutorial and hack up an atari2600. then add the Longhorn Engineer's video mod for a video out that actually works. then plug in the the Synthcart and it should all work perfectly right? 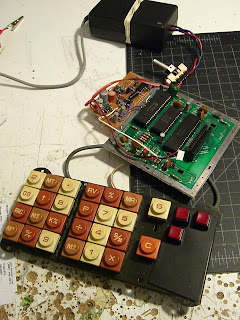 well, so far it hasn't worked. it did for a while though. actually it was working great untill suddenly it stopped working... i can only assume that the cart was bad because when i checked out the atari age store to buy yet another Synthcart, i found that they were selling newer versions called melody carts. 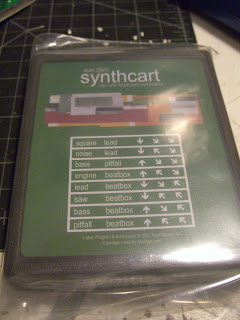 these new melody carts aparently employ newer chips that can be updated if need be. aparently the original carts were reused roms from 30 years ago. that must be why it died... god please! so far i havent tested my new cart in my hacked 2600. if it doesn't work, then that just means the problem is somewhere else and i have two working synthcarts instead of one. that would be cool but i'd rather it just work right off the bat. i'm so ready to be done with this project. 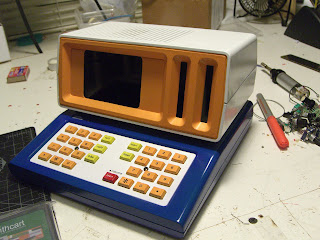 another thing is the screen i'm using. soon after i built, cut, sanded primed, painted, labeled, and coated my rad enclosure, the light in the lcd screen i chose decided to half burn out. haha!!! now i'm faced with the task of backlighting it with leds. unfortunately though it has to be perfect, so throwing a few leds back there wont do. i have ordered a few dozen right angle leds that are no bigger than half of a grain of rice. i am going to throw together an led driver circuit and make this thing shine. unfortunatley though, i just dont have the time. i am currently doing a lot of work for people right now too. i am also hoping to start a big job once i'm done with these pedal mods as well. we'll see. just need to keep pushing foward.
thanks for reading,
-tanner