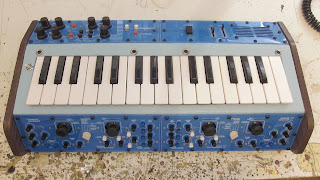 I started this project some time ago. it has probably taken a good six months to complete. there was really no rush to finish it as it was intended only as a prototype for what was supposed to be a short production of ten or so of the same design. unfortunately though this will likely be the only one i make in this size and arrangement. although i was able to create some highly stable and unique circuit ideas for this synth, the hardware is just too small(and expensive). i just wasn't happy with the feel of the interface once it was finished. i would have much rather used big heavy panel-mount hardware but unfortunately i designed the enclosure too small. another issue with the design i found was where i would find key-beds for ten of more of these little guys. i had originally designed the body around a set of keys from a yamaha pss-130. in case you didn't already know, i have a deep resentment toward the yamaha pss-130 and its little brother pss-30. however, the one redeeming quality of the pss-130 is that it actually has a pretty nice set of keys. like the PS-3, the keys are independently floating so there is less of a chance of them breaking off, and no chance of having to replace the whole set if one does somehow break. the broken key could merely be replaced. on top of that, the entire keyboard assembly can be unfastened from the pss-130's body and removed effortlessly. re-wiring the pcb to accept the EK001 was the most difficult part of the process. now, in the past, pss-130's have come in and out of my life quite frequently. it seemed like for a while there were always one or two at the thrift store at any given time, and you could always find them at the bins. a lot of times people would pick them up at garage sales and drop them off for me just because they only cost a dollar or so. i even remember seeing a whole pile of them selling on ebay for change. with this in mind i figured the pss-130 keys would be the most suitable choice. i also felt morally inclined because there is really nothing useful about a working pss-130. with all of this in mind, i designed the body of the new synth to fit the pss-130 key-bed. it was only after it was built that i realized there was a sort of dry spell of pss-130s... i hadn't seen one around in a while. and the asking prices on ebay were well over what i had expected to pay. to this day i still haven't seen any in town anywhere... oh well, another reason to hate that model i guess.

Like the PS-3, i designed the enclosure for the synth using skechup. i kind of thought it would be cool to have all of the controls up front instead of behind the keyboard. i had also originally intended to build an additional module that could be plugged into the synth on the side. the module would be a rhythm sequencer and mixer for accessing the built in EK001 drum sounds. now that it is finished though, i kind of doubt that i will ever get around to building the expansion module. i just don't think it would be worth the effort in the end because i cant imagine those pokey drum sounds mixed with the new sounds of the synth... they are just too different. we'll see.

The Hing Hon EK001(and relatives) has long been on of my favorite toy keyboards. whoever designed it should be given an award. the fact that is such a cheap generic throw-away toy and yet inside it employs an amazingly friendly little synth chip. the chip has eight built in square wave timbres. there are actually only four timbres. depending on which timbre has been selected, amplitude envelopes are applied to give the timbre its instrument's sound. the keyboard is two-voice polyphonic, meaning that any two keys can be played at once. each of the two voices has an independent volume envelope input, and independent signal output. the two voices interchange when played. so every other note will be the same voice. the voices hold their last key. if the amplitude input of the voice is opened, the voice's last not will sustain indefinitely. there is a separate signal output for the rhythm section but the drum sounds can not be modified individually. some earlier models had individual outputs for each drum sound, but the sounds themselves could not be modified. the chip has a built in vibrato circuit that is set to a fixed frequency. the depth of the vibrato can be set via resistor to the current controlled master-clock. the master clock controls the global pitch over the two synth voices, all four drums sounds. it also controls the frequency at which the vibrato modulates the pitch. the EK001 has 37 keys and each key has its own input. i think i had seen an older model that used a multiplexed network of keyboard inputs, but usually they have 37 individual addresses to activate each note. each note responds to a common bus(0v).
i usually disregard the built in vibrato circuit s you can  change the speed without changing the global pitch. i spent a little time coming up with a way to use the amplitude envelopes of the two voices to trigger my own envelope generators to modulate both the amplitude of the voices as well as the cut-off frequency of the voice's respective filter. the voice signals coming from the chip a first fed in to a frequency divider, then a  pulse width modifier before being sent either to a mutual XOR gate or directly to each voice's respective filter. when the XOR gate is engaged, the two signals are multiplied by each other, and the common output is then sent to both filters.
the frequency dividers are quite different than the ones i've built in the past. this design uses the ever-popular 4017 10-stage divider. the voice input is fed to pin 14 and the output to the PWM stage is fed from pin 3(stage1). the number of stages between each high stage coming from pin 3 is set by one of eight outputs from the 4017 to the reset pin(15). the reset input is set through an 8-input multiplexer. the multiplexer has three binary inputs. the three binary inputs can be set through a crude analogue-to-digital converter based off the LM3914/74HC148 combination, three separate LFO's or both at the same time. the A-D-C can also be modulated via "continuous wave generator", or manually using the "analog transpose" knob or joystick. check out he schematic for more details.
everything else about the synth is pretty straight forward. the filtered voices are sent to a pretty nice delay pedal i had laying around. i ended up using a stripped down ibanez DL-5 i've had since i was a kid. sounds way better than any pt2399 configuration, so i went for it. there are also a couple basic LFO's for modulating the global pitch of the synth, and another to modulate the delay speed. 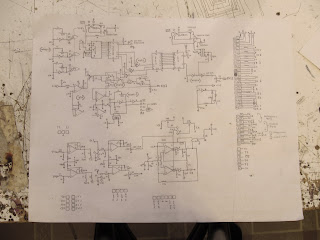 in all, this synth came out really great, but in retrospect, there are some things i would probably do without. one of the most obvious changes would be how the joysticks are used. originally i thought it would be cool to have the four joysticks up front so you could play keys while modulating parameters with the joystick. unfortunately though it is not a convenient or natural as you would think. also, i would probably change what the joysticks do. i like being able to modulate the "repeat, analog-transpose, and pulse ratio", but the cut-off is unnecessary. maybe resonance or attack would be more interesting. the one major thing that i probably will change is the pitch slider. for some reason i built a voltage controlled resistor for it out of one of those cheap vactrols from electronics-goldmine. the thing is severely capacitive so when the pitch is changes there is a huge latency. it sounds kind of cool with the vibrato LFO and every thing but i should probably fix it. its just a little too weird... 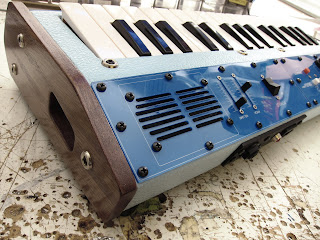 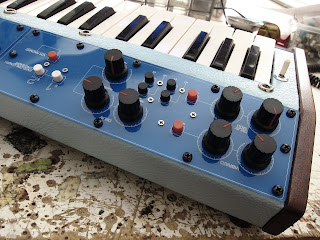 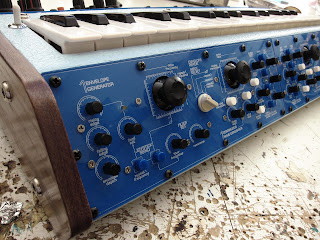 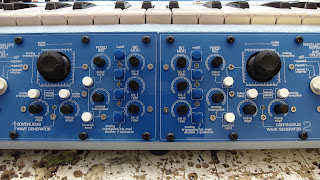 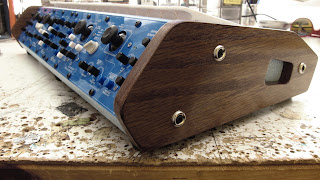 this particular project required a substantial amount of designing and laser cutting. i cant even recall how many panels i had to re-cut due to design errors and bad paint jobs. eventually though, i got four that worked(and mostly match). thank god i have my own laser. i cant imagine trying to build something like this without my own. it would actually be impossible! with this project i took a lot of care in creating interconnects between the hardware and the PCBs. its a little bit more work but it is so worth it when you consider how much time it would have taken to unsolder and re-solder all of the connector wires every time something needed extra attention. i am now hooked to the little nylon snap-in headers. i only hope the last a long long time. at least longer than anything else... 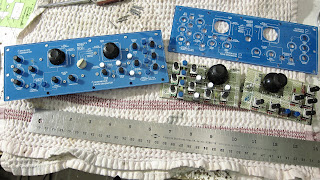 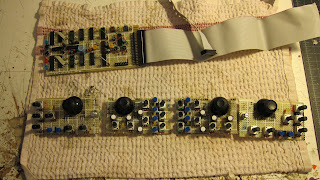 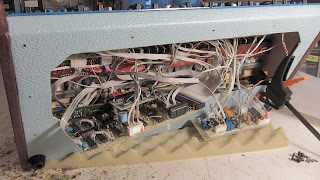 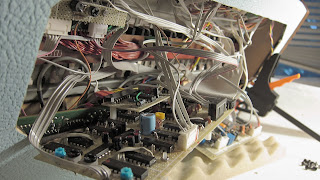 please watch the demo video for more details on the interface. funny thing, as soon as i uploaded this video, googl-tube tells me there is copyrighted music in my video and that i need to pay someone to use their song! it was eye-opening to say the least. with that said, i would hope that any of you reading this would understand that my demo videos are meant to be functional demonstrations only and are meant to be as un-musical as can be. if you think i am ripping you off, i'm sorry, i'm not. its a fucking you-tube video... enjoy. 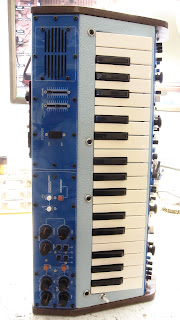