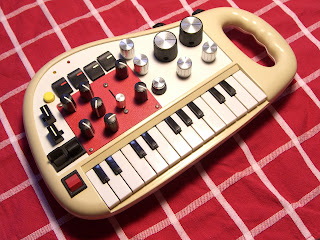 this will be a quick write up on a project i finished a while ago. i've been meaning to post this for a while but have been preoccupied with other things. this project came to me while i was working on a much larger project. i needed a break from the larger project and a piece i had sold someone a long time ago had fallen on hard times. the guy i had sold the keyboard to has bought many things from me over the years. he contacted me to let me know that the glitch circuit in the keyboard was no longer working. he asked if i could fix it and i agreed. the keyboard was a glitch toy that i had built in 2008 and sold on ebay. more details here. 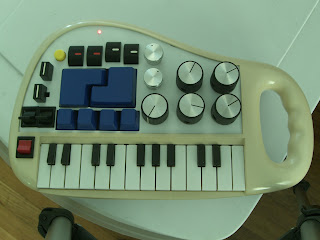 (this is a photo of the original mod)
upon receiving the keyboard in the mail, i was pretty stoked to see one of my earlier creations again. i couldn't believe how long it took me to build that piece of junk. the functions were silly! i opened it up to have a look at the glitch circuit. it was dead. i don't really know how or why but it isn't the first time that i've seen a glitch circuit just stop glitching. the glitch chip that i used in the keyboard came from this funny toy that had great sounds and produced very unique glitch sequences. and quite a few more types of glitches than your standard 3 volt glitch toy. it was hard to accept that it would not glitch ever again, but i did have an alternative. the yellow toy steering wheel that i have used in so many of my other glitch toys is usually the easiest to find of 3 volt glitch toys and in my opinion the most consistent. the fix would be simple. i would replace the glitch circuit, send the keyboard back, and get back to the torture of my other big project... only problem was that by replacing the glitch circuit, most of the buttons and some other functions on the keyboard would be rendered useless. not only that but i was kind of appalled by the wiring of the whole thing. i offered the owner a deal he couldn't refuse. i would completely overhaul the whole thing for the cost of materials. he agreed and i had something new to distract me from the frustration of my other project. the first thing i did was completely gut everything. 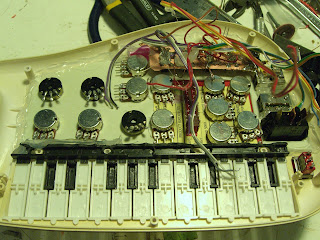 i began developing a new circuit based on one that i had prototyped a while back. basically a glitch circuit that does not require the user to activate a sound, then glitch it, and then reset it when it locks up. it is basically a step sequencer that is activated with the push of a button. when held, the sequence will start by activating a sound, then glitching the sound, and after a second or two will reset the glitch circuit and start the sequence over. this makes it easier to find the glitch you are looking for. all you have to do is hold down the glitch button until you hear the glitches that you like. 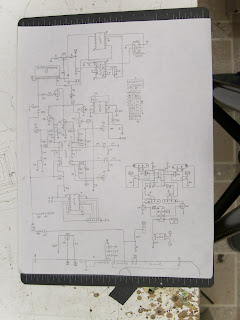 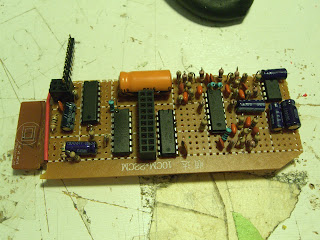 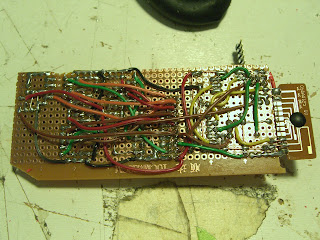 that easy button freed up a lot of space on the control panel for other things so i decided to run the glitch generator through a frequency divider and have three independent channels each with their own volume control and resonant filter. there is also a clean mix that is a volume control for the original glitch signal. the third sub-octave channel also has a six-position switch that can select one of six sub-octaves. the lowest of which is more or less a clicker. the output of the divide channels is substantially fuzzy because the signal needs to be "squared up" before it can be divided, so the sub-octaves are quite a bit harsher than the original signal. i also added a switch to send the piano sounds into the divider to be mixed with the glitch signal before it is divided or to be divided by itself and mixed back together. there is a switch to mix the original piano signal with the sub-octaves or mix the sub-octaves alone without the original signal. 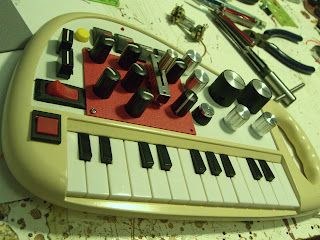 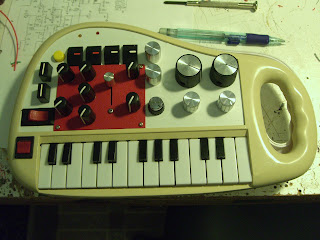 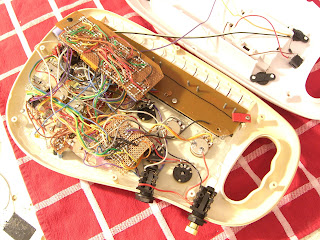 (all wired up)
there is also a guitar input to the divider, however the original signal from the guitar input can not be mixed in. all three inputs(glitch, piano, guitar) are mixed together prior to dividing so some really complex noise textures can be achieved when the three are playing together. the modulation is all the same except i completely rebuilt the two LFO's. they originally had been pretty limited in range.  i rewired all of the hardware and gave the piece some nicer knobs too. see the manual i made for more details on the modulation. 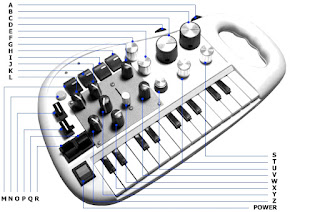 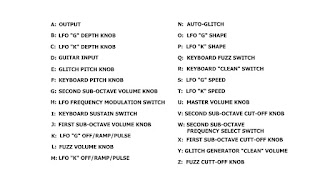 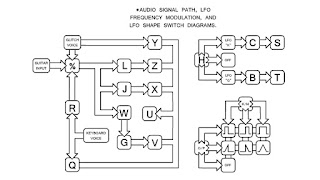 that's about it...
Posted by TANNER GALVIN