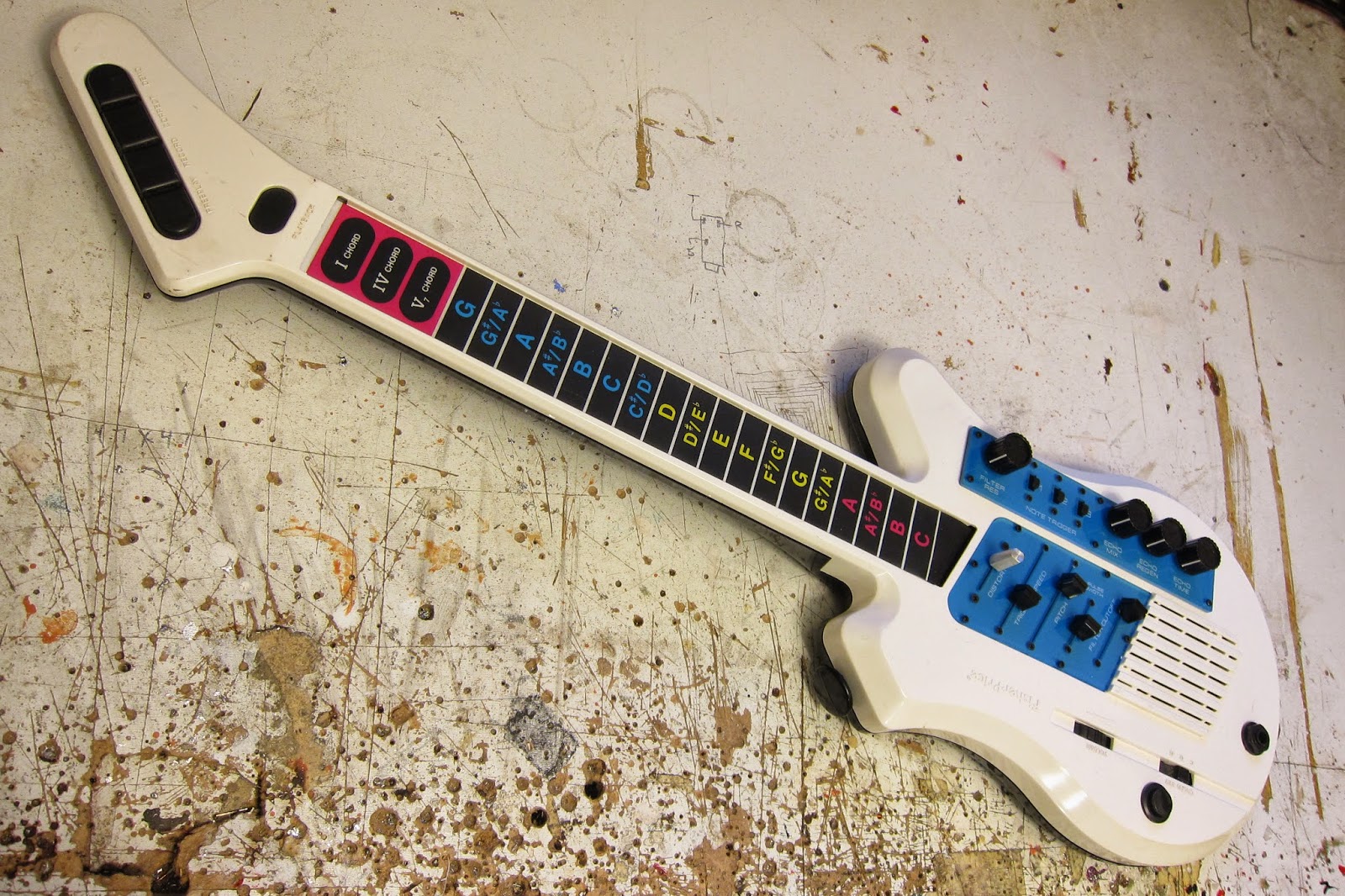 This little project came to me while i was cleaning out the basement. Heidi and i are moving soon, and i have been trying to liquidate as much as i can before we go. we have lived in this apartment for 10 years now, so our basement was full of years of postponed projects and toys that i have collected. i have actually done pretty well at cutting my collection down to bare necessities. i did however end up filling one box with things that i thought i should maybe sleep on before deciding to get rid of them. in the box was a fisher price guitar from the late 80's. it had been so long ago that i had added it to my collection, that i wasn't even sure if i could remember what it sounded like. i do remember having the keyboard version that was sold around the same time. i remember that keyboard having particularly terrible sound. for whatever reason, i ended up scrapping the keyboard, but kept the mainboard over all those years. i'm not sure why, but now i'm glad i did. when it was finally time to make a decision on whether or not to keep the guitar though, it occurred to me to maybe plug it in and have a listen first. i did, and the sound was terrible! so terrible in fact that i decided to open it up and see why. well, one thing led to another, and i decided that i probably had enough time before we move for one last project. 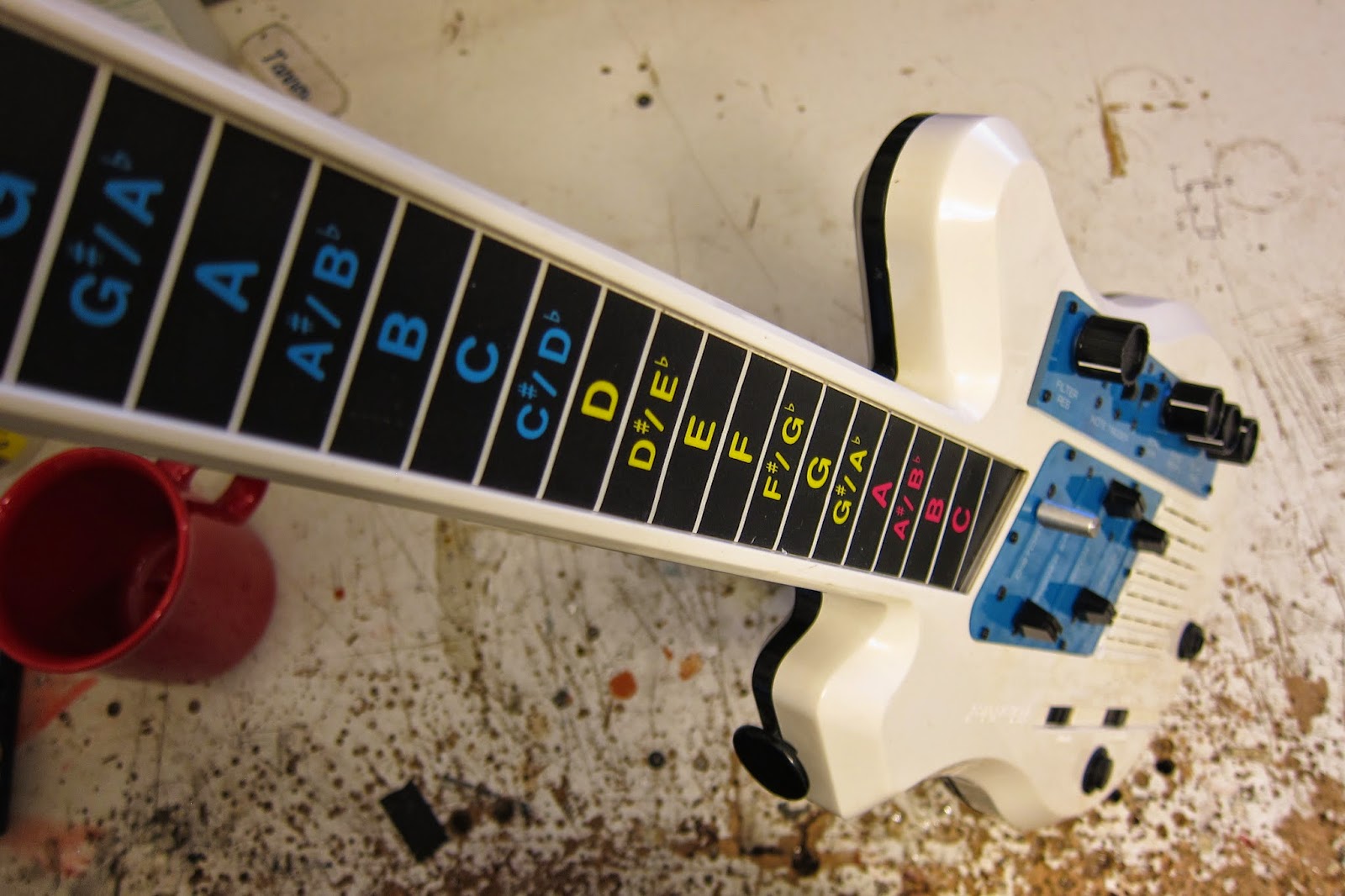 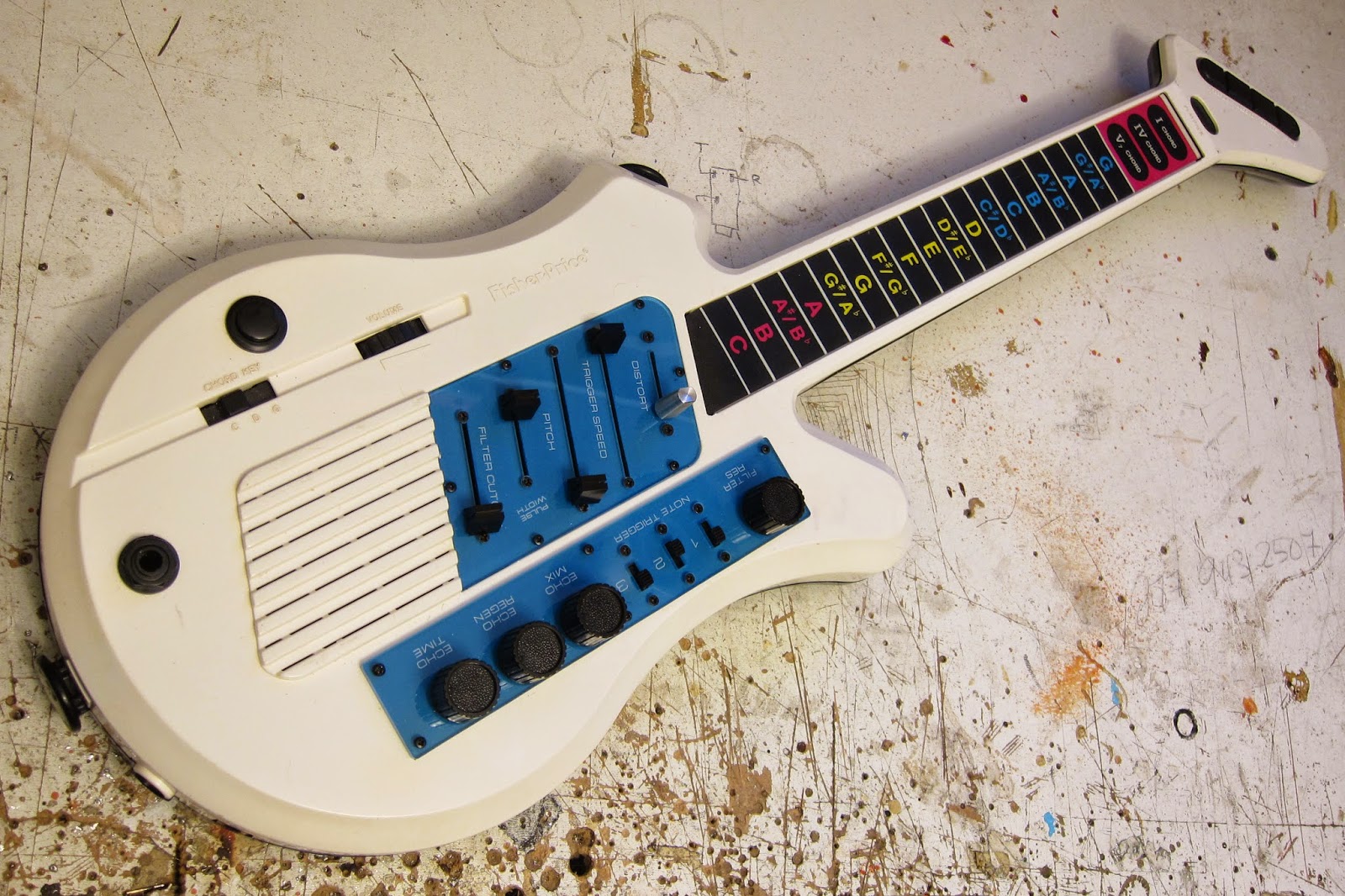 Upon opening the guitar, i quickly found that the primary reason the sound quality was so bad was because of the way the voice was generated. the guitar's voice chip sent 8 digital parallel outputs to a shift-register/ resistor array, in some sort of external DAC(digital-to-analog converter) configuration. the digital outputs were also being sent to the keyer/programmer chip before being sent to the shift registers to be mixed. kind of seemed weird to me, but i guess it kind of made enough sense to move on. i tried to find some kind of envelope control for the guitar voice, but it seems that that was being generated digitally too. so that's why it sounds so terrible! well, there would be no 'cleaning-up' the sound here. instead i focused on that DAC business. mixing in the raw digital signals to the audio path made for some great distortion. i also thought it might be cool to send the digital signal through a PWM(pulse-width-modulator) circuit, as kind of a highpass filter. the PWM sounded great, but none of the combinations of the digital outputs and the analog output sounded very good together, so instead of making a mixer section for the 9 different output options, i just picked out the 6 most harmonic sounding digital signals and put them on a six-position selector switch. each of the six 'timbres' have unique harmonics. especially through the PWM circuit. on one end of the spectrum, the voice is loud and has rich harmonics that carry. on the other end of the spectrum the voice is total 'dial-up' noise. then there are four varying levels in between. 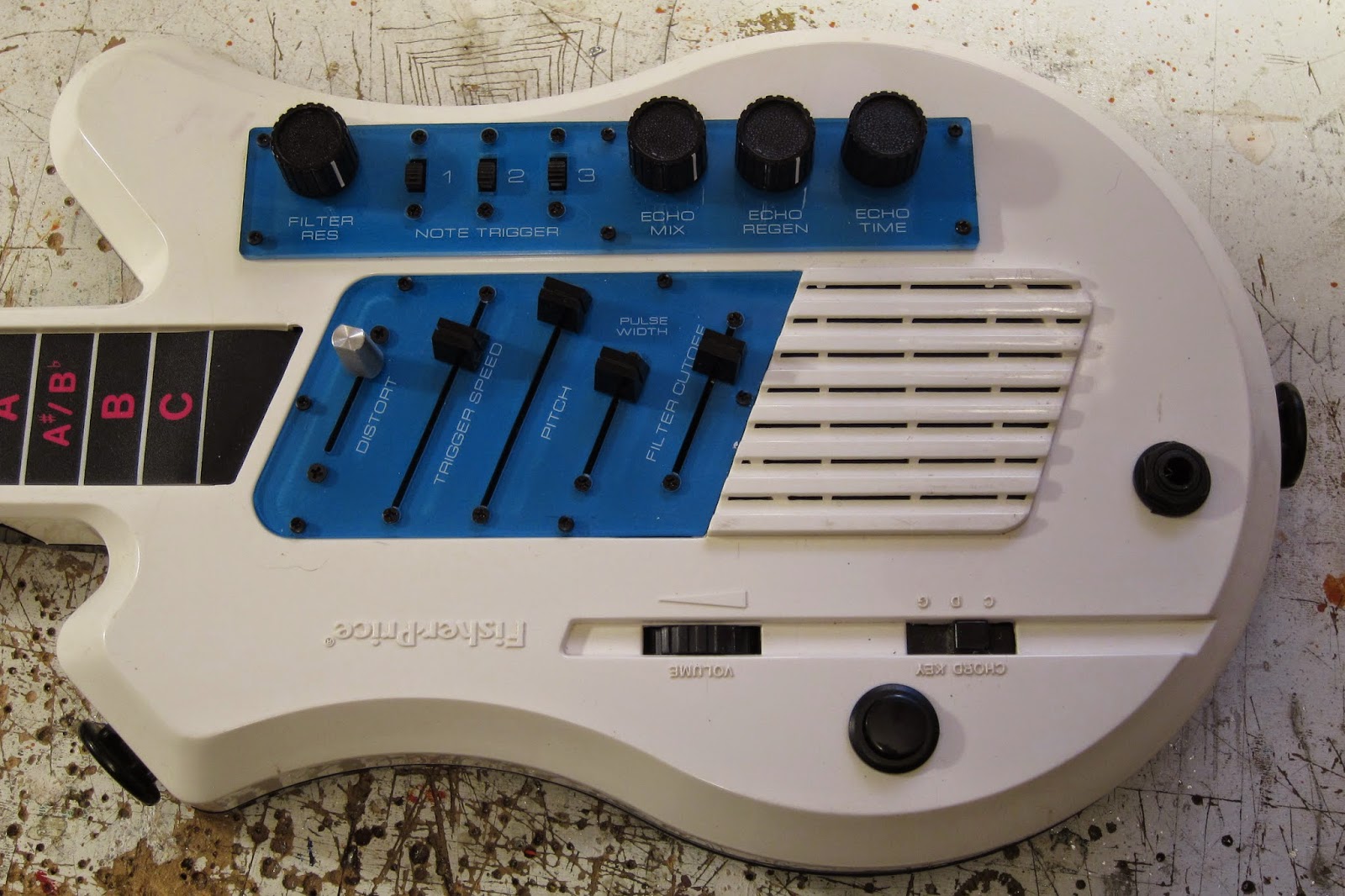 The guitar originally had three strummer paddle switches. to play the guitar, you would hold a note or chord on the fretboard, and strum the paddle switches like strings. when playing a single note, the three paddles all strum that same note. when playing a chord, the paddle switches play one note in the chord individually. i wanted to replace the strummer paddles with an LFO(low-frequency-oscillator), but i also wanted to maintain the chord strumming option, so i built a 3-step looper with a CD4017 chip to cycle through the notes sequentially. i added individual switches to the outputs of the CD4017, so that any or all triggers from the looper to the strummers could be turned on or off in any combination. i also added a big arcade switch to act as a manual trigger for the first string, or the root note of the chord. i may end up going back in and changing the manual trigger to the second string though. i later found out that string two is responsible for advancing the melody recorder in playback mode. more on that later. 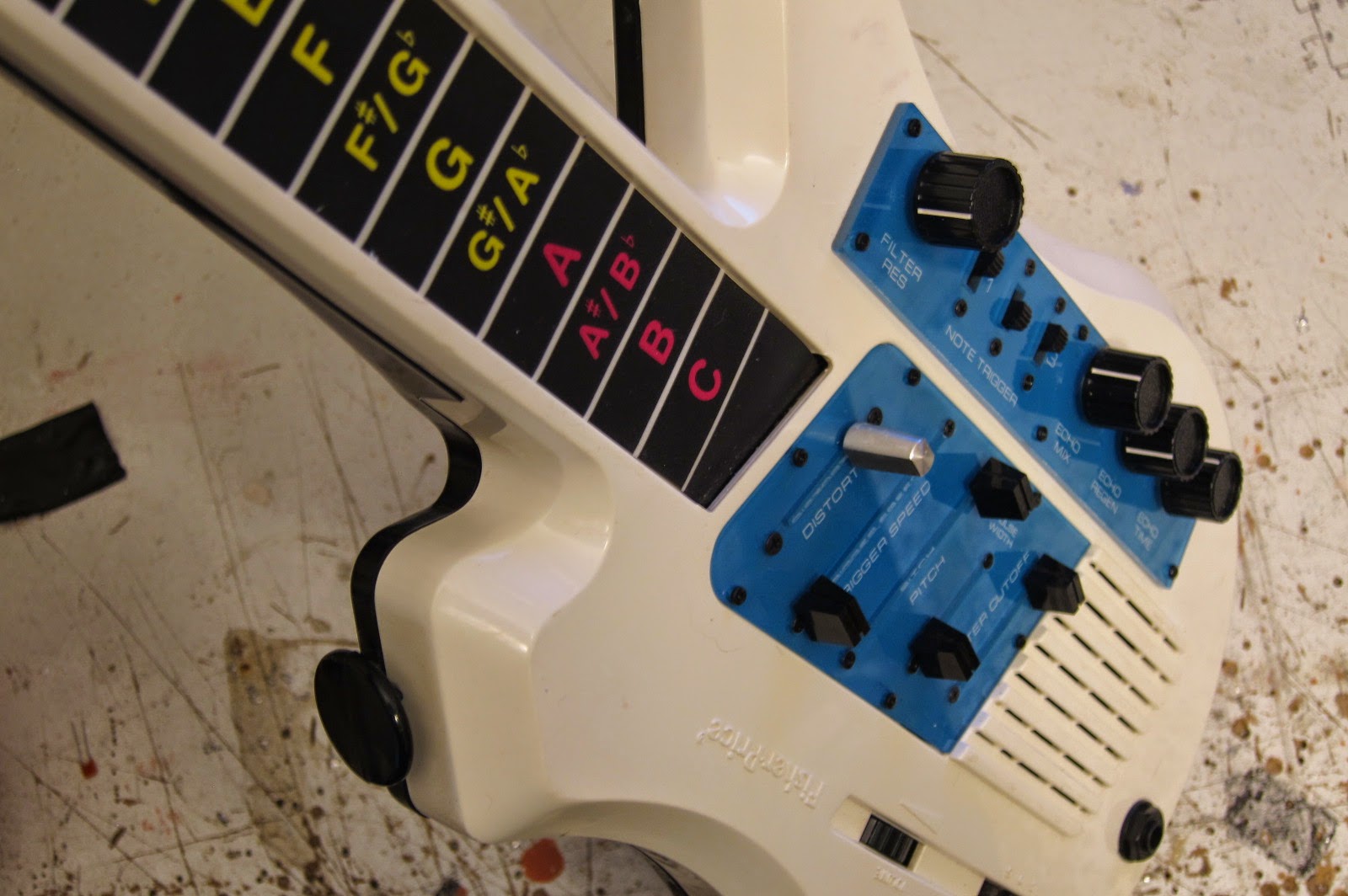 at this point the guitar was sounding really good...in a noise-loving kind of way. the sound still needed something though. i didn't want to go too crazy on this project since there wasn't much time, so i decided to add a PT2399 echo circuit to the mix. it did a great job at taming those harsh digital timbres. after being totally satisfied with the sounds i was getting from the circuits i had built, for some reason i really wanted to hear those digital noises through a lowpass filter. i ended up stripping out three buffer/filter stages from the original signal path, since i wouldn't be needing them, but there was one of the four op-amps of an LM324 that was still needed for the weird power switch circuit in the guitar. this meant that i had 3 left over op-amps to use, so i went with a simple 2-pole vactrol based lowpass filter. this is where things got stupid... while i was reverse engineering the mainboard of the guitar, i was constantly flipping the PCB(printed circuit board) around to see the tracings on the bottom, and the components on the top to draw out the circuit to better understand it. i did a great job of drawing everything out, but for some reason i reversed the power pins to the LM324 in my drawing... you would think that after all of these years of using LM324's, i would know by now which pin is positive, and which one is negative. thanks dyslexia! anyway, i built up the filter exactly how i had drawn it into my guitar schematic. it wouldn't work??? no, why would it? i tried a million things to try and figure out why every time i turned the power on to the filter, my voltage would drop. i tried different filters, different power supplies, different voltages... at one point i thought that the regulator to the guitar circuit just wasn't capable of sending any extra current to the filter, so i decided to give the filter 12 volts to see what it would do. as i was pulling a jumper carrying 12 volts over to my breadboard, the  jumper sprung out of my hand and landed directly on one of the pins to the guitar's voice chip. from then on it didn't make a sound. all of the other pins were still fine. they all did what they were supposed to, but this pin gave me nothing. it was the pin that sent the 'enable' signal to the DAC's shift register, so no sound would come out without it. DAMN! this is when i remembered that i had kept the mainboard to the keyboard version. i dug around and found it, and thankfully the voice chip was a match. i de-soldered the old one and soldered in the new one and it worked again. it was then that it occurred to me to check the polarity of the op-amp. it was backwards. i swapped the polarity and the filter worked perfectly. 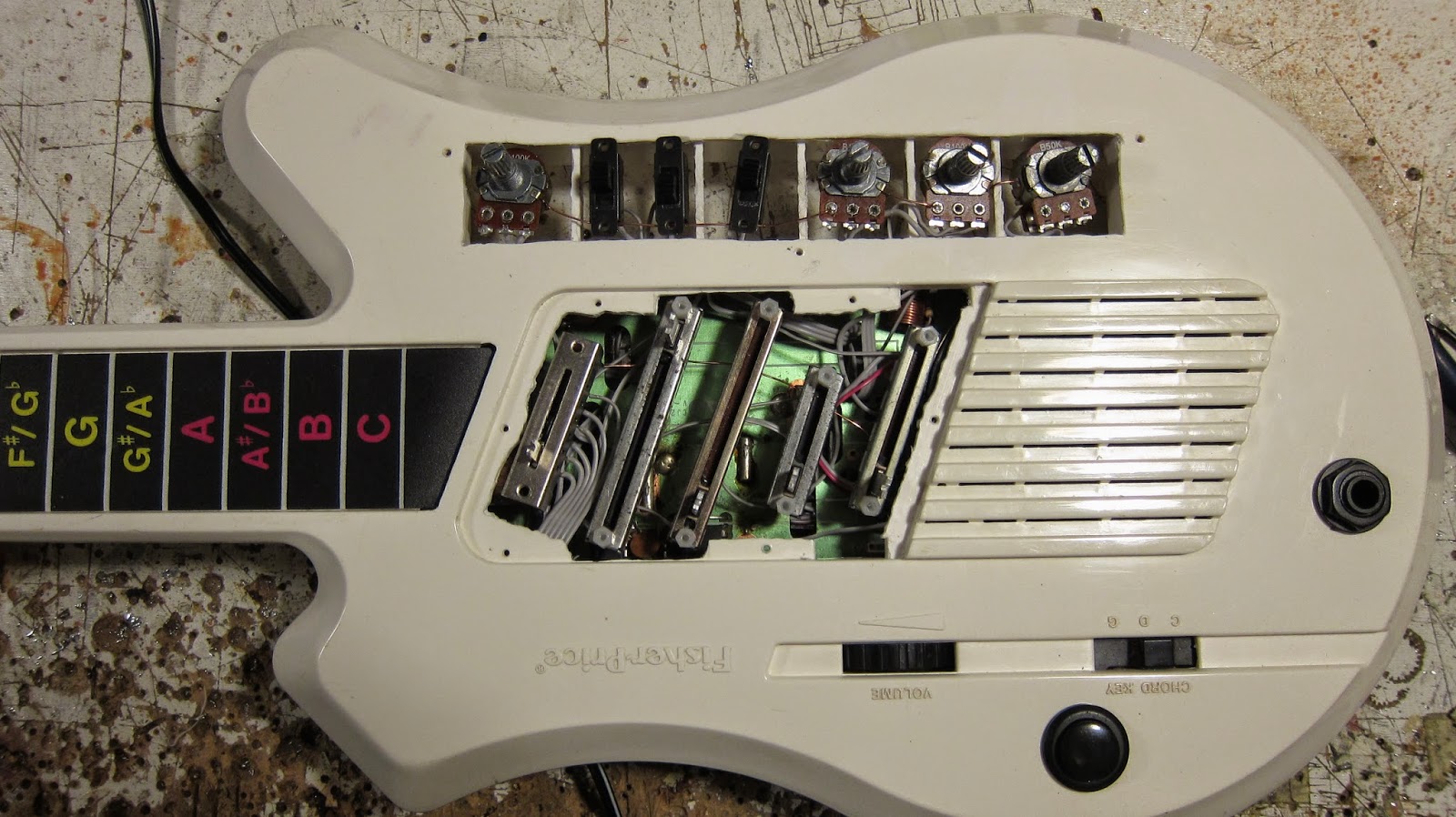 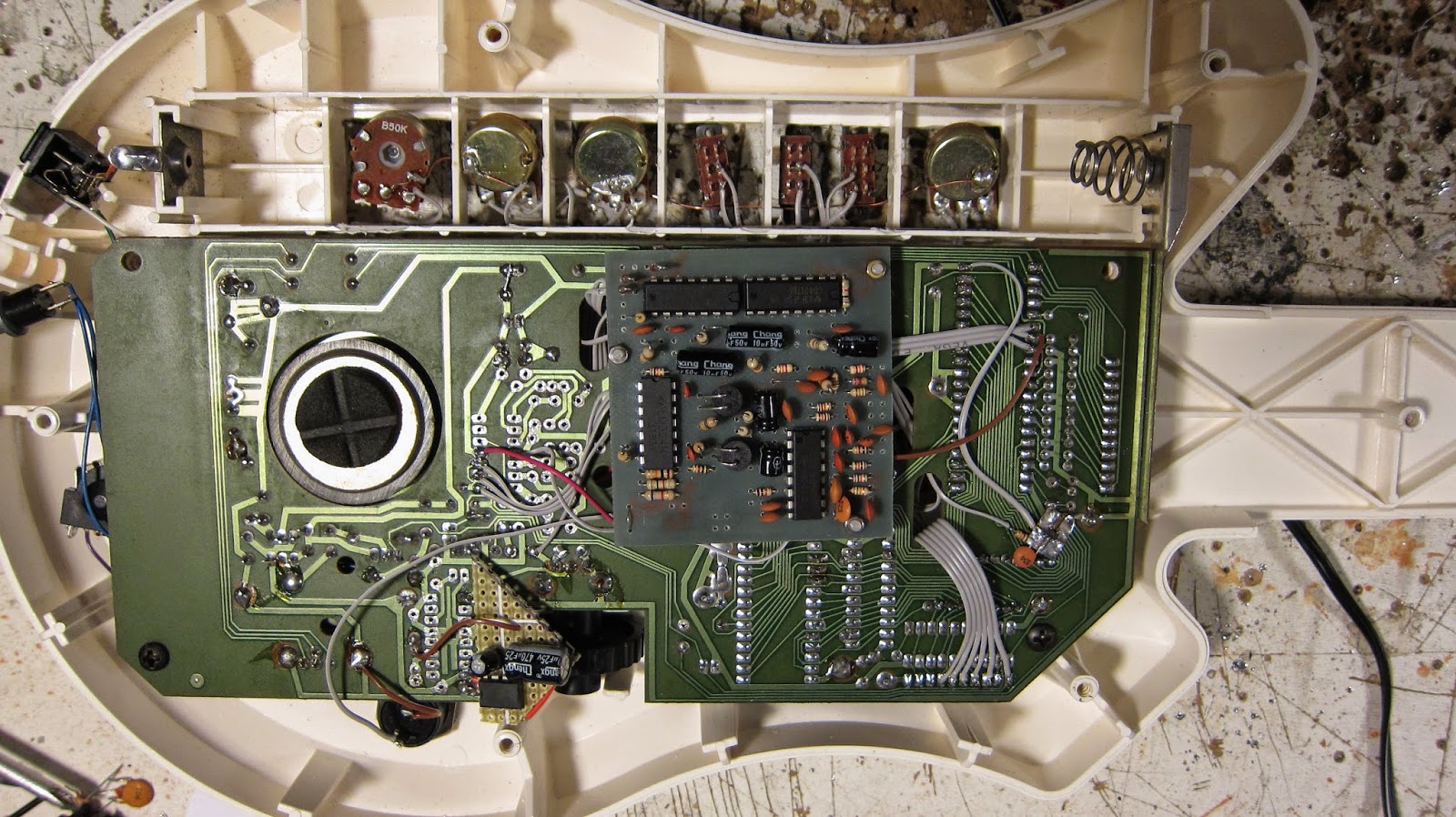 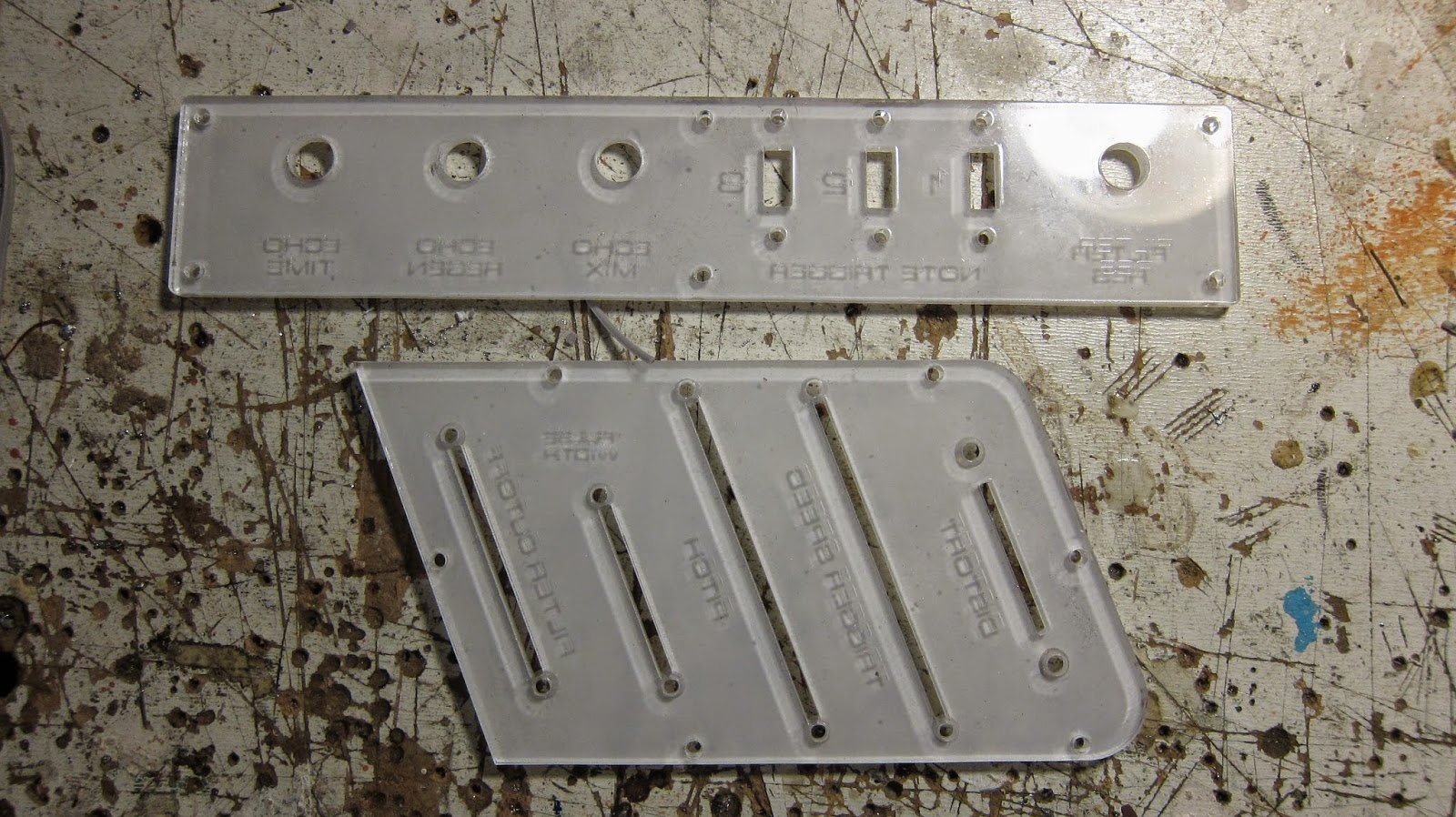 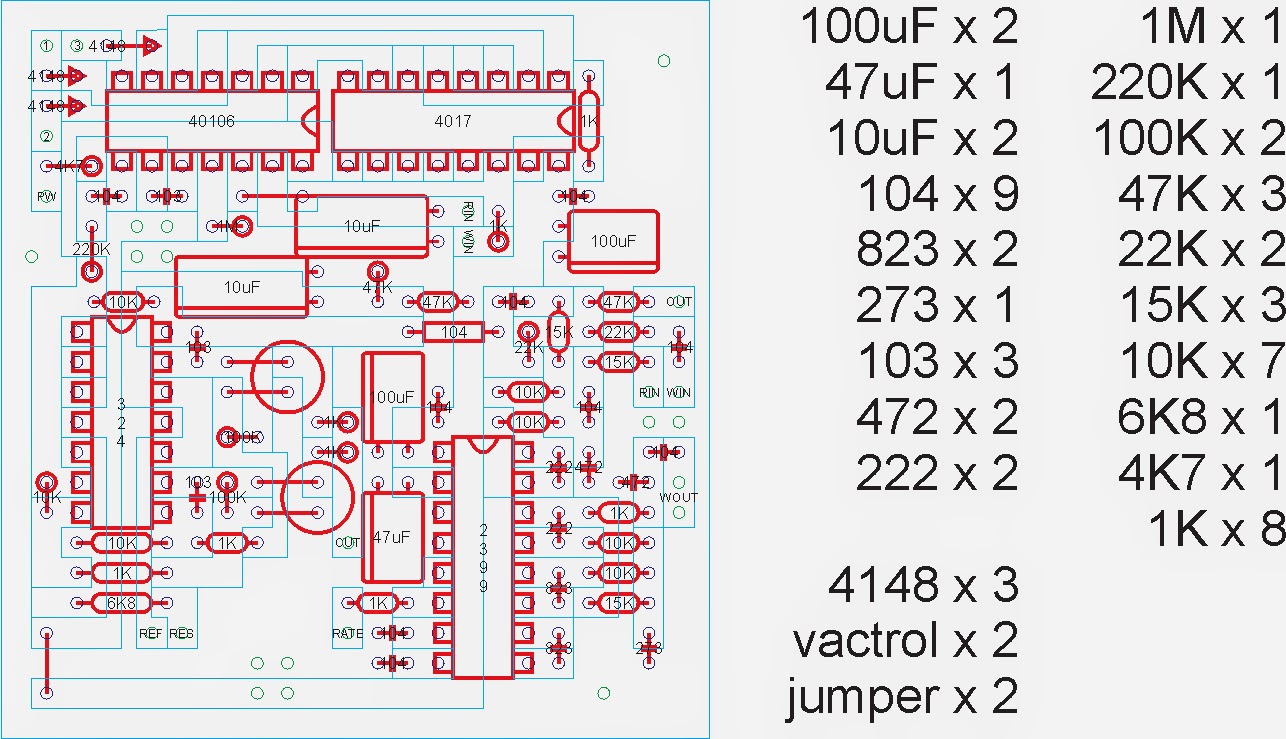 Once the circuit was finally working, i quickly drew up some faceplates for the guitar, and started tooling the enclosure to make room for all the new hardware. after that, the enclosure would need a substantial cleaning. with the exception of some coloring-crayon stains here and there, it came out pretty clean. i then drew up a little circuit board design for all of the additional circuitry, and engraved it with my CNC. i did have a little bit of trouble with the PCB though. i forgot a few components in my 'bill of materials'. when i used all of the components that i had listed, i just assumed it was done... oops, forgot a couple. eventually it all worked out great, and assembly was pretty smooth. after everything was built, and the guitar was all closed up, i started playing with it. not only did everything work exactly how it should, but i also realised that this guitar has a pretty BAD-ASS SEQUENCER! i knew that it had a record and playback function, but i didn't end up trying it out until everything was said and done. the guitar has a 'record' button that puts the guitar in record mode. in record mode, the fretboard is used to record up to 39 notes without the need for the strummer switch. in playback mode, the second string plays the sequence one step at a time on each strum. since i wired up the strummers to an LFO, the rate of the sequence can be played back independent of the guitar's internal clock(pitch). at the end of the recorded sequence, it restarts at the first step and plays through continuously, and there is no noticeable gap between the first and last step! very cool. i am very glad i didn't just give this little guitar back to goodwill. 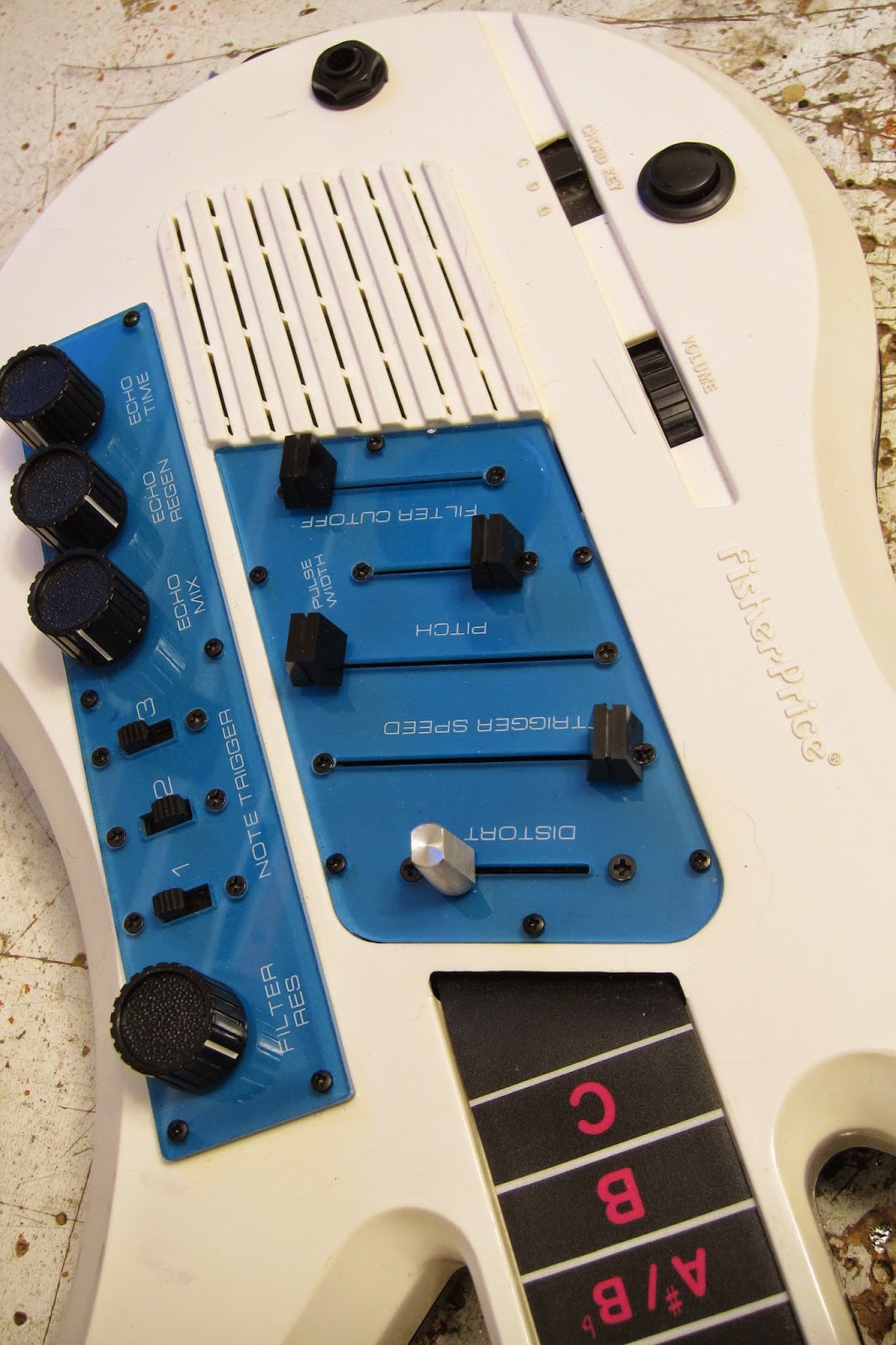 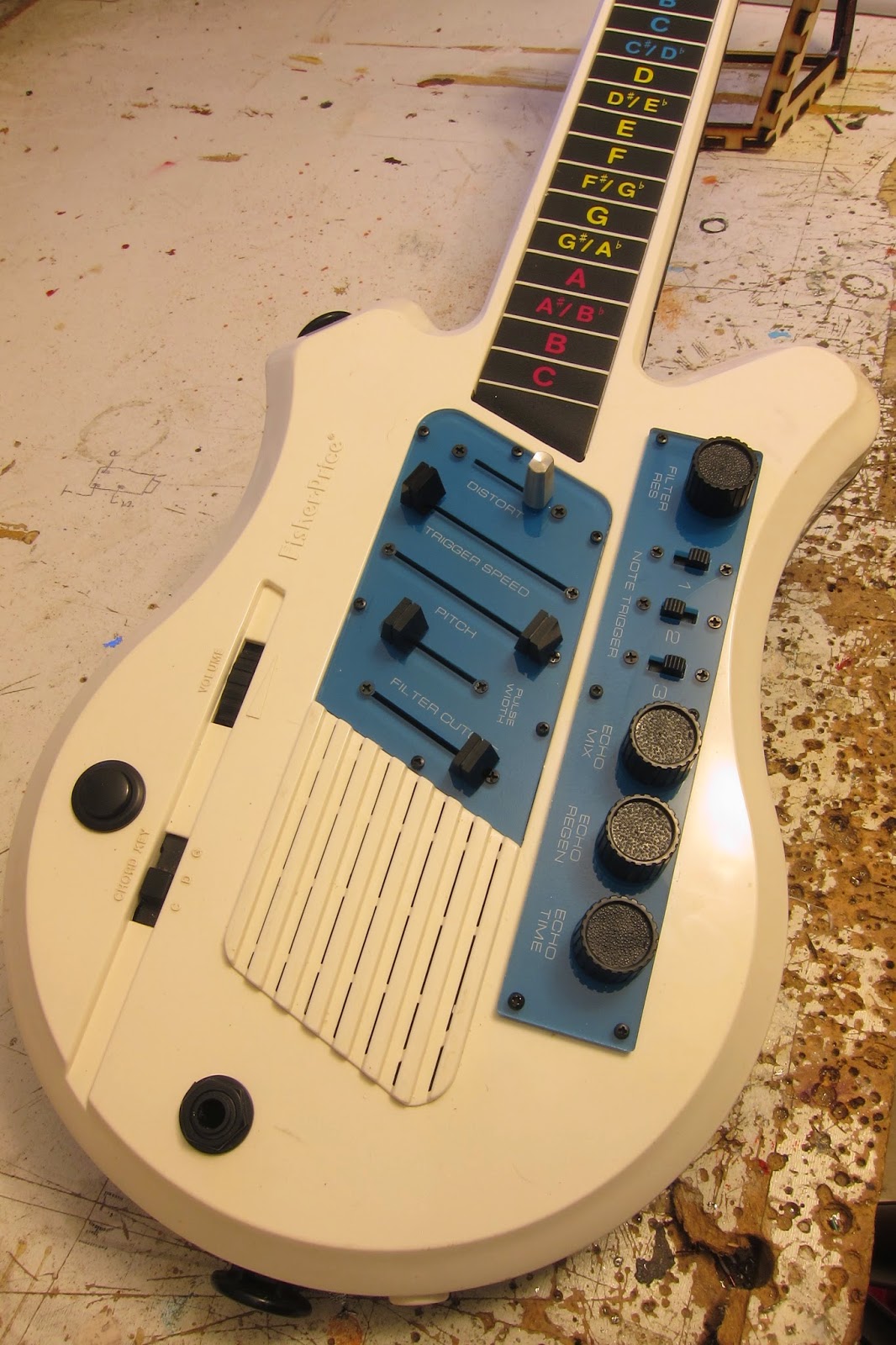 This time around, i didn't film a video.. i tried, but i wasn't able to get good footage and play cool stuff at the same time. my camera skills are just too horrible. instead, i just recorded some audio and put it to a slideshow. please let me know if this bothers anyone. just makes more sense to me.