i found this keyboard at the bins. it cost about $4 and was covered in filth. despite how dirty it was, the keyboard was in perfect cosmetic condition. i had one of these a long time ago, but i harvested it for parts because it was in such bad condition. from what i had remembered, the pt-100 is pretty limited. there are not a lot of functions on this keyboard. it pretty much just has 8 rhythms, 8 voices, and a very limited accompaniment section. after looking it up on tablehooters , i quickly got work trying out some of his mods. i thought it would be kind of cool to select the rhythms and voices through the keyboard and replace the slide switches with cutoff pots for two separate VCF's. i also replaced the volume switch with a volume pot.

the two VCF pots had to be modified. the 100k slide pots i have are really slow to slide. this is because there is this thick grease in there that slowed them down and makes them smoother. i wanted these pots to be quick so i opened them up and wiped out all of the grease. the fast action makes for better filter modulation in my opinion. originally i had planned on adding an AR generator to modulate the filter, but i soon found that this keyboard is very stingy with its mA's. this was a real problem when it came to finding a good source on the board for the VCF's and the DCO for the pitch bend. eventually i had to resort to replacing the weird power switch with a normal power on/off switch. the pt-100 has a dpdt switch for the power, but it could be replaced with momentary on and off switches because power is still going to the board even when its off. i thought this was kind of pointless so i wired the on switches together and turned the slide switch in to a power on/off switch. this way the VCF and DCO are sure to not drain the batteries while the power is off. i had the DCO running from a 5v point at the amplifier section, but it was starving the CPU for some reason so i threw in a 7805 and a decoupling capacitor at the 7.5v source, and it fixed the problem. the pitch bend is just under two octaves.

anyone who has ever circuit bent a casio pt-100 knows that there are some great distortions to be found when shorting the R/C mixer section. for my mods i added 3 thumb wheel pots. the top one distorts and de-syncronizes the PCM of whatever voice you are on. with the combination of the variable amount of the bend, the pitch bend, 6 voice polyphony, the VCF, and 12 voices, this keyboard can make some pretty interesting waveforms. the sound kind of remind me of some of the better bends found on a CASIO SK-1. the middle thumb wheel pot controls the gain of the chord section. this one can get pretty nuts too. when turned all the way up, it makes a wall of distortion that can then be filtered by the VCF. the third thumb wheel controls the gain of the bass chord. this makes the bass chord sound much richer and analog with the VCF. the bass is mixed with half of the drum section, so it shares the same filter and distortion mods as the bass. the chord and bass also share the same VCF, but there is a 3 position switch to change between bass/bass&chord/chord. the other half of the drum section which consists of the bass drum and toms bypasses any filtering and goes straight to the amp unless you turn it off via the little black switch in the middle of the keyboard. when the bass drums are off, the rest of the accompaniment gets a little bit louder even when the drums aren't playing. this kind of doubles as a volume limiter for the accompaniment section say if you want the lead to be a bit louder than the chord. the other 3 position switches are for selecting rhythms and voices on the keyboard. in the center position the keys will act like normal keyboard keys, but in the up or down positions, you can select 12 rhythms and 12 voices. this is an upgrade from the previous 8 rhythms and 8 voices that were selectable through the slide switches. thanks again to tablehooters for the idea.
alright, what am i forgetting? the pt-100 also includes a chord on/off switch, a rhythm stat/stop switch, tempo up/down switches, a demo button, and an added 1/4" line out. during this project i developed a greater sense of respect for people who circuit bend vintage casios and yamahas. i almost forgot how frustrating it is to not know what the hell anything is without a service manual. it will probably be a long time before i circuit bend a vintage keyboard again. this one took over two weeks to debug. i've had to reopen and re close this thing more time than i can recall. during all the debugging, the paint job acquired a few scratches and scuffs too. oh well, i guess thats just part of it. 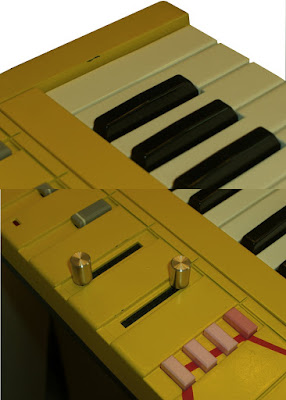 i am planning on selling this keyboard on eventually. if you are interested, just look up circuit bent on ebay in the coming week.