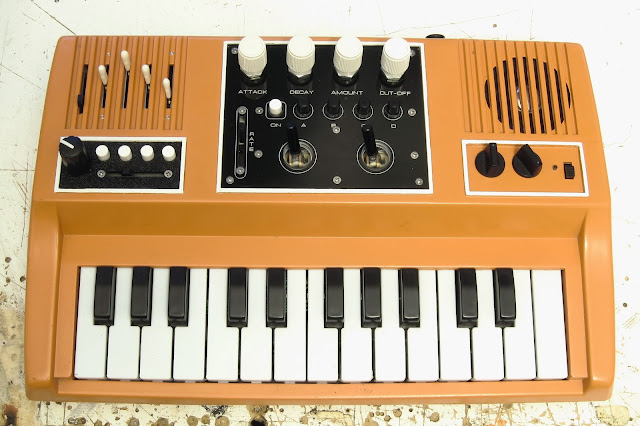 I had originally built this little mod around an EK-001 keyboard back in 2009. from what i remember, i didn't really spend too much time developing the mod and in the end there were a lot of things that didn't really make any sense or work how they should. at the time though, it was useful enough as a pretty little noise-maker. unfortunately though, some of the connections to the main chip were connected "unsafely". in the process of stripping the keyboard down and adding new circuits, i got rid of the 5 volt zener diode that protected the chip from over voltage. the entire keyboard only ran on 6 volts tops, but i assume that with the addition of new connections to certain I/O pins with no resistor protection, over time the chip started to die a little. as more time went by, keys would only work intermittently. the interface was pretty ill-conceived so it was easy to forget what anything was supposed to do, especially since the interface had no graphics whatsoever. 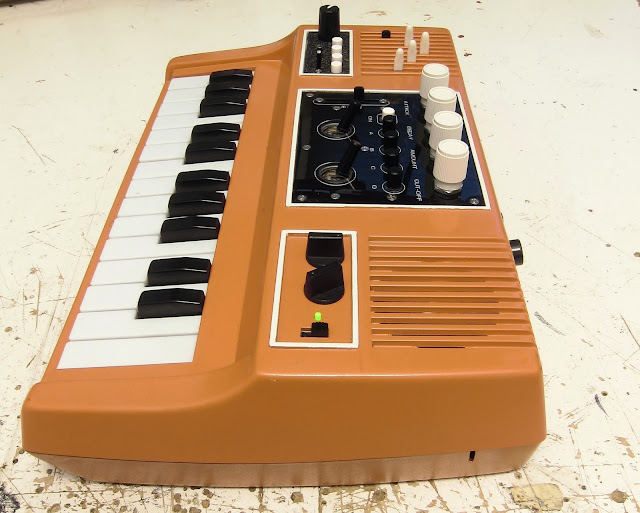 Many people have offered to buy the keyboard from me since i posted it here on my blog. i have always been reluctant though because ever since i "finished" the keyboard, i had always intended to go back and clean it up some day. well, that day finally came last week. upon power-up, many of the keys were just dead. the audio was low and the range of some of the parameters was unintelligible... i had figured that the problem with the keys was cosmetic, so i thought i would spend a day or so cleaning up the circuit and applying some of my new knowledge to some of the keyboards' shortcomings. when i opened it up though, i quickly found that working around hot-glue and unnecessarily long wires, that this circuit might be too much trouble. especially since i didn't ever get around to drawing a schematic for this circuit. i had kind of assumed that i would find this situation. i usually do when i go back into a project after a few years. i didn't hesitate to rip everything out. not just the circuits, but all of the hardware too. it had all been hot-glued in, and though hot-glue can be great for putting this stuff together, it can be a pain in the ass to work around, especially when trying to add new hardware. the only bit of hot-glue i didn't rip out was what was holding the power switch and two potentiometers in the right-hand corner of the interface. they are mounted really well so i was able to use them in a pretty similar way in the end. one pot would be a master volume pot, and the other would be a tuning knob for the master pitch. the power switch would stay a power switch.
After gutting everything i had to decide how the new circuit would work. i wanted to keep most of the functions the same as had originally been designed, so i based everything off of that. the keyboard chip was totally fried so i had to use a new one. originally the keyboard's two voices were combined and sent to a frequency divider that spit out 4 octaves that were then mixed by a mini-joystick. the combined voice then went to a pretty crappy little VCF that was modulated by an extremely crude AR generator. i think it may have been my first ever attempt at an envelope generator so needless to say, it was not too versatile. also, i hadn't yet figured out how to trigger and envelope generator with the envelope signals coming from the keyboard chip, so it could only be triggered with the LFO. this must have been pre-oscilloscope-noystoise. the new approach would be to use my latest method for generating an AR generator for the EK001. there would be two separate envelopes for each voice. each voice would have its own filter that would be modulated by its respective AR generator. before being sent to their respective LM13700 based filter, each voice would be sent to its own frequency divider. the original keyboard frequency and 3 sub-octaves would then be combined with the voice's designated mini-joystick. the two voices' octave mixers would be independent, but the Attack, Release, Amount, and Cut-off controls for the two filters would be controlled together using some dual-pole potentiometers i found. as for the original eight timbres that the EK001 is capable of, i have learned that there are actually only 4 separate timbres. the other 4 are just gated versions of the original 4, and don't respond well with the new envelope generator, so i won't use them. 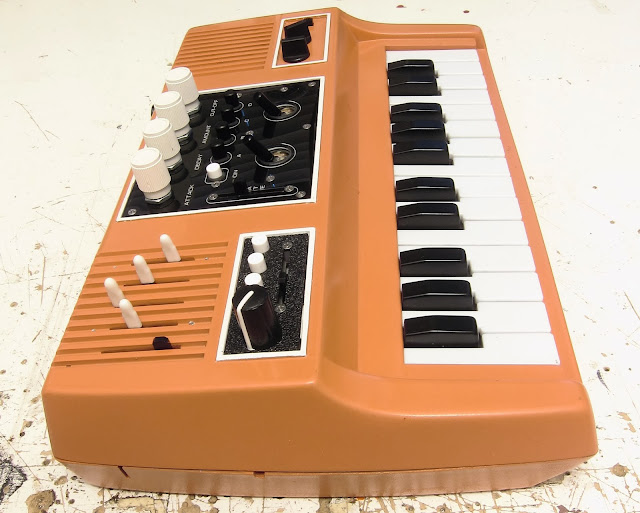 I have always had trouble selecting a method for pitch-bending the EK001. i have tried transistors, vactrols, opto-isolators, jfets, and even voltage control over the internal clock, and nothing has given me decent results. one thing i had never considered though is using a VCO chip. i had a bunch of 74ls124 laying around so i rigged one up and thought, what the hell, why not? i disconnected the timing resistor and connected the VCO output to one of the terminals. no change. i tried the other terminal, BZZZT, it works! i tried some different timing capacitor values for the VCO chip until i found a good range, and now the pitch of the keyboard is voltage controlled. the VCO chip actually has two CV inputs. one is the frequency control and the other is the range. the range CV has less range so it would be used as the pitch-tuning. the frequency control CV would be used as pitch-bend/LFO input. the LFO would have three shapes; saw, reverse-saw, and triangle. 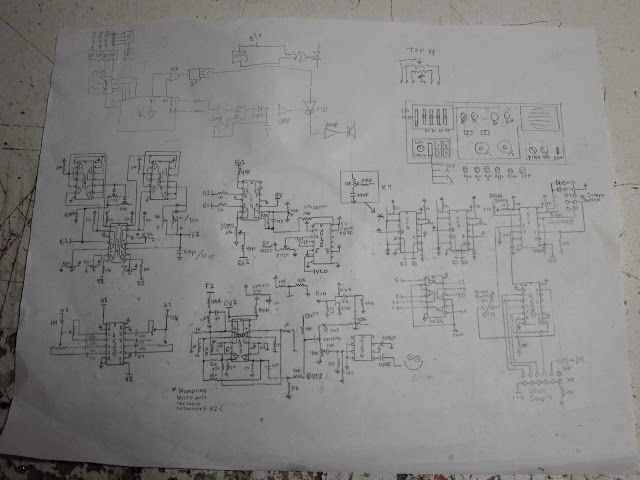 All that was left then was the drum machine. originally the keyboard was able to access all of the eight preset rhythms, start/stop buttons, and tempo buttons. there was also a custom section that used another 4520 divider chip to be able to trigger the four drum sounds at 5 selectable sub-frequencies of the master clock. each drum sound had its own six position switch to select one of the 5 sub-frequencies or the off position. this was a good way to make beats but it was nearly impossible to sync them with the preset rhythms. also, the rhythms that the divider produced were just too simple. they needed some swing. i decided that in the interest of space, i would do away with all of the original preset rhythms and all of their necessary buttons. instead i would use the divider chip to gate four separate LFOs that would then trigger the drum sounds at their independently set frequencies. the Reset pin on the LM556 LFO would be connected to the six position switch, so in theory, if the LFO frequency was set lower than the reset frequency, the drum sound would only trigger once upon each reset. i bread-boarded one and it seemed to work, so i drew up my schematics, double checked them, and drew up a circuit board for my CNC to cut out. i made one circuit board for the melody section, and another for the rhythm section that also included the VCO. i wanted to keep the VCO as far away as possible from the analogue filters to avoid crosstalk. it helped. once the circuit boards were populated, wired, and working, i designed and cut the new face-plates with my laser-cutter. i also created a nice little regulated/diode-protected AC adapter input. the keyboard was coming together despite some issues i was facing trying to connect the hardware that was mounted to the top shell of the keyboard to the circuit-boards that were mounted to the bottom shell of the keyboard. i like to keep my wires as short as possible, so quick-connects were very helpful here. now if the keyboard shell is taken apart, the two pieces will only spread about an inch before you have to disconnect things. this was great for space but bad for debugging... 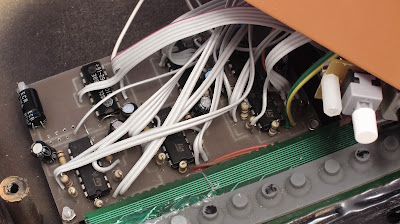 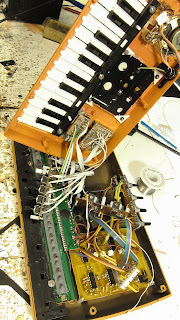 I finished the keyboard and closed it up. i started playing with it and noticed some issues with the envelope generators. they would not re-trigger for some timbres, while others would attack fine, but never release. i opened it up and had a look i must have plugged it into the AC adapter too, because when the keyboard was opened up on my worktable, it didn't have any problems at all. i put it all back together, but at the time i still didn't understand why it was behaving that way. oh well. i played it some more and noticed that the rhythm section was kind of erratic, and the EG's were doing that thing again! eh, i'll fix it tomorrow... the next day i opened it up and quickly found that the reason the EG's were being weird was because the batteries were drained. duh. the drum machine on the other hand was critically flawed. apparently gating the reset pin on an LM555 or 556 will not put a high signal on the output pin upon reset. it makes sense because the state of the output can't change until the timing capacitor is charged or discharged. my timing capacitors are 47uf so they take a little while. it also seems that if the gating frequency is higher then the LFO frequency, i takes the remaining discharge time plus the charging time of the capacitor to reach the initial triggering of the drum sound. well that's nice to know! after about a day of trying to come up with the solution to the problem or just possibly making it kind of work, i came to the conclusion that there was pretty much no way for me to get the results i had originally wanted with the circuits that were already built. instead i went back to the original design where the drums would only be triggered by the sub-frequency of the master clock. however, the sixth position of each switch would route the respective LFO to its drum sound. the reset pins of the LFO's are gated by the 1/4th output of the master clock frequency. this configuration seemed to give the most consistent results. in the end it gives each of the four drum sounds a good "roll" mode. 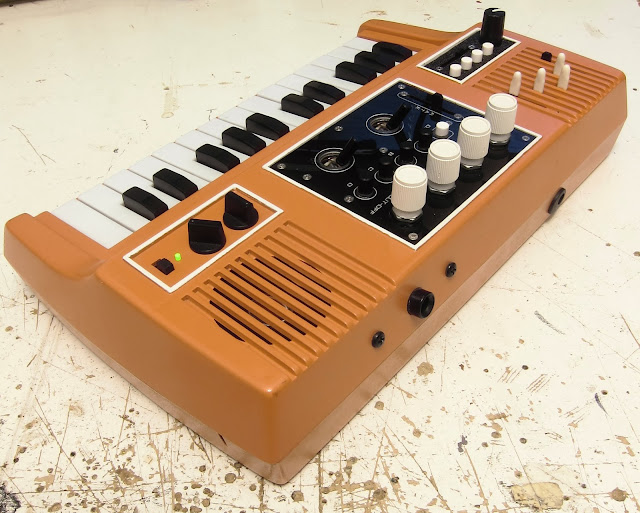 All in all it turned out pretty great. the keyboard really growls and has a warm organ quality to it. at times it can be dark sounding but not too serious. i'm sure whoever does end up buying it will really enjoy making beautiful music with it.