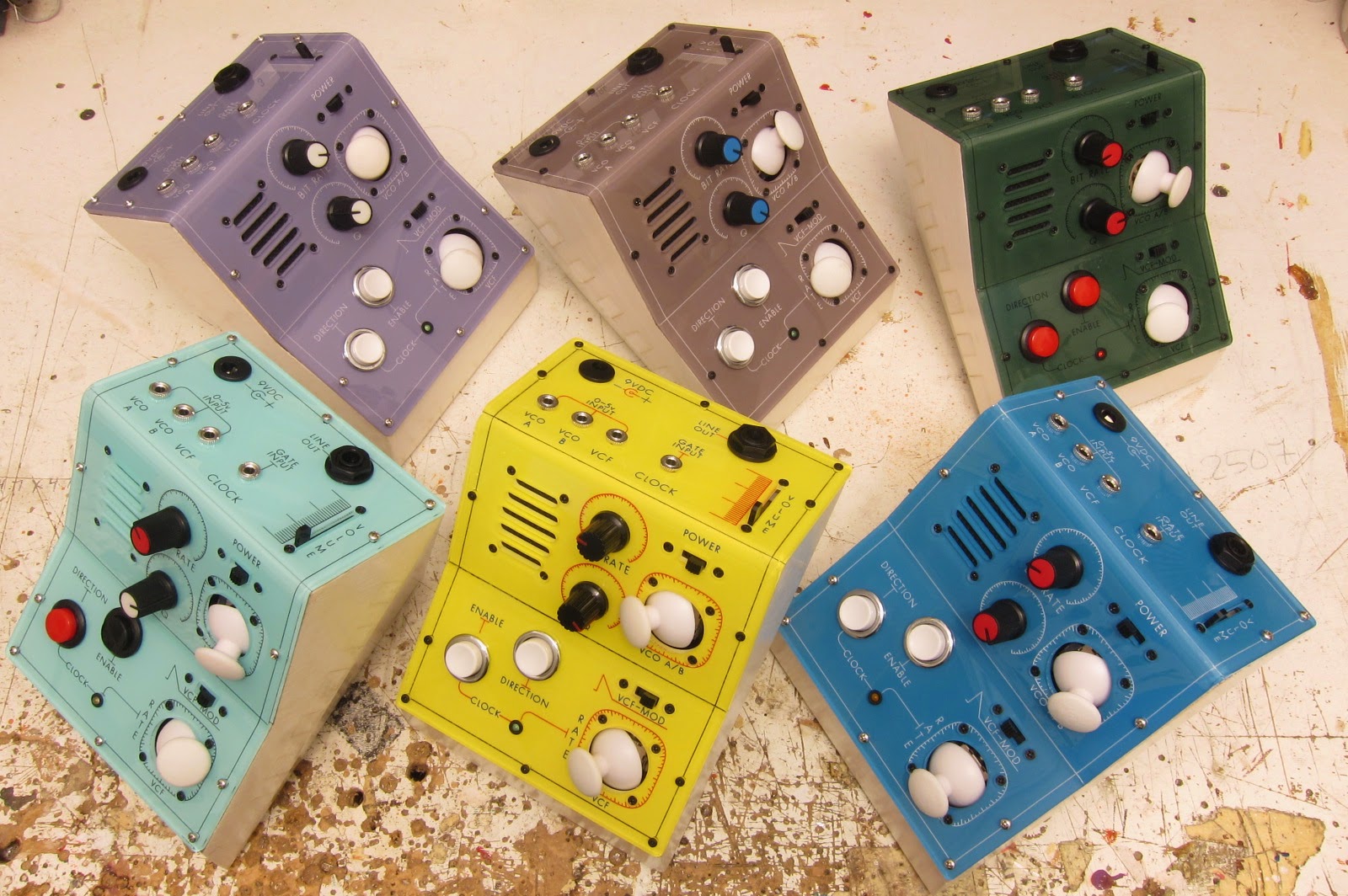 Ahhh... internet at last. been having trouble with my connection for the past week or so. haven't had the opportunity to post. the NT03 is the latest of my NT(noystoise) series. i initially started developing the NT03 in early November of 2014. the first of the six was completed at the beginning of December, but a commission came my way, so i put the rest on hold for a month before finally finishing them all. unfortunately the commission fell through. thankfully it was only one month wasted. hoping to quickly recoup my losses, i cranked out the final five NT03's in record time(two weeks), only to find that my 3 month old CenturyLink DSL router was all dried out. one after another, i finally got a replacement that works(for now). now to catch up! 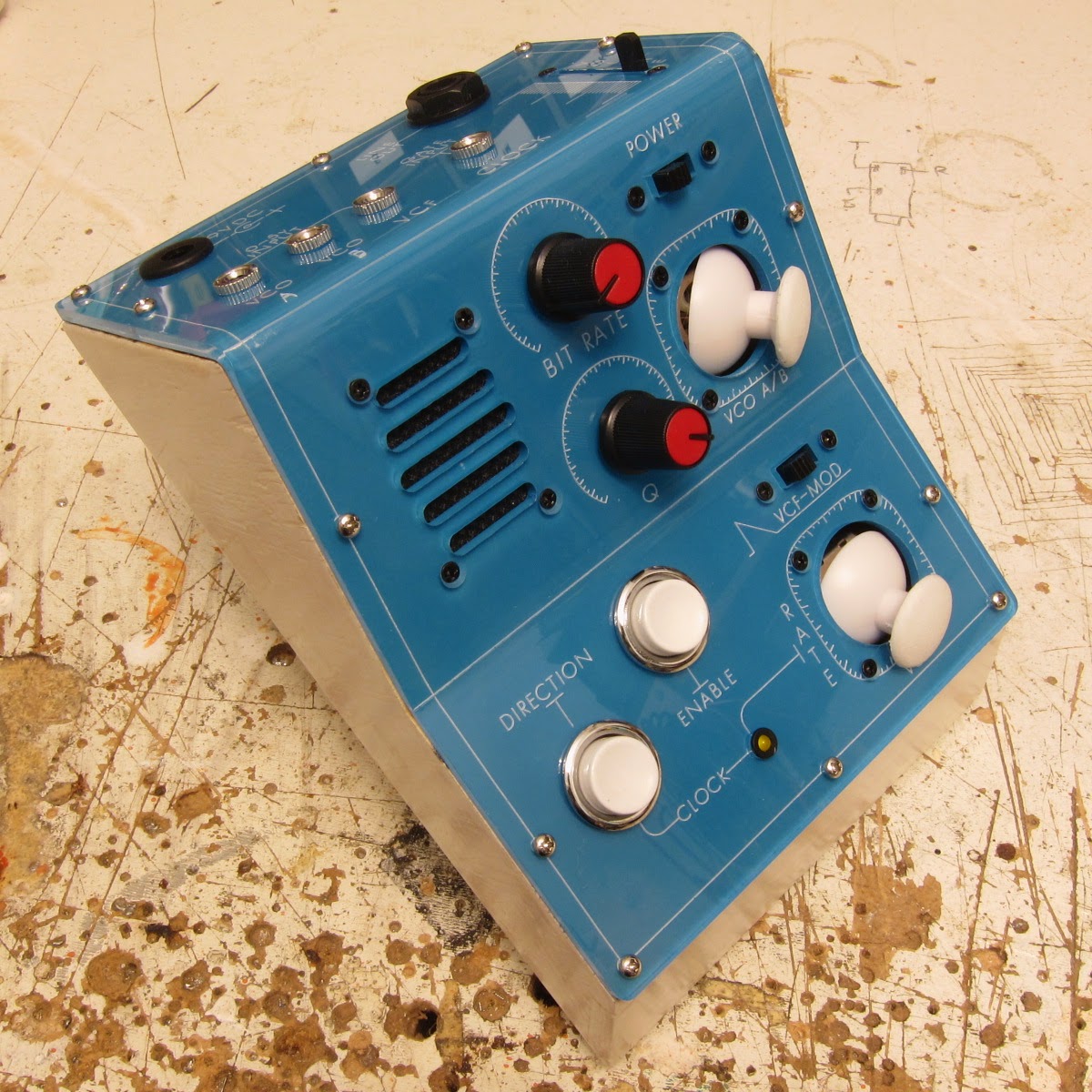 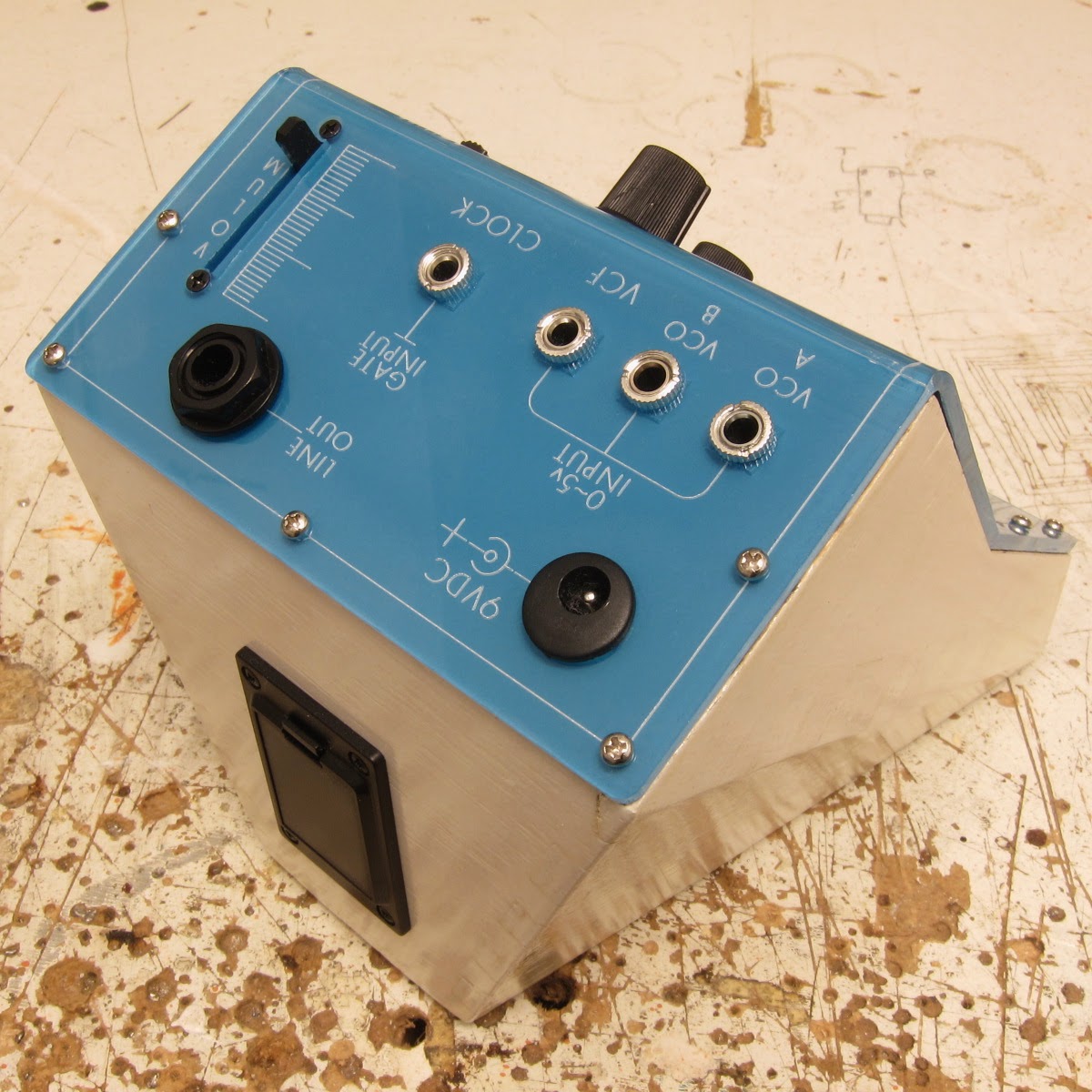 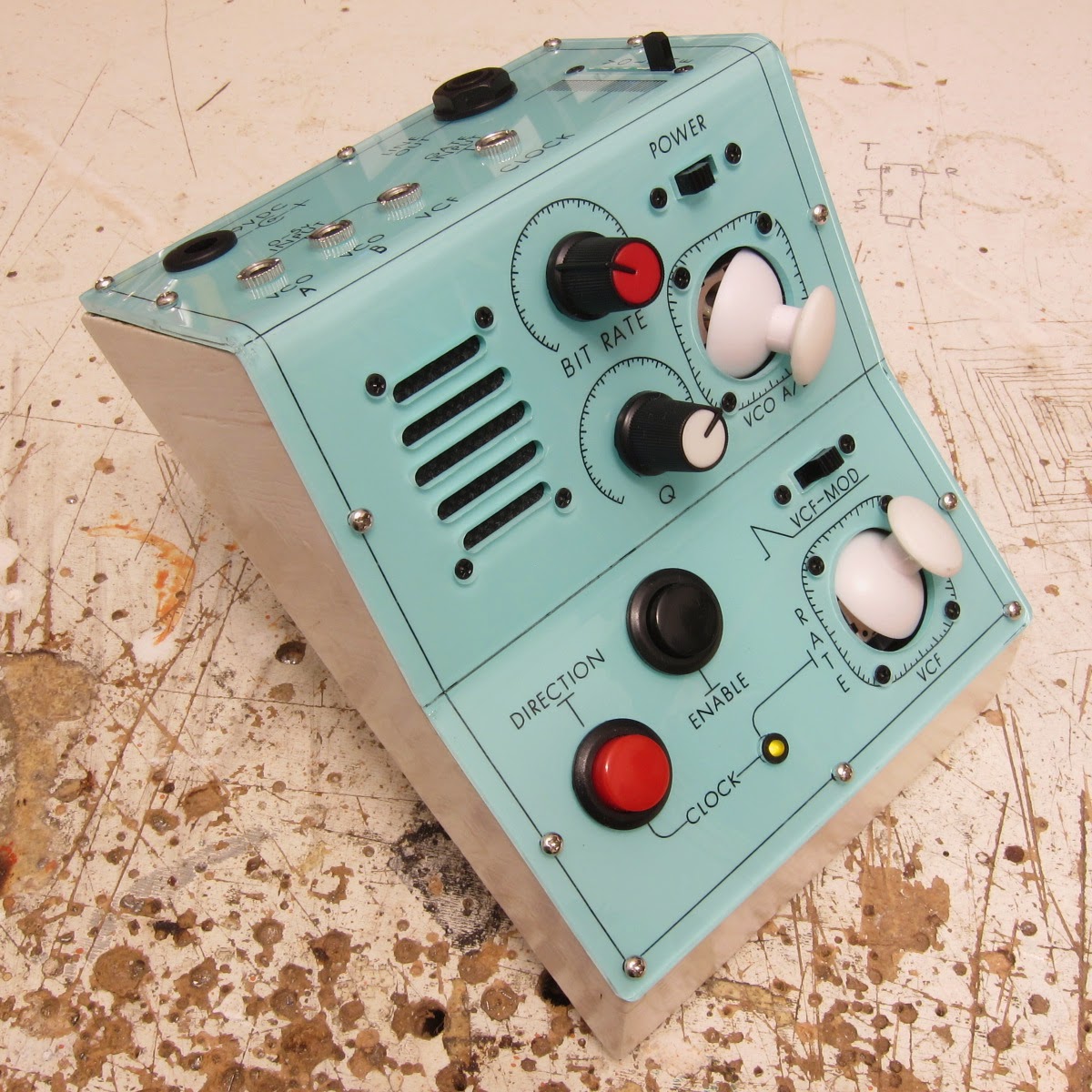 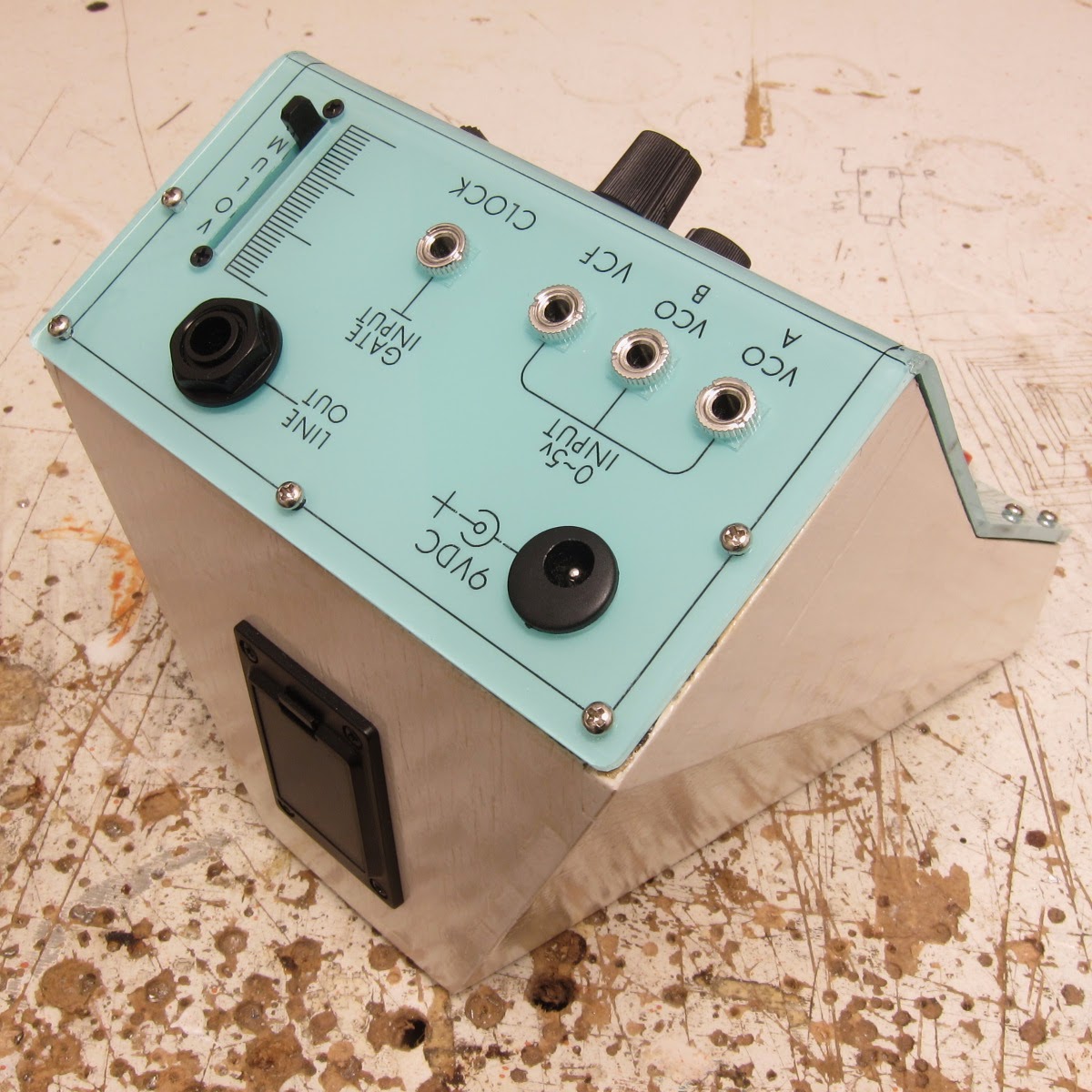 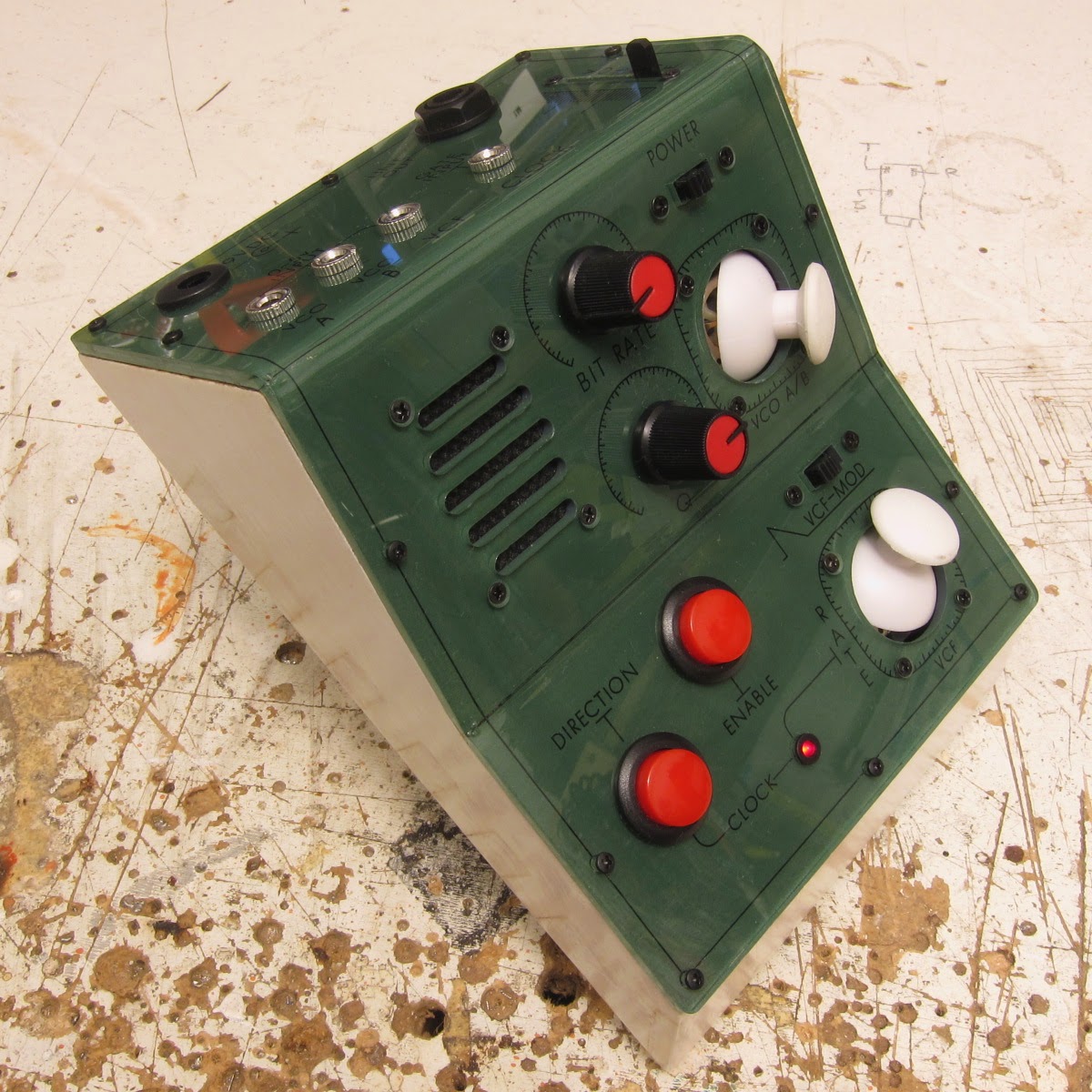 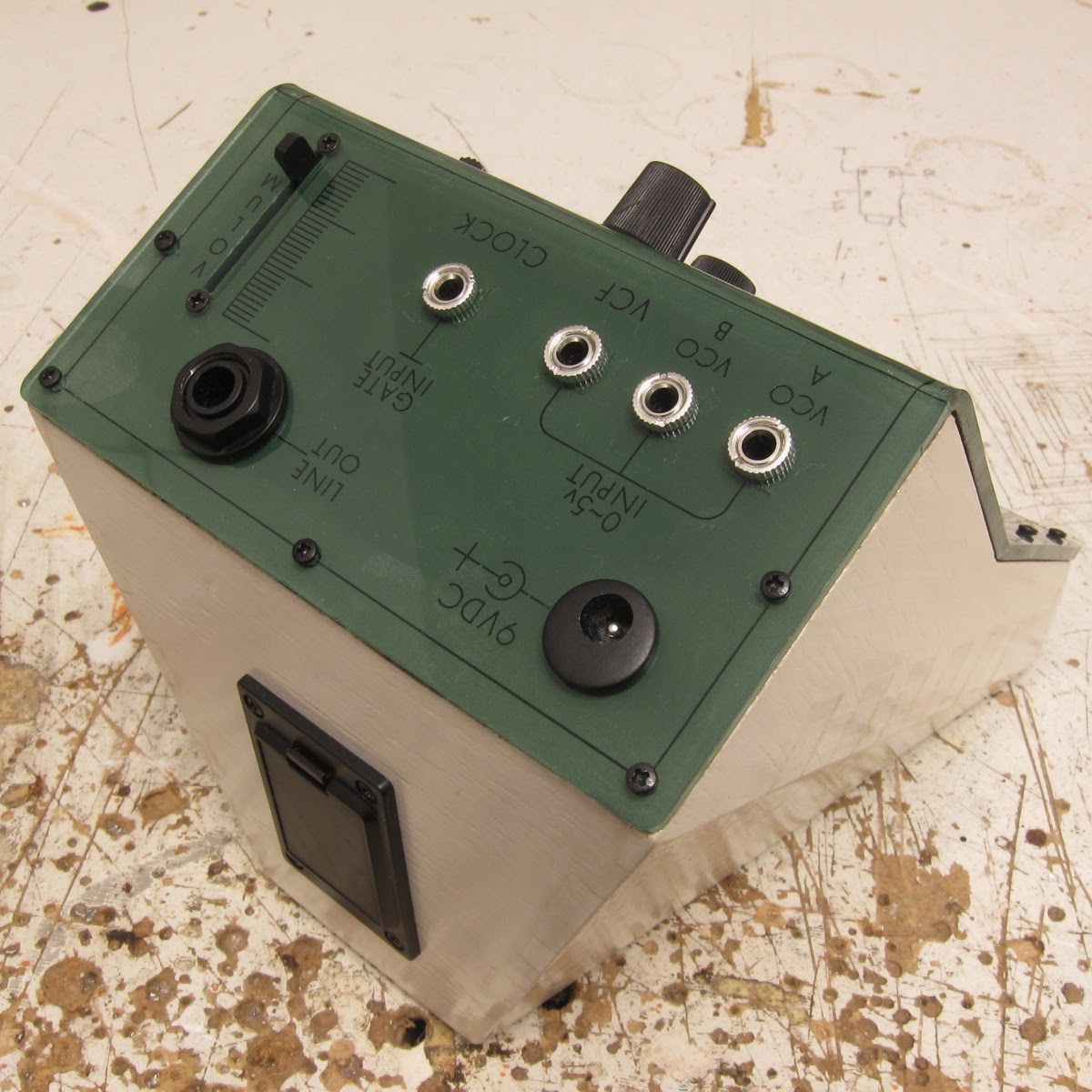 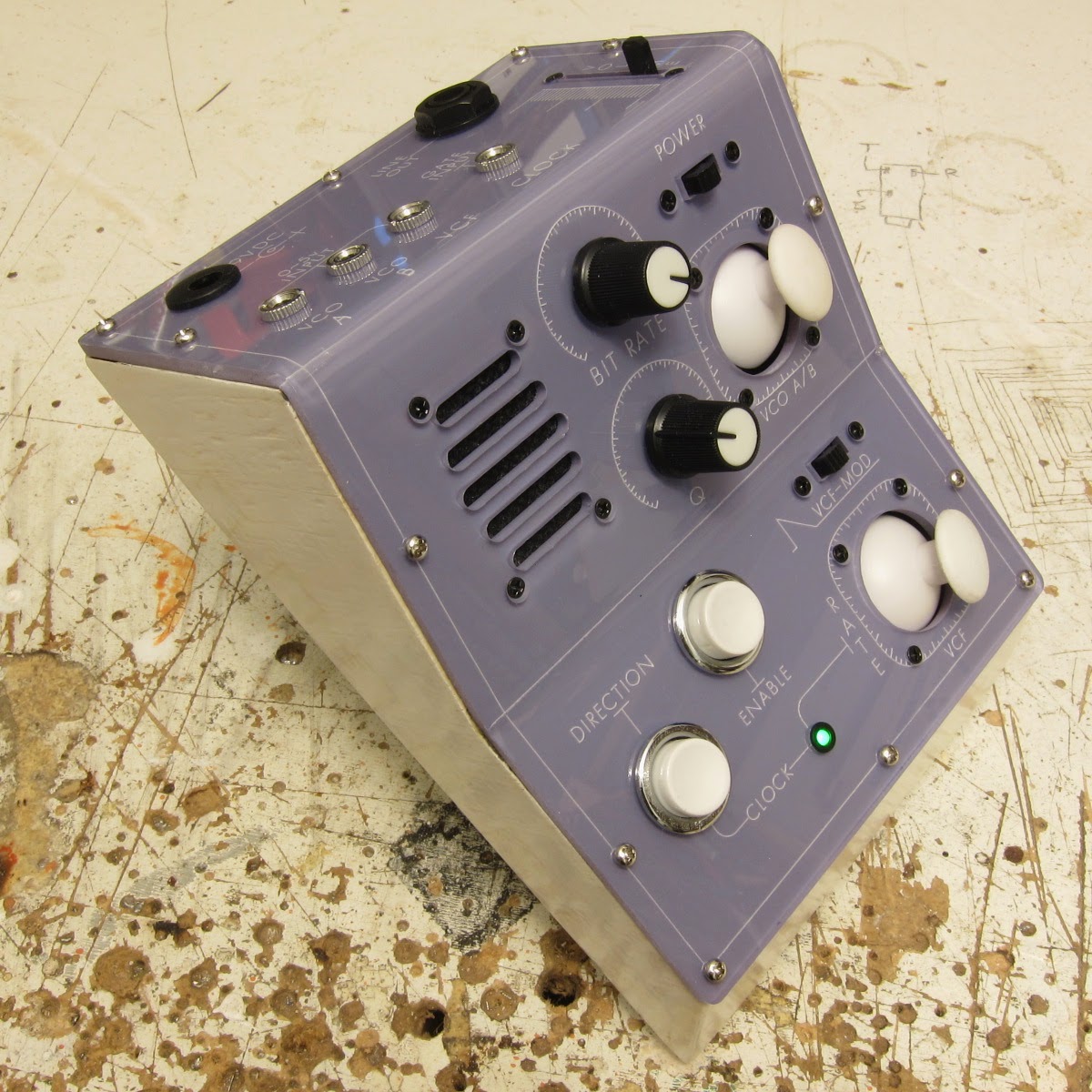 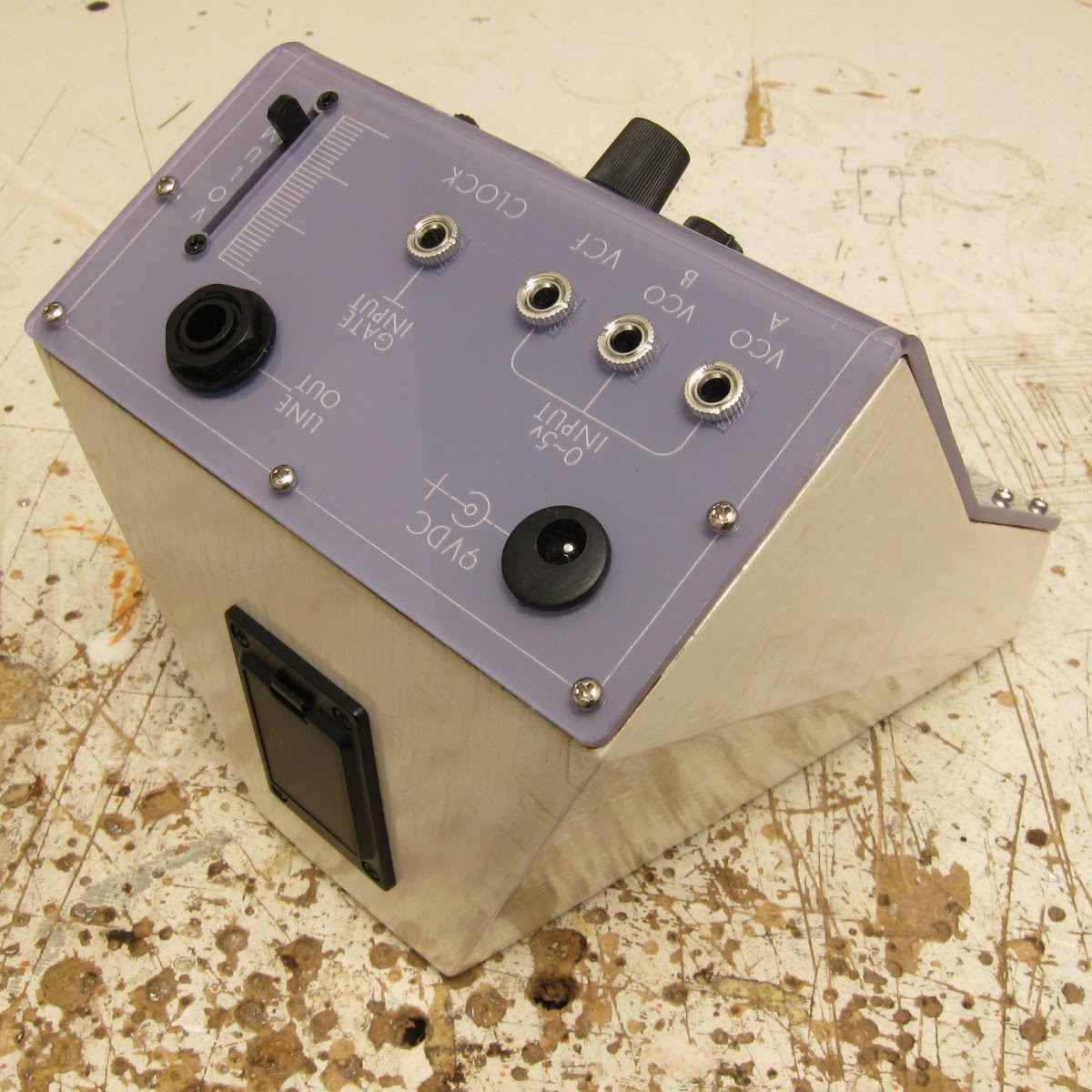 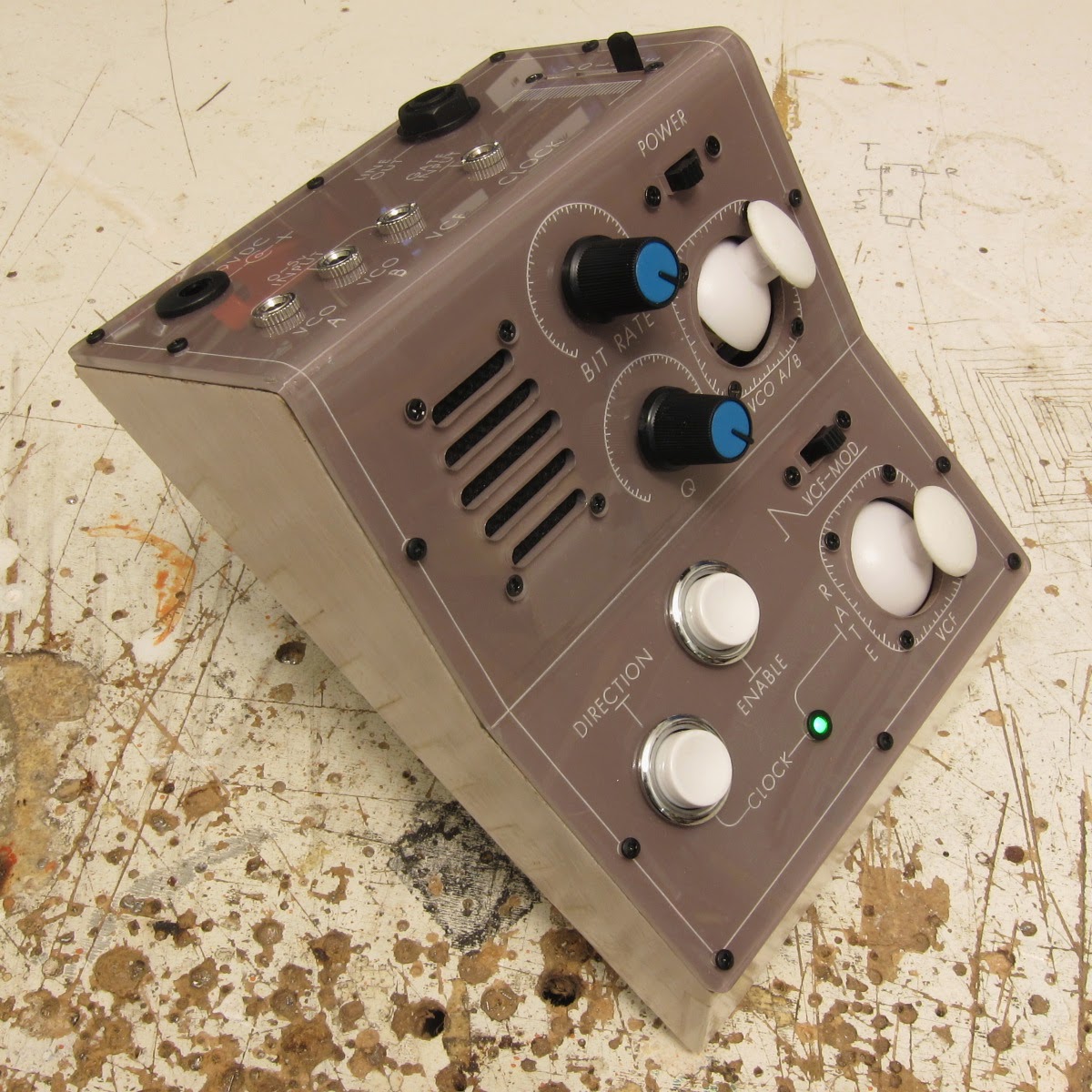 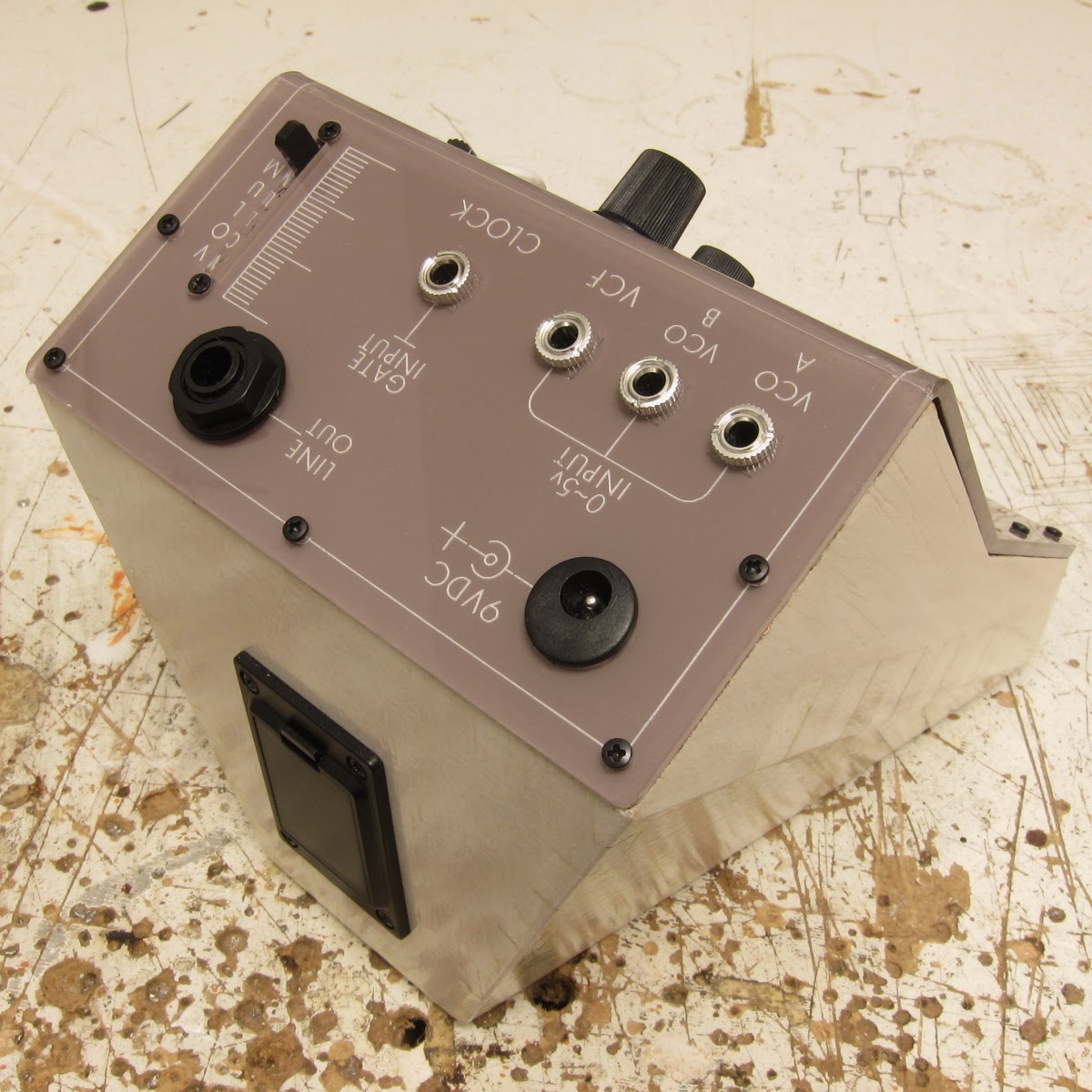 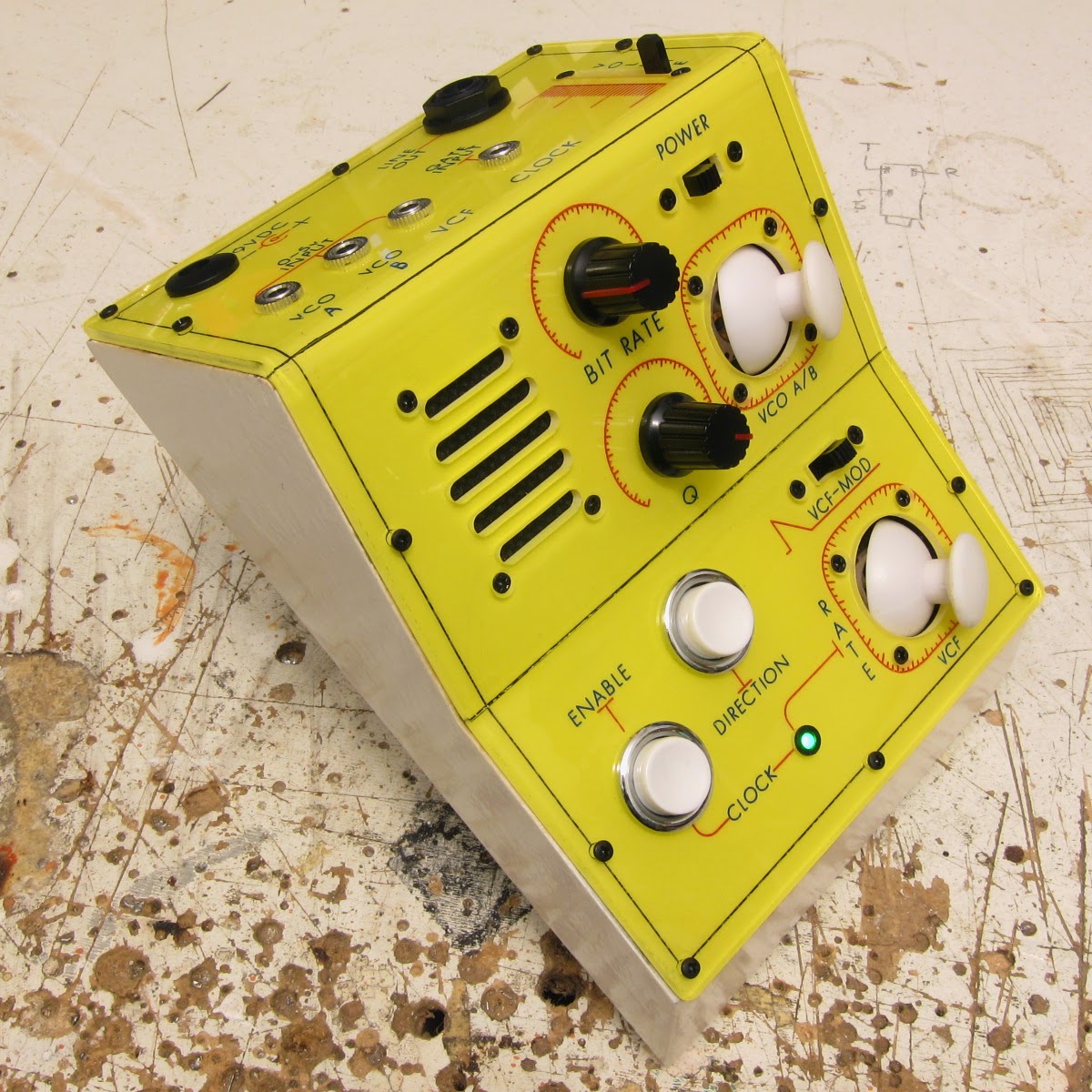 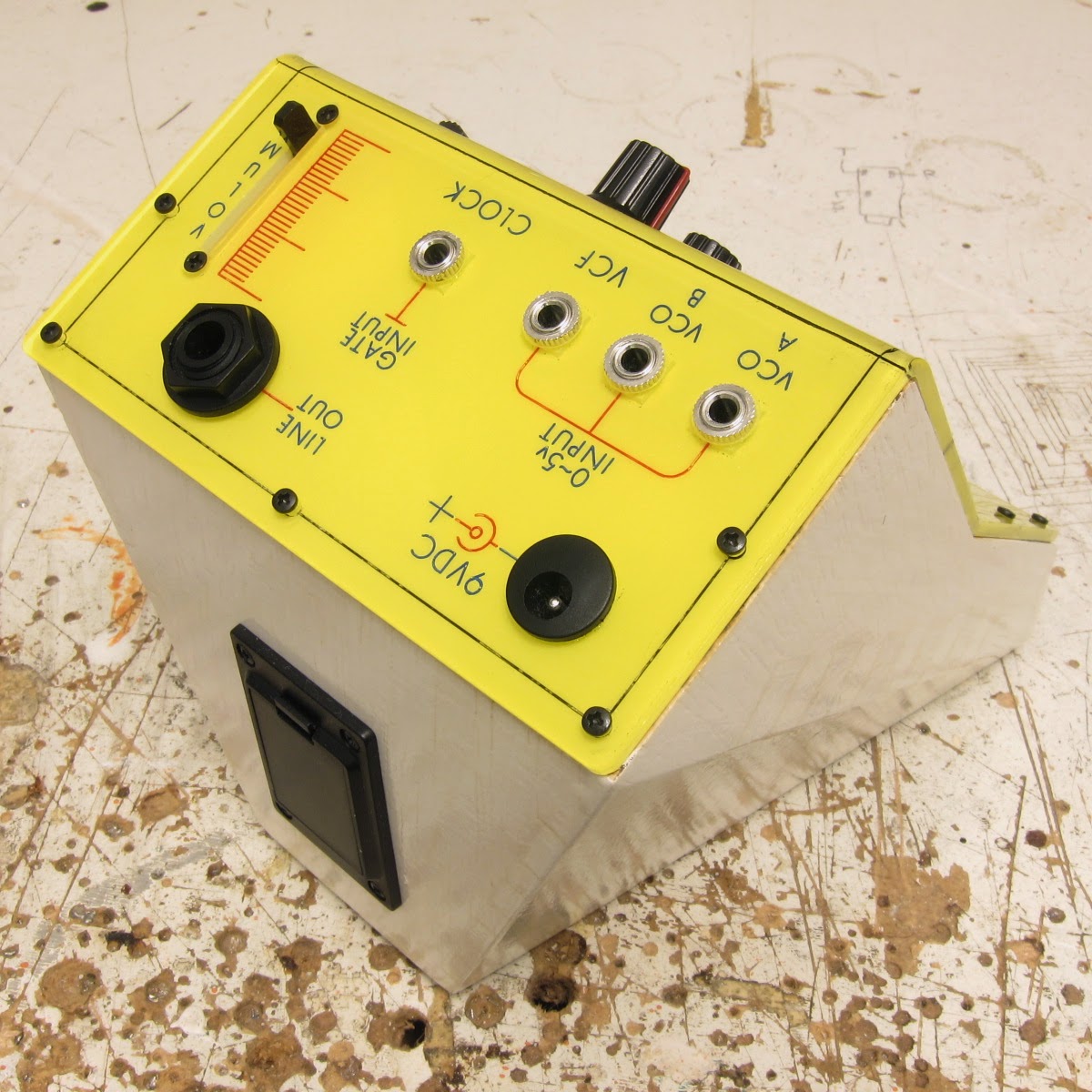 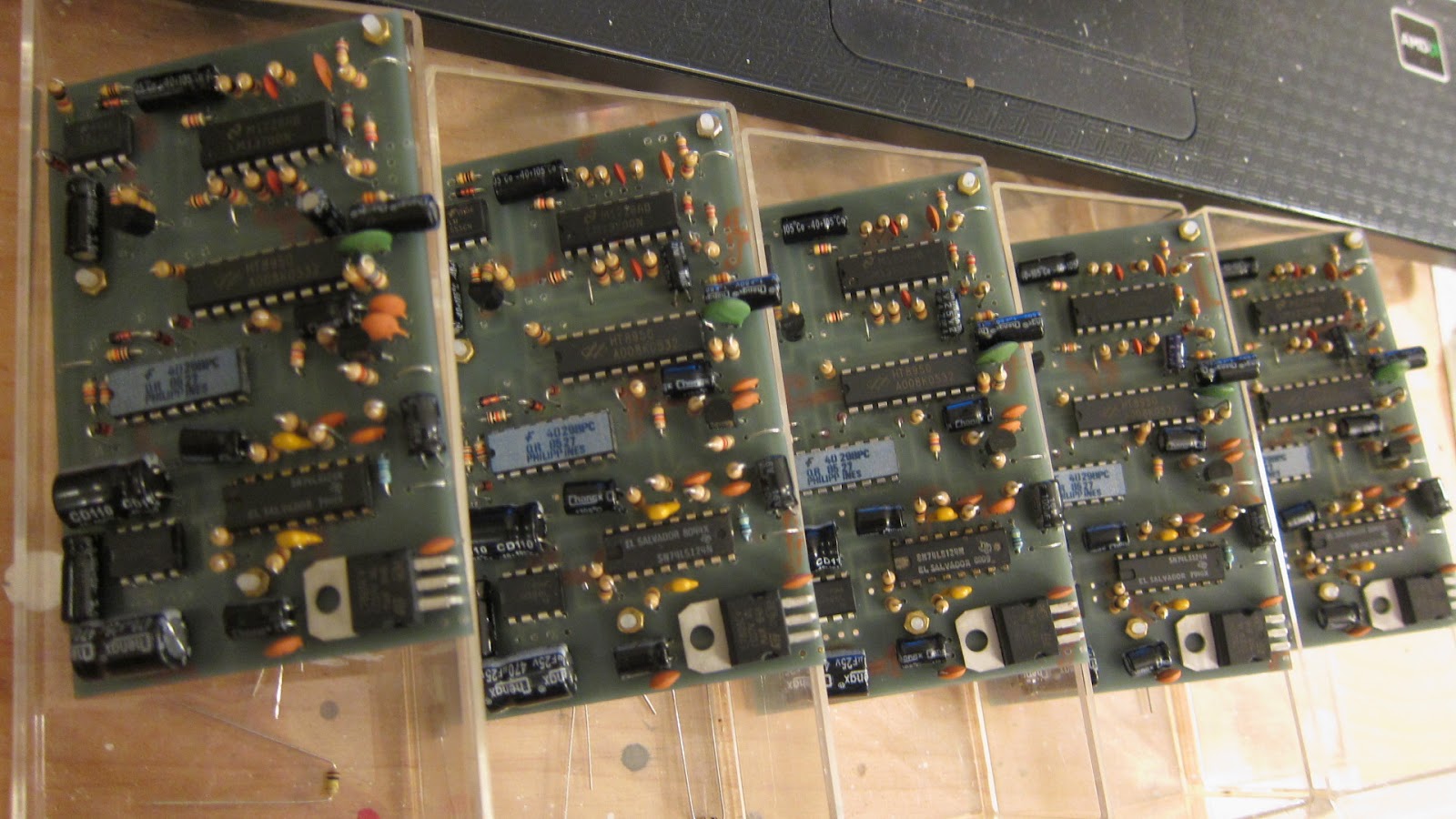 The two VCOs are made up of one 74LS124 dual VCO chip. i was able to get a pretty good deal on these chips some years ago, but i haven't really put them to much use. this felt like a good opportunity to use them. i also had a few holtek HT8950 chips that needed to be used. the HT8950 is basically just what you would find in one of those toy megaphones that turns your voice into a robot voice(all circuit benders should know what i'm talking about). the difference in the HT8950 is that in addition to being able to incrementally select the pitch setting of the modulator, there is also a three bit parallel input that can be used to select the chips' eight pitch settings; Robot, x2, x1.6, x1.3, x1, x.9, x.8, x.6. the sample rate(BIT RATE) is resistor set. initially i tried clocking the UP/DOWN inputs on the 8950 with an external oscillator, but found that there is a pretty significant debounce protocol built in. this makes it difficult to achieve faster transitions at lower sample rates, so instead, i built an eight step parallel sequencer from the CD4029 chip. this way the eight pitch modes can be accessed quickly with no debounce(latency/stutter). the sequencer can also advance in either direction. 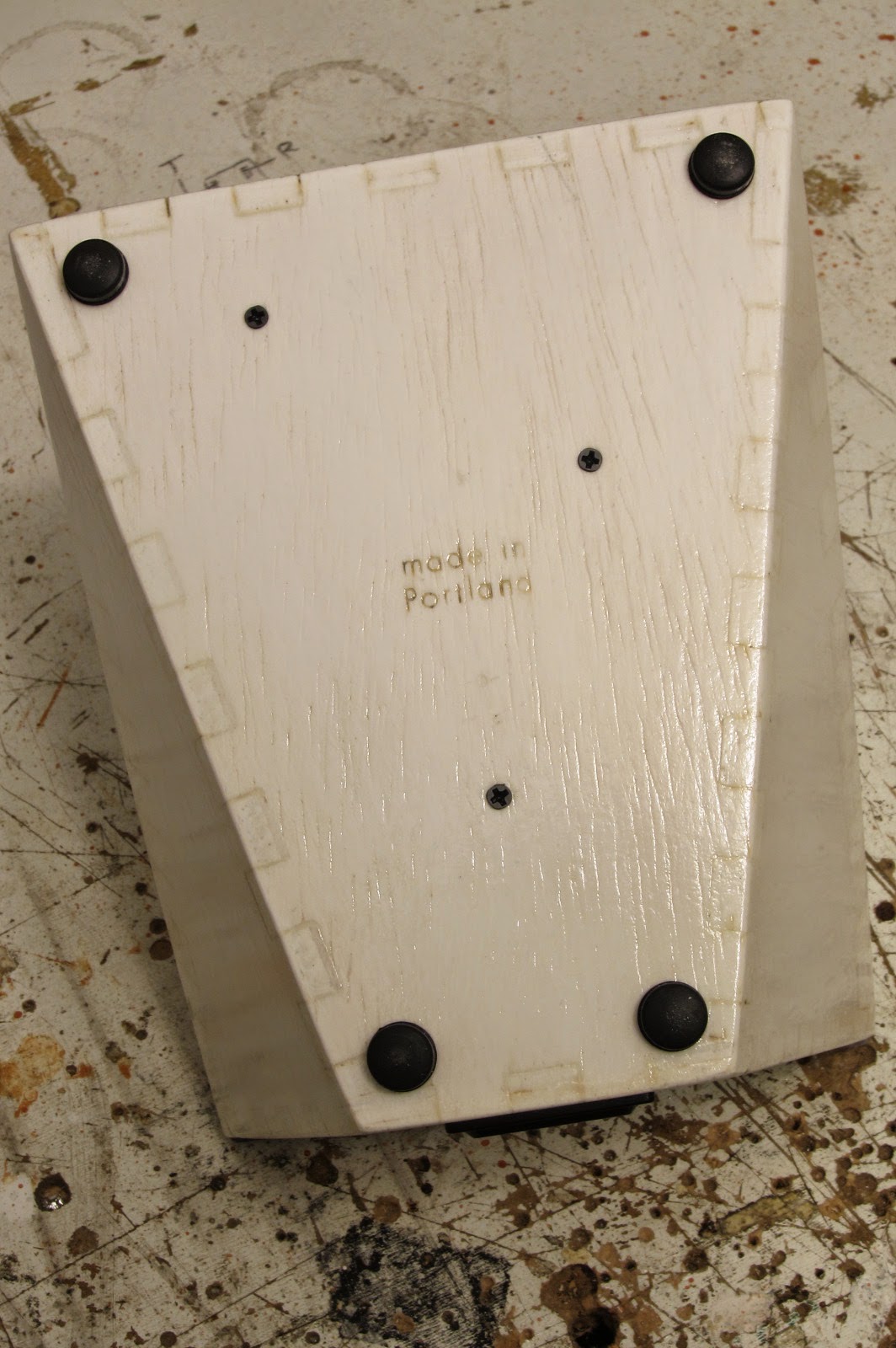 After the two VCOs are mixed and sent through the voice modulator, they are then sent to a resonant 12db lowpass filter(VCF). the filter's cutoff can be modulated with an envelope derived from the sequencer clock, but the attack and decay of the envelope are preset. the filter cutoff, pitch of VCOs 1&2, and the sequencer clock rate are all controlled by one of four joystick axis. the 3D joysticks are a recurring theme in my NT series. this time i decided to use all white thumbsticks, just because they seem to go with everything. they do tend to get dirty though.. 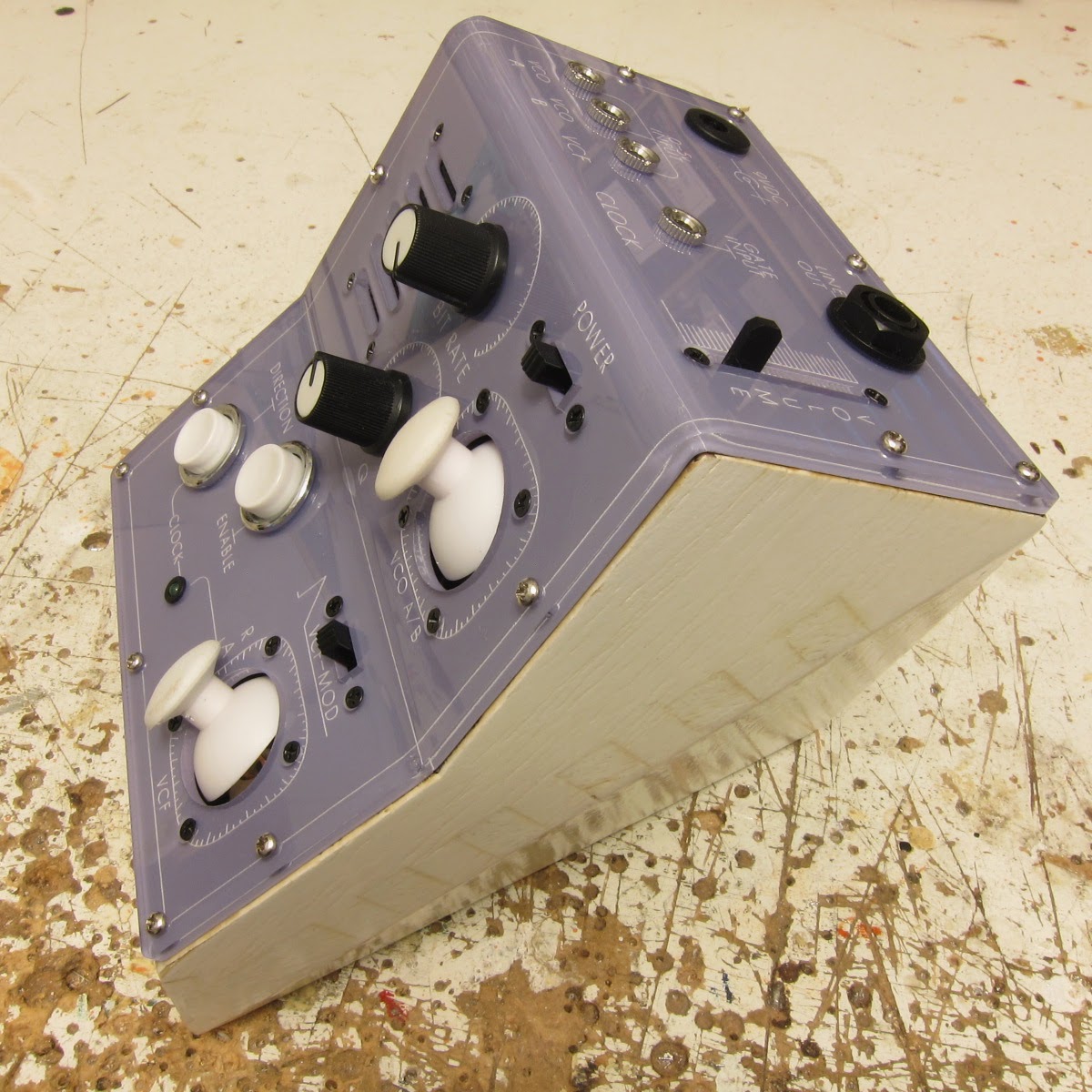 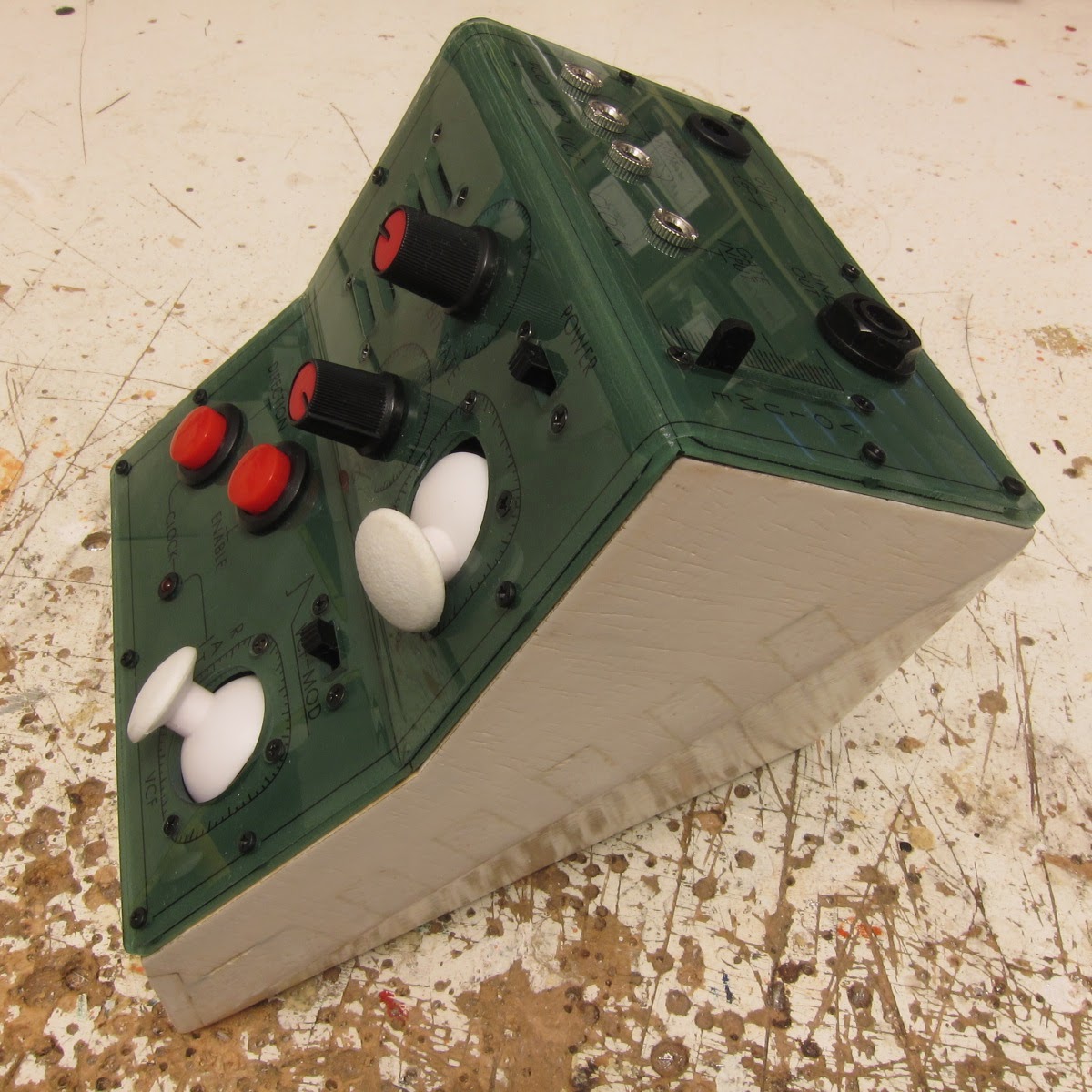 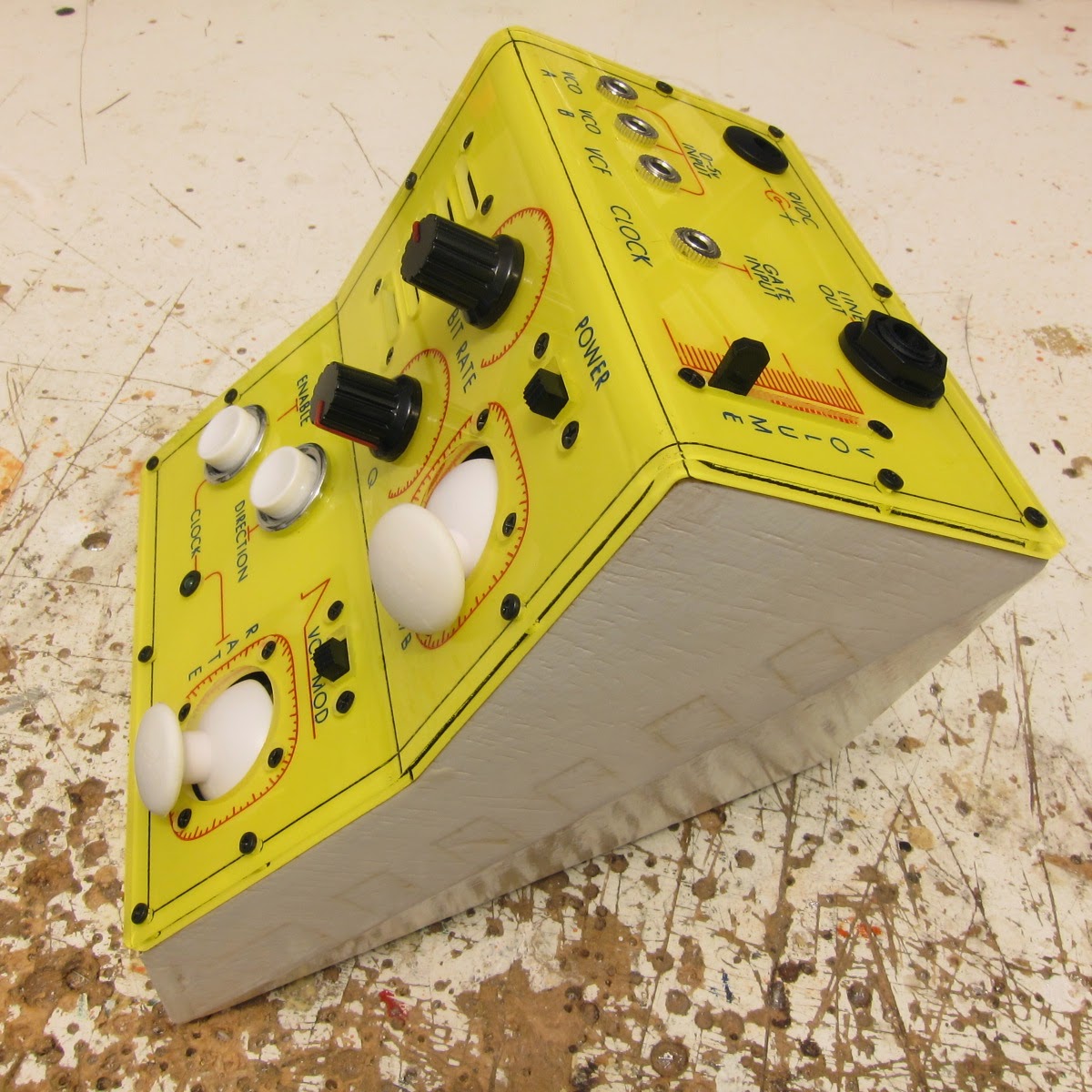 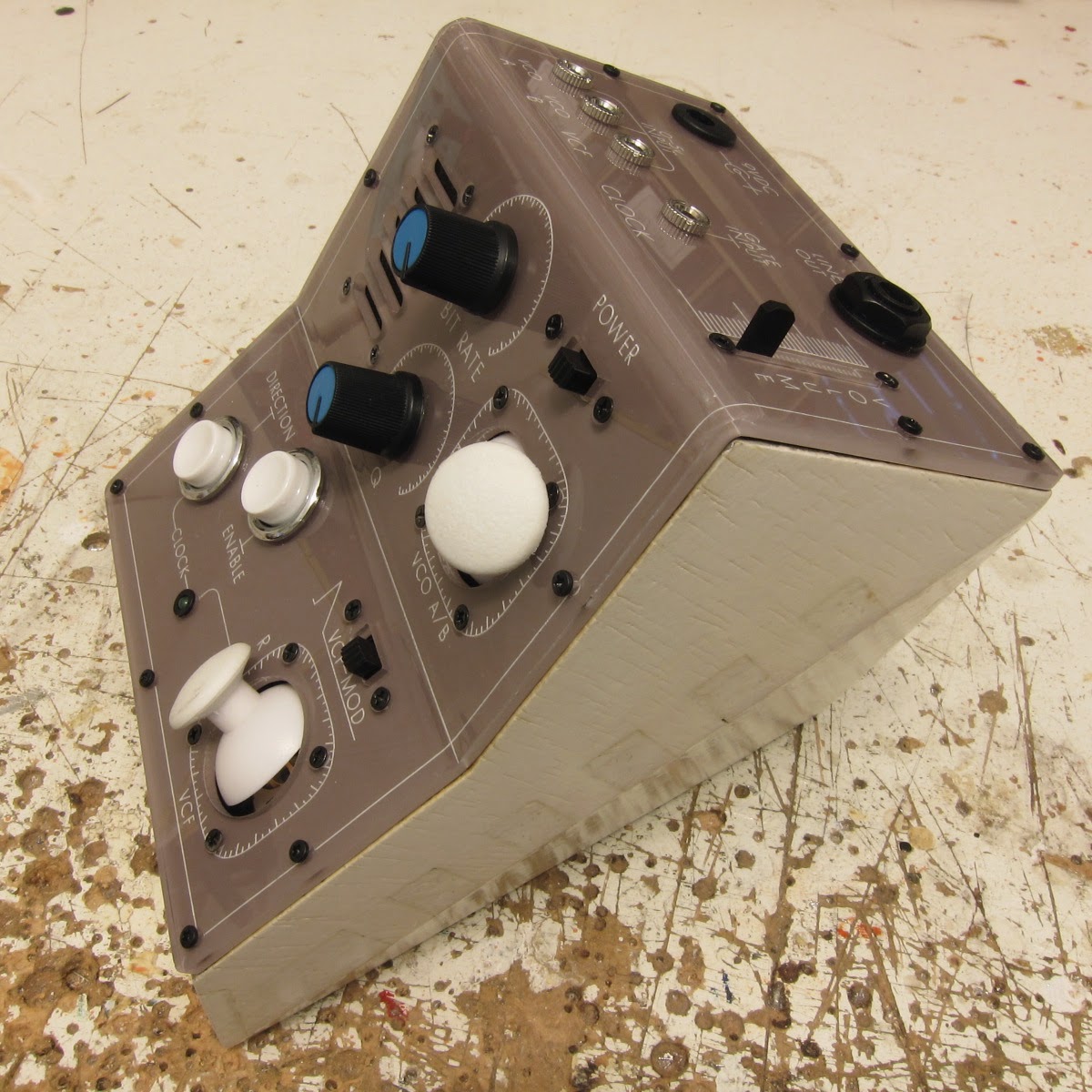 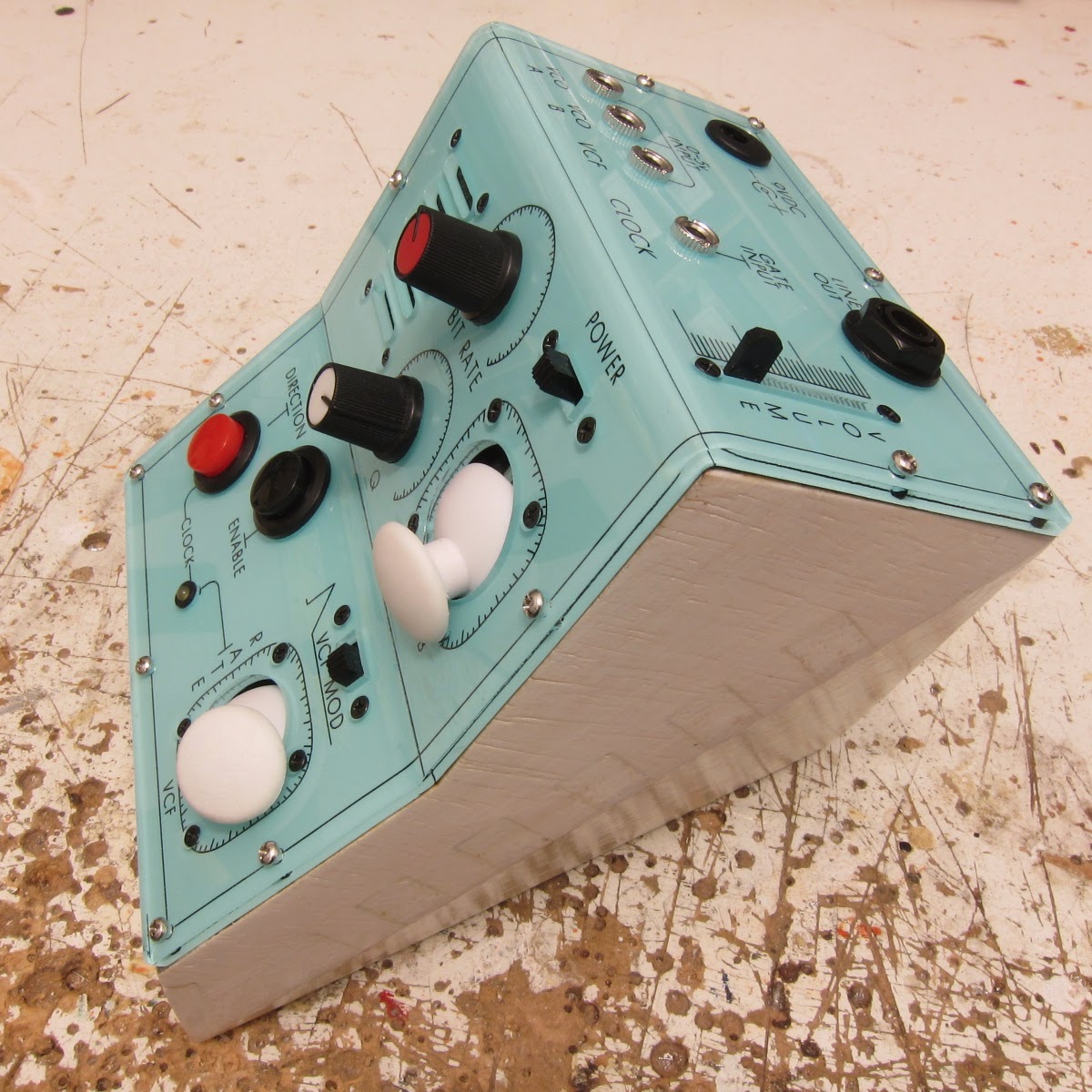 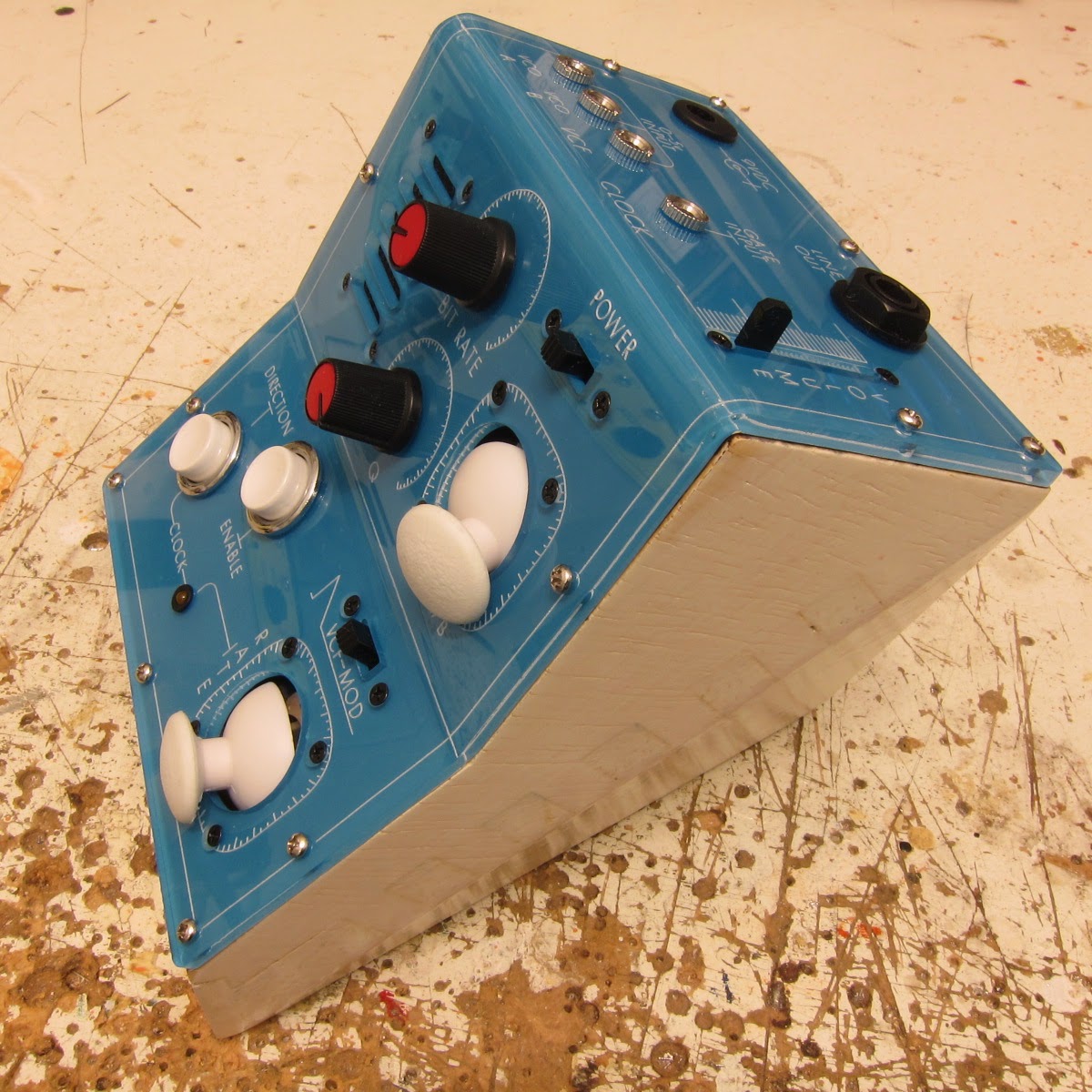 Each of the four joystick parameters can also be controlled externally, although the joystick still controls the maximum threshold of the incoming control voltages(CV). the frequency of the sequencer clock cannot be controlled with a CV, but it can accept incoming clock, or negative going gates. the sequencer clock can be triggered internally and/or externally. to advance the sequence internally, there is an 'ENABLE' switch, and a 'DIRECTION' switch. the DIRECTION switch controls the direction of the sequence with either internal or external clock advance input. 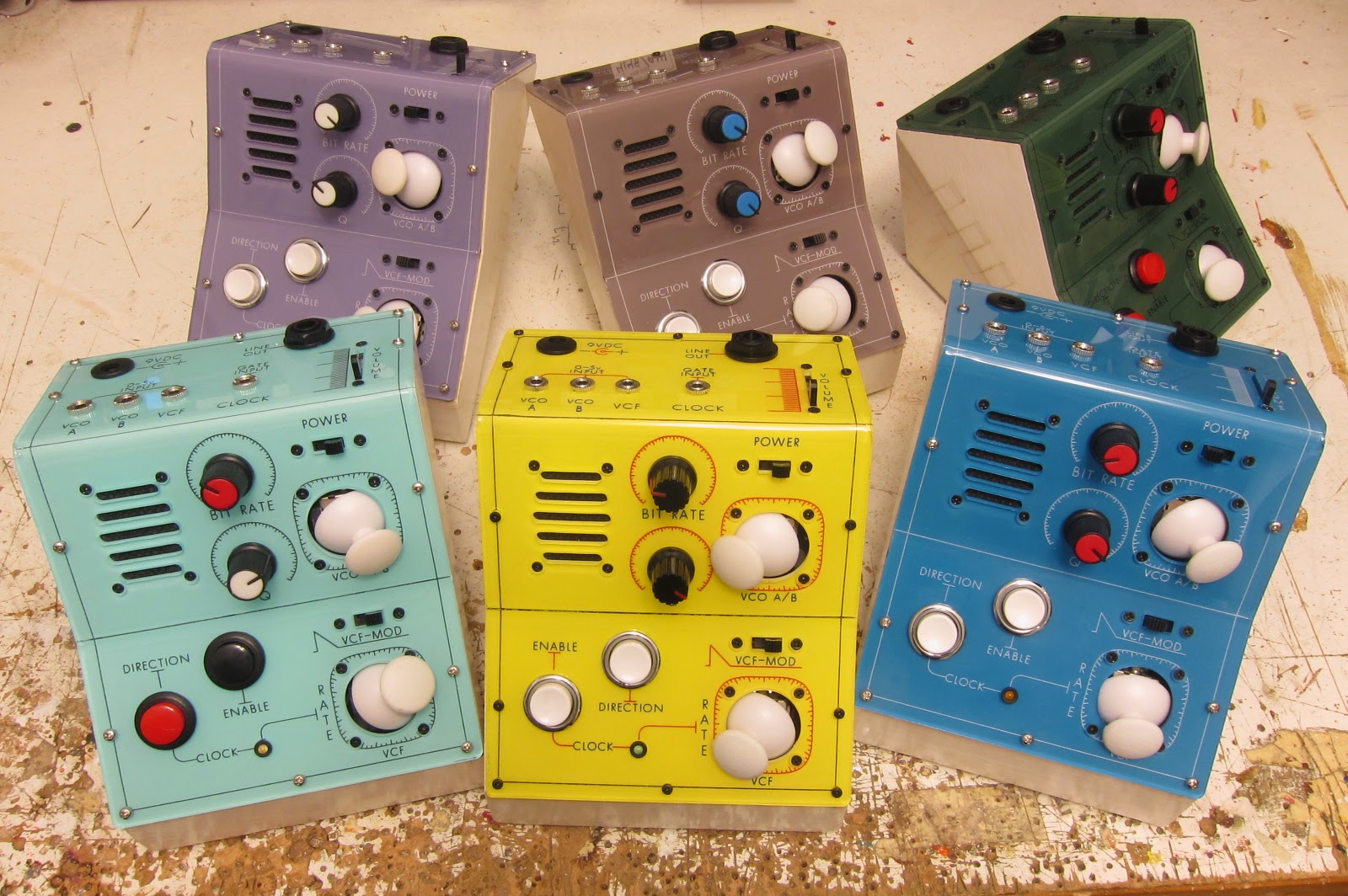 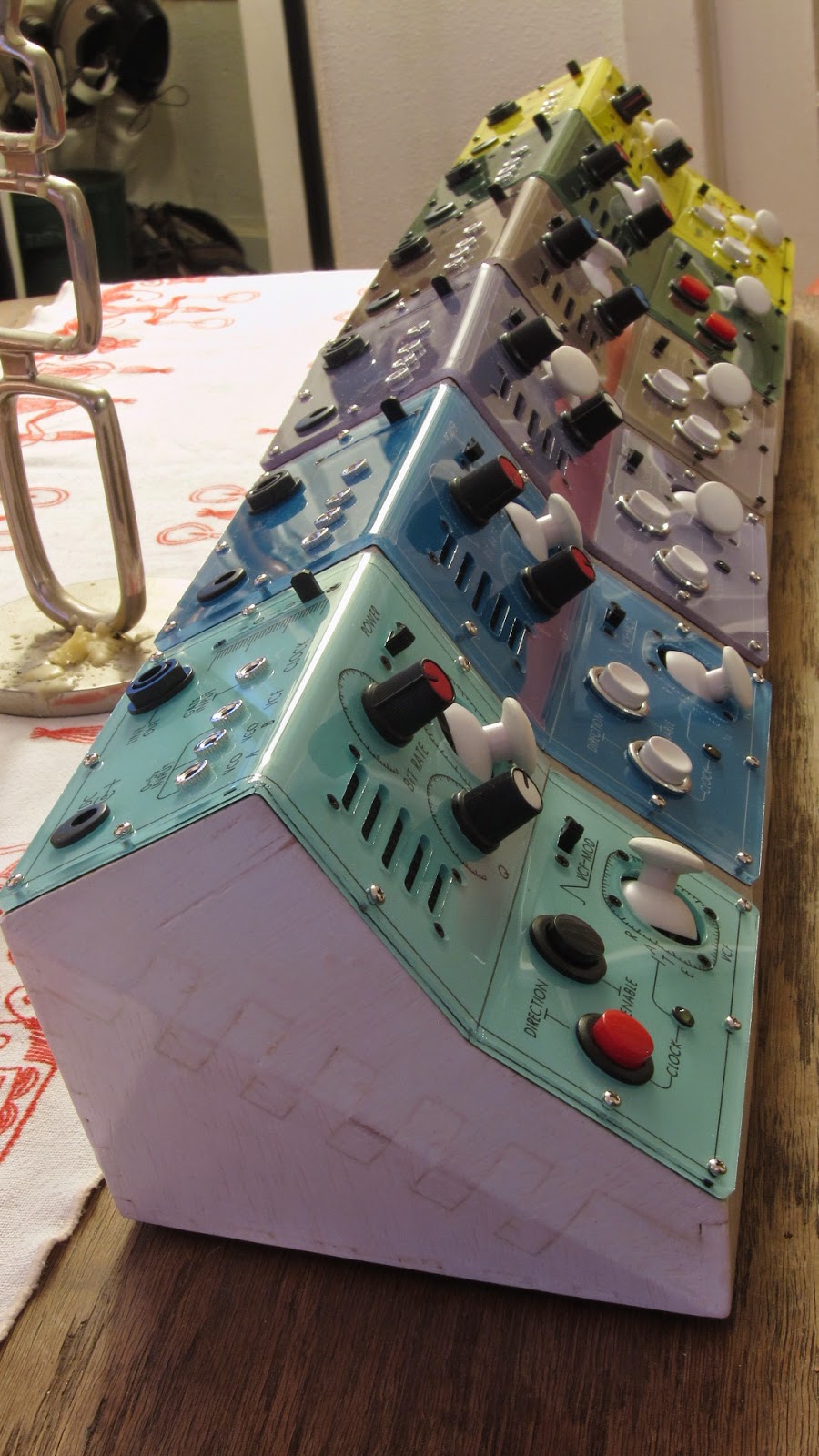 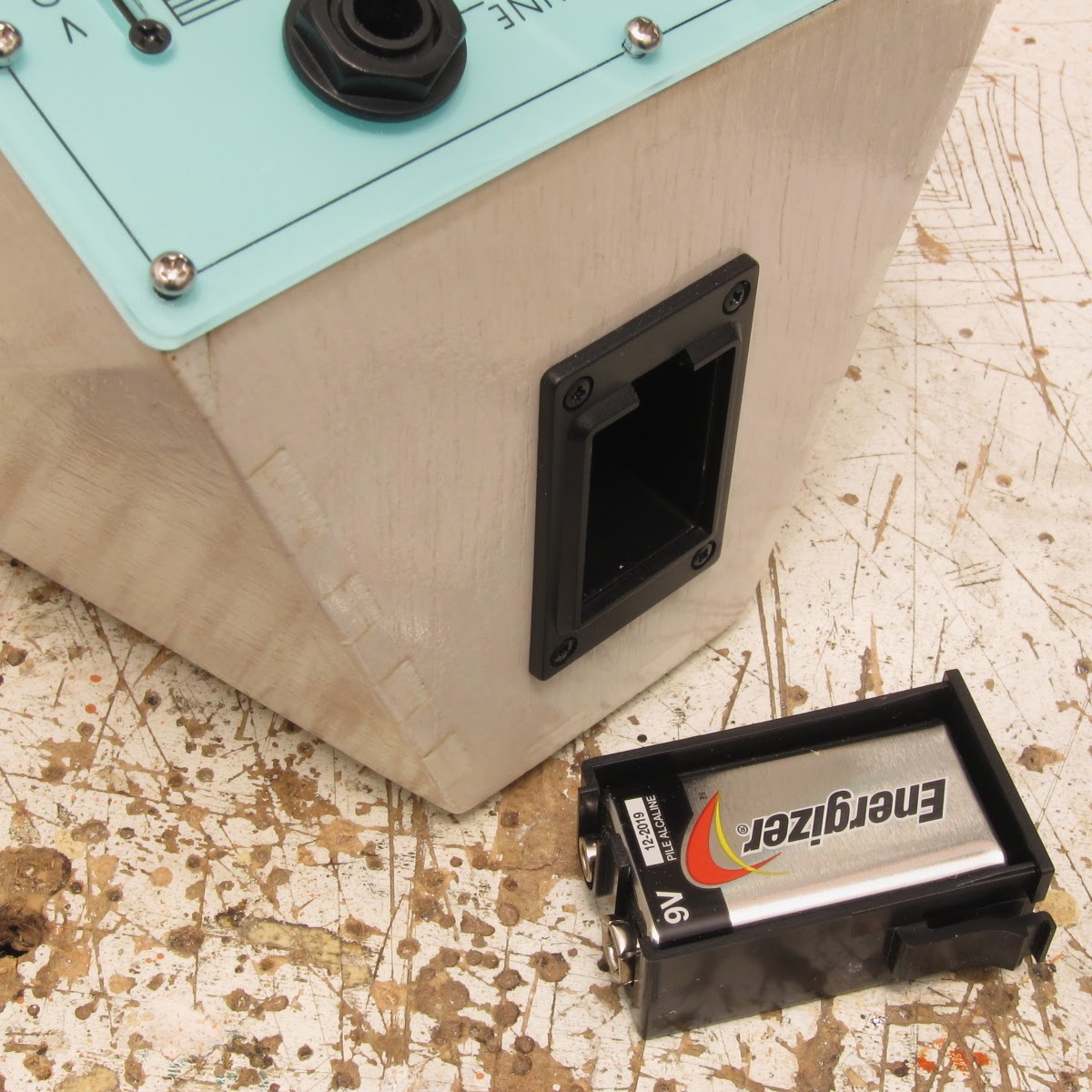 The NT03 enclosures are made from laser-cut plywood and laser-cut acrylic faceplates. everything is made inhouse(in my house) from scratch. when i finished the first NT03, i had originally intended on painting them all primary or secondary 'candy' colors. hence the yellow one. after some time away from the project though, i thought it might be nice to come up with some colors of my own. i ended up mixing all of the colors for the final five by eye. some are a clean wash, and some ended up with some inconsistencies. namely the olive green one that has my big fat finger print in it. i suppose i could fix it or change the color, but despite the imperfection, it still looks really clean. if no one buys it, i'll just have to keep this one for myself.