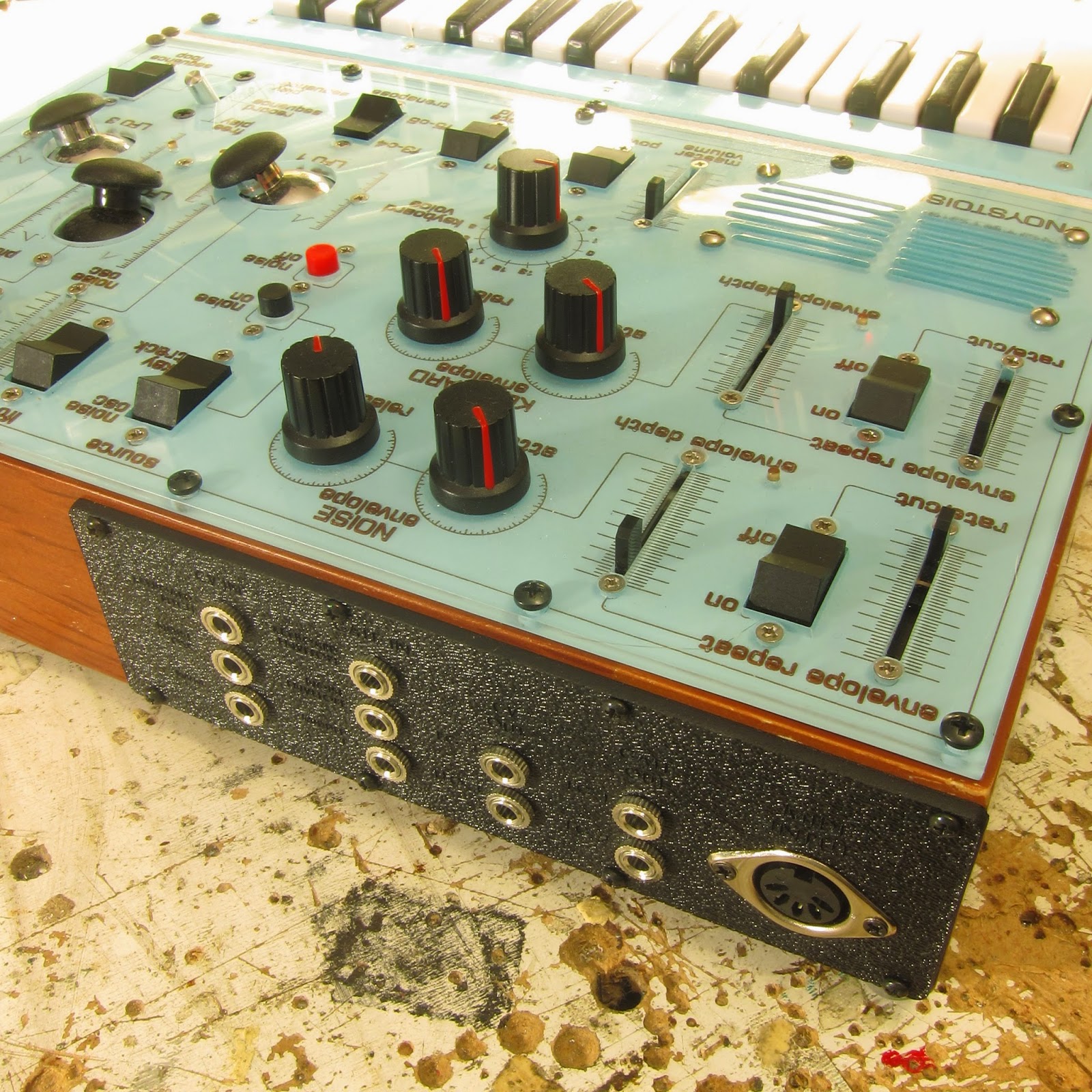 Well, my Noise Synth has finally found a home. the buyer contacted me to buy the last NT02 from the series. however, the faceplate of the NT02 had suffered from a significant amount of "crazing" caused by the metallic silver paint. the paint must have had some kind of quick-drying solvent in it. it caused thousands of tiny "feathery" cracks around the cut holes in the faceplate. the cracks have no affect on the structural integrity of the acrylic faceplate, so i just went with it and dropped the price of the NT02 by $20. over time though, the imperfection really started to bother me, so i made plans to cut a new faceplate for it since no one had inquired about it yet, but before i could start, someone did contact me for it. i explained the situation and he agreed to pay a little more for a new faceplate, and more still for CV inputs. 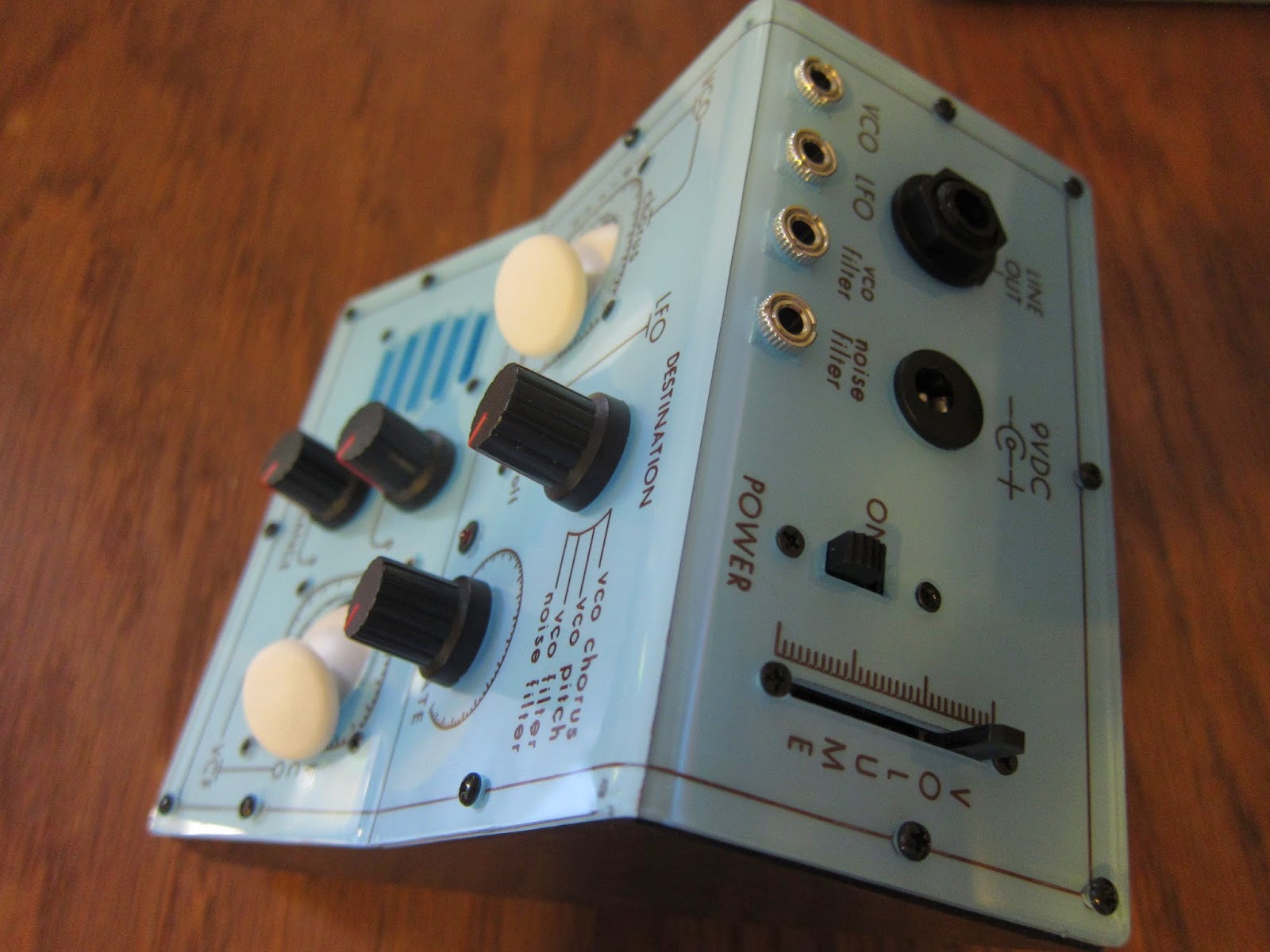 he told me that he would also like to buy the NOISE keyboard from me, so he wanted the two to match. works for me!!! he also wanted to pay a little extra to have me add some stuff to the NOISE synth. i added a Highly Liquid midi input to control the keys, CV inputs for keyboard pitch, noise oscillator pitch, and PWM, gate inputs for keyboard envelope, noise envelope, and middle F key, CV outputs from noise envelope and PWM LFO, and gate outputs from EG1 and EG2. it wasn't too difficult to conceive of the new mods, but upon opening the keyboard, i realized that this was one of my older projects from before when i started using my CNC to make circuit boards. everything was point-to-point on perf-board. everything was pretty clean, just hard to locate certain parts of the circuit without any reference. while i was in there, i decided to add some more circuitry "pro bono". one thing i had always been dissatisfied with in this keyboard was that the pitch range was so low. the radioshack programmable organ chip that i used could not be clocked very much higher than it's intended pitch, so there was not really much to work with. and because the main voice was being divided down to generate its 15 different timbres, some were too low to even distinguish notes. also, the pseudo-noise generator voice can be synced to the keyboard voice, but the pitch range was so low that it was hard to hear the key changes on lower notes. to remedy this, i built a simple frequency multiplier using a CD4046 PLL chip. now the voice coming from the keyboard is multiplied by 4 before being sent to the timbre divider and the noise clock input. the results are great! the timbres and noise generator are much more tonal. FAREWELL NOISE SYNTH! 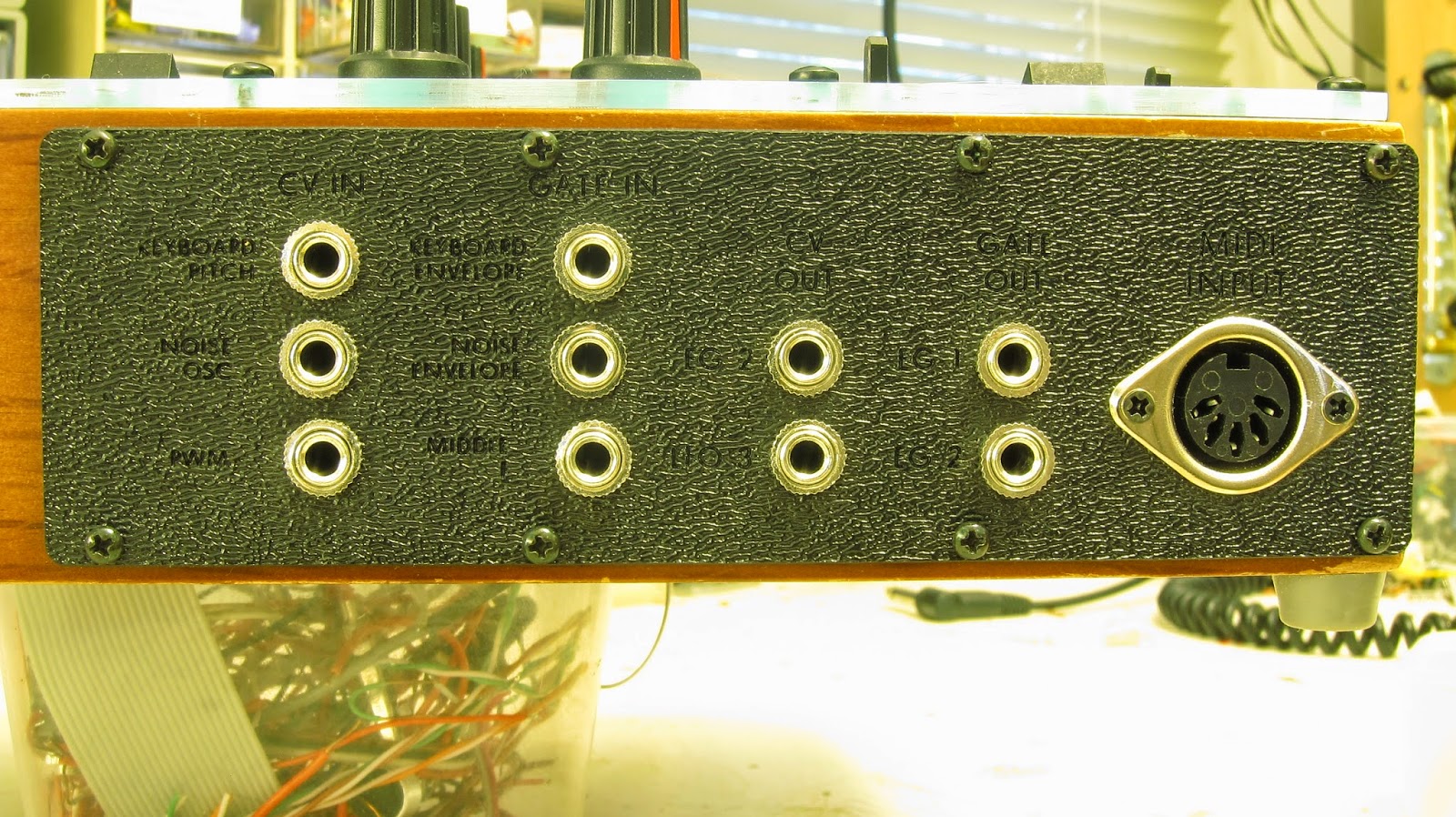 UPDATE 12-21-2013
I finally got around modifying this keyboard further. as more time had gone by, my dissatisfaction with this keyboard's LFO range grew. i decided to go back in and fix the problem. the joysticks had originally been used as variable resistors to control the frequency of the LFOs, but 10k was not enough after the joysticks were mounted to the front panel. this is because the physical range of the joystick was limited by the joystick hardware. i would estimate that each joystick lost at least 10% of its range from this. to solve the problem i used 6 vactrols, one for each axis, in parallel with 100k resistors to control the rising and falling edges of each LFO. then i wired up the joysticks as voltage dividers to drive the vactrols. they are the cheapo vactrols from electronics-goldmine, so they do have some latency, and some of them were defective, but the result was effective. now the range of the LFOs is ten times greater than they were before, so you can actually distinguish the shape, whereas before, the joystick really just acted like a FAST/FASTER control. while i was in there i thought it might spice things up if i added some soggy delay, so i threw together a pt2399 echo circuit and put it in. it definitely gives the whole keyboard more dimension. before, the sound was dry and a little harsh. now that this keyboard is whole, i feel better about selling it. it is for sale now at my FOR SALE PAGE.
CHECK OUT THE VIDEO UPDATE TOO 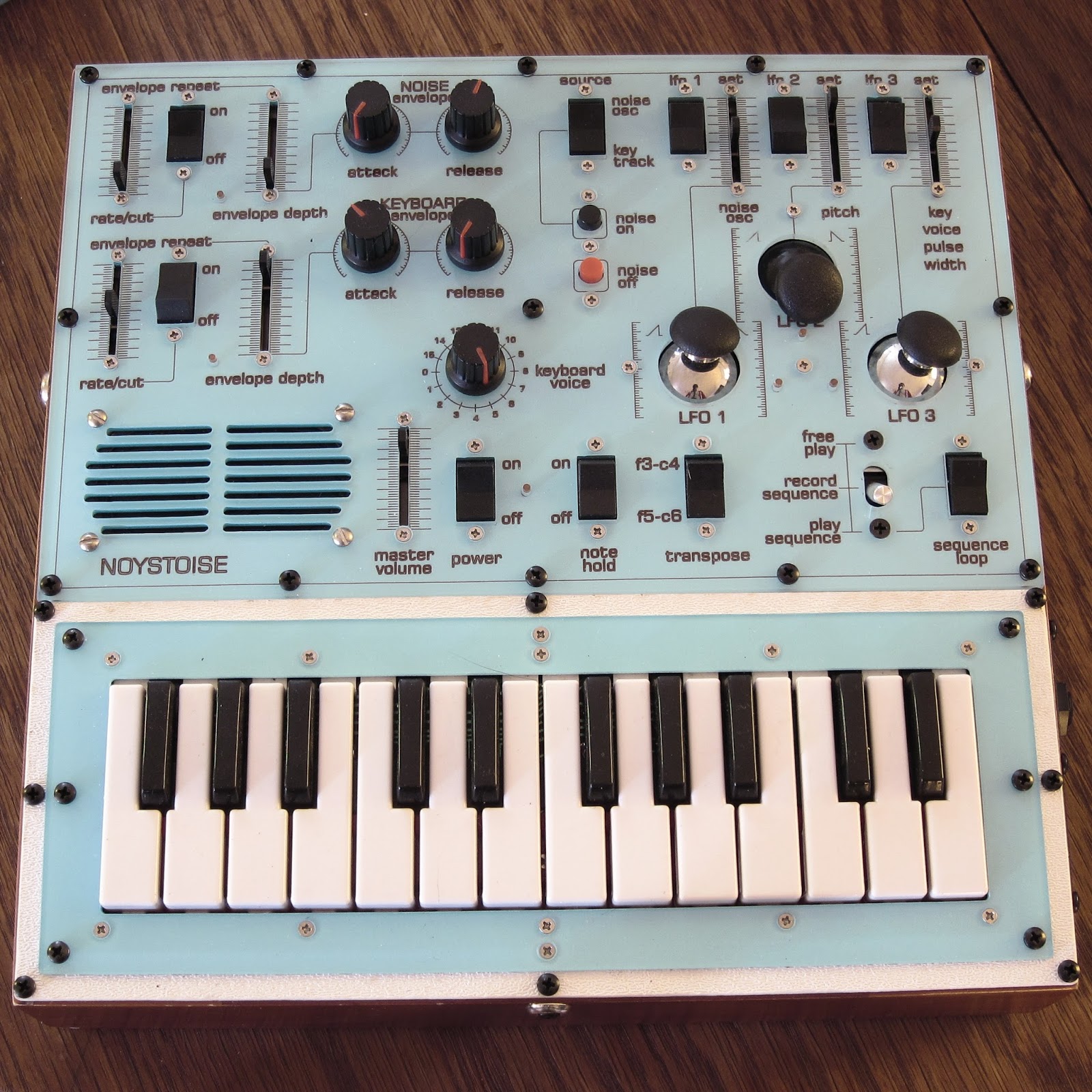 This project was based around the lesser known Radioshack Programmable Electronic Organ. they are not exactly the most satisfying of toy keyboards mainly due to the fact that the keyboard is monophonic. it does however have two voices to choose from; piano and organ. the keyboard is also equipped with record and playback modes. in record mode, up to 19 notes of variable lengths can be recorded to the internal sequencer. in playback mode, any of the white keys will reset the sequence from the beginning. if a white key is held down, the sequence will reset once the last note in the sequence has been reached.  the sequence will be saved in playback mode until it is overwritten or the keyboards' power is reset.
I usually make an effort to snatch up these toy organs when i get the chance as the inner workings offer a lot as far as modification is concerned. there is a rather nice 40-pin organ chip inside that actually offers a lot of potential. one thing that really surprised me though is that there are designated gate and trigger pins on the chip. this makes adding additional circuits such as envelope generators much easier.  one thing i was pretty disappointed with though is the range of pitch modulation this thing can achieve. at stock functionality it is pretty much clocked as high as it can go. not only does that interfere with how well the voice can be divided, but also puts a pretty low limit on how fast a recorded sequence can be played back. oh well, it is just a toy. there may be a way to bypass the internal clock too an inject a faster one somewhere on the chip, but i didn't get that far. it probably wouldn't work anyway. 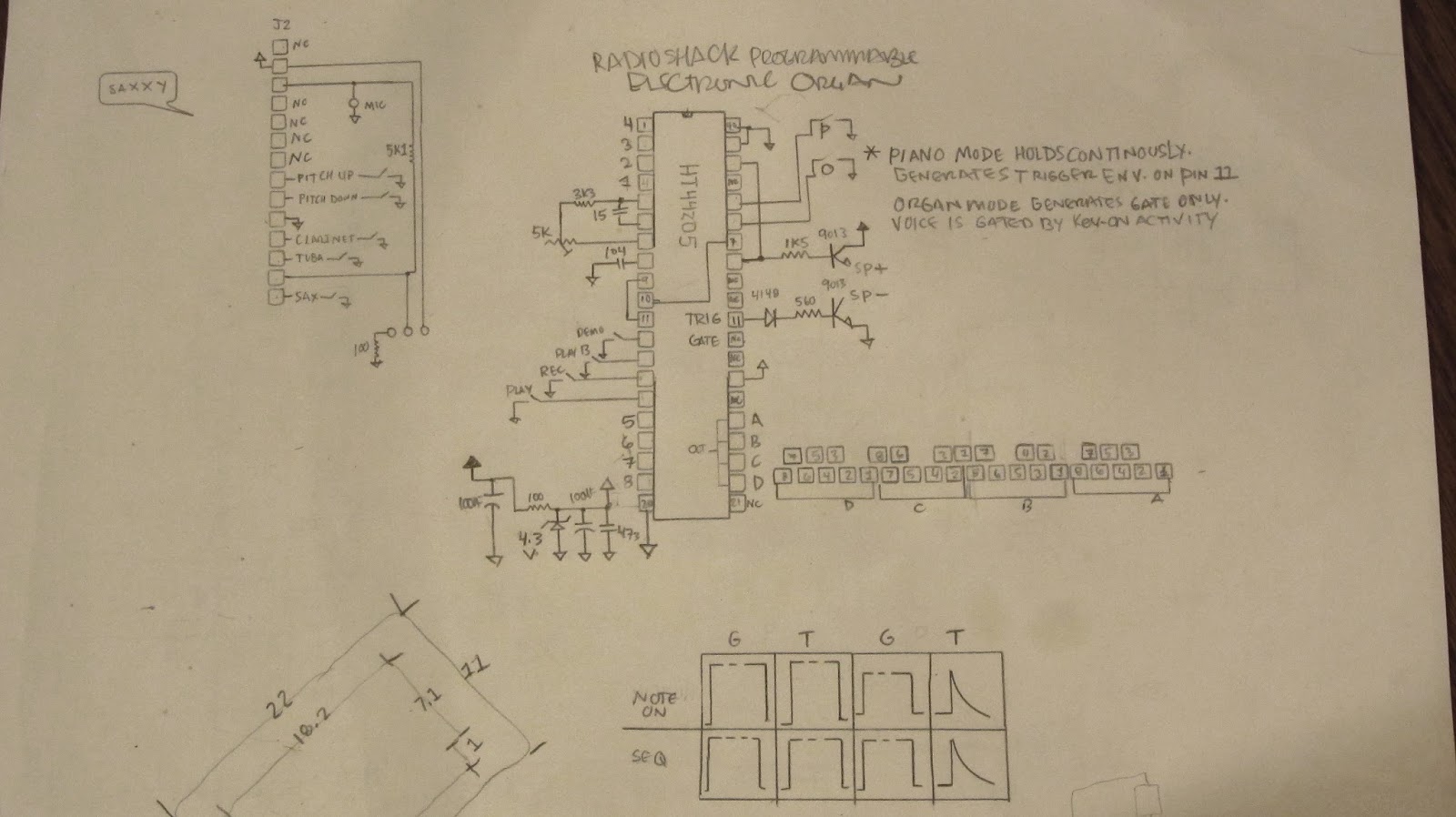 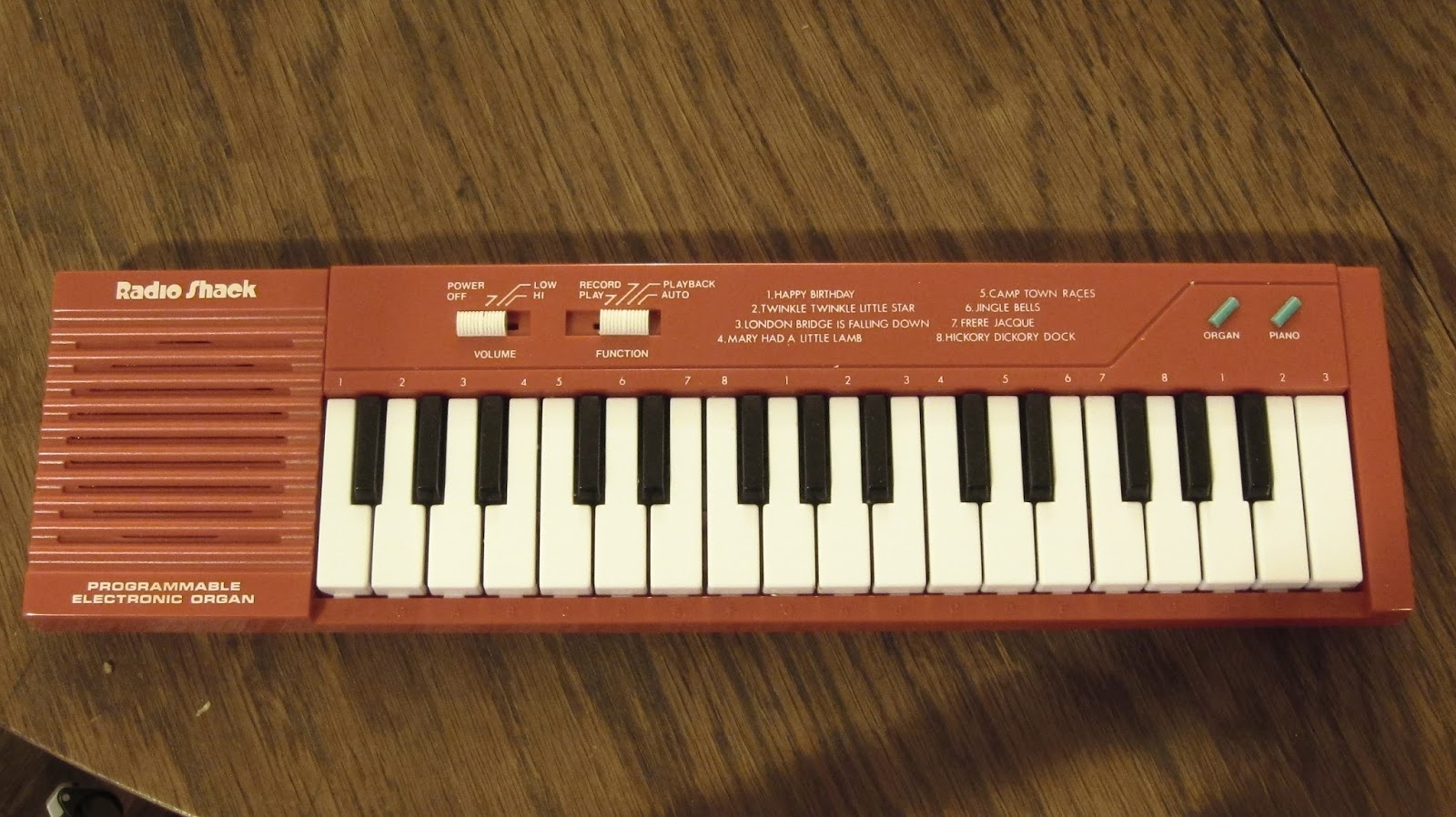 After spending a little time reverse engineering the toy and seeing what it was capable of, i started brainstorming some ideas for additional circuits i'd like to add. the monophonic voice was a pretty nice clean square wave so it was not hard at all to send it through a pulse width modulator. after that the signal would be sent to a cd4089 binary rate multiplier. i had used 4089s before as a pattern generator for a drum circuit a long time ago but i had never used them as a frequency divider before. it turned out pretty well and gave me 15 very unique timbres. i had originally planned to have four optional LFO's to modulate each of the binary inputs on the 4089 but upon testing it found that it was too gritty. maybe if the keyboard could operate at higher frequencies... oh well. after the divider stage, the signal is fed to a super basic VCF. i decided early on that i would like to be able to run this synth off of batteries so i took every opportunity in keeping the operating voltage as low as i could. hence the 5 volt VCF. i suppose i could have just used a bigger battery pack but what the hell. after the VCF stage, the signal is fed to an LM386 power amp to drive the internal speaker. the next idea was something that i have been wanting to experiment with for a while now and finally got the chance. i have had this rough schematic for a shift register noise generator circuit that i had been meaning to try out. i prototyped it up on breadboard and it seemed to fit well with the overall chip-tune sound of the keyboard voice, so i built it in. the noise generator can be clocked either by its' own oscillator or by the note of the keyboard's main voice before it hits the divider stage. the pitch of the noise generator will track the keys pretty well, but it would probably sound a lot better if the pitch of the keys were one or two octaves up. again the pitch range... the noise generator is not random. it is just a long sequence that needs a little help getting started. i had to build an initial-clear circuit to set the sequence in motion upon power-up. the sequence can then be interrupted and effectively turned off by pressing the Noise Off button. it can then be turned back on with the Noise On button. the noise generator signal is fed to another super basic VCF, and then mixed with the keyboard voice before being sent to the power amp. the two filters are modulated by two separate envelope generators. each has Attack, Release, and Depth. each envelope generator has a Repeat LFO too. when active, the rate knob sets the frequency of the Repeat LFO. while disengaged, the Rate knob acts as a cut-off level for its' respective VCF. i then thought it might be kind of nice to add some LFO's for modulating the PWM, Pitch, and Noise Pitch. each function has a switch that will change that parameter's depth knob will set the respective LFO's depth. the rate and shape of the LFOs are controlled via joystick. as a consequence of not prototyping my LFOs before building them, the frequency range is limited to the physical turning radius of the joysticks. i really wish that i had seen that coming but its really not that bad.
the keyboard section's functionality was pretty straight forward. to select the timbre from the CD4089, i used a 4-bit encoder(16 positions).  in the "0" position of the 16, the keyboard makes no sound.  i found that the two voices(piano and organ) would work better more as a note-hold on/off switch. i threw in a 3 position switch for the Play, Record, and Playback functions. i also added a switch that would loop the recorded sequence in playback mode. the toy keyboard that i was working with had sustained some severe damage at some point in its life, and the top 8 keys had to be removed. with the limited pitch range the keyboard was already restricted to, it was a shame that those notes go wasted, so i thought what the hell, i'll add a switch swapping out the lower 8 keys(f3-c4) for the missing 8(f5-c6). it makes things a little confused but the noise generator sounds much better when its tracking the keys. 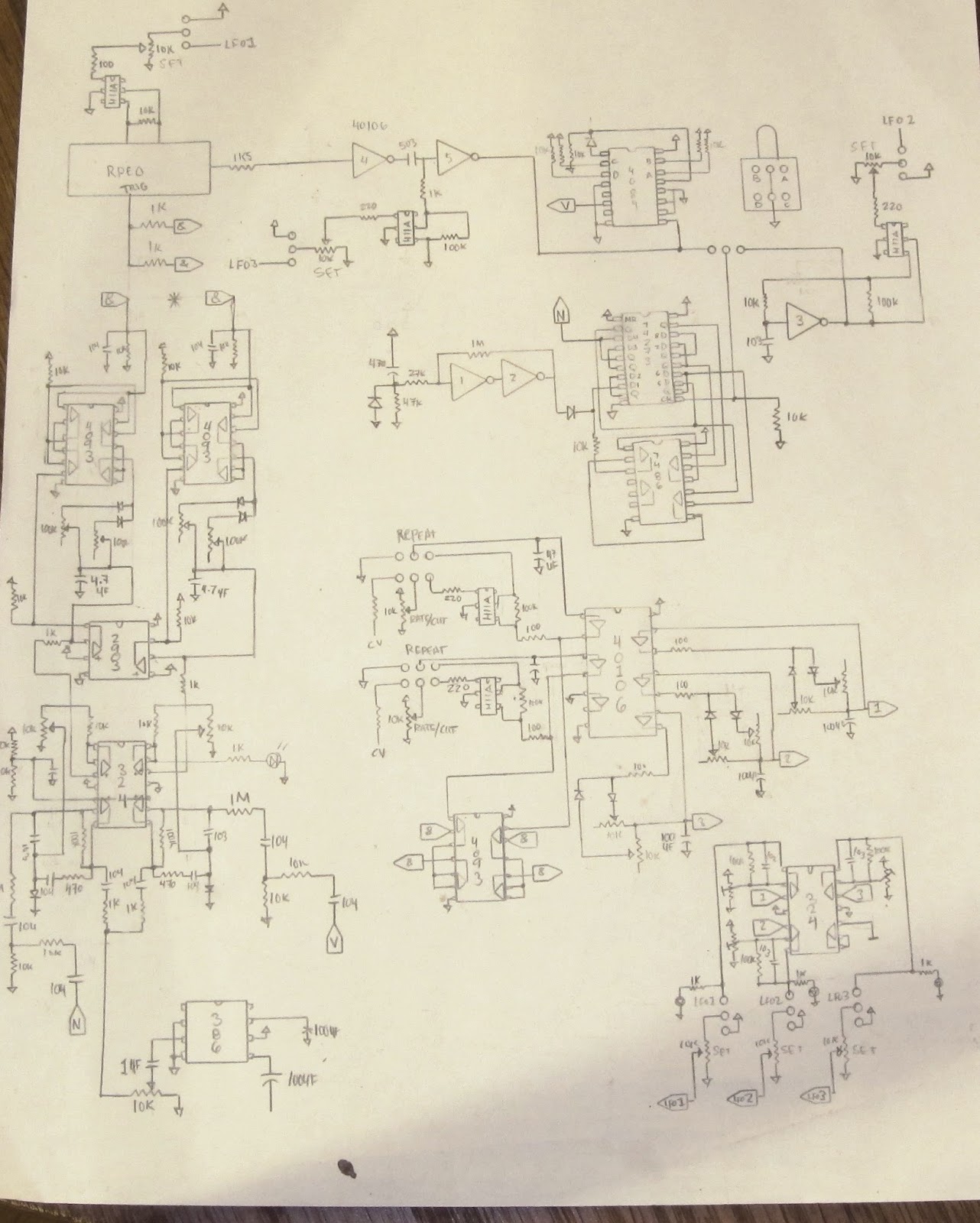 It took a couple of days to design the faceplate, but only about an hour to cut it out and paint it. i fit everything in to a beat up wood box that i found at the thrift store. it was pretty beat up when i found it so i had planned to sand and paint it. once i had seen it with all of the hardware in though, i decided it looked better with all of the scratches and chips, so i left it alone. i added a battery compartment to the back, and a pretty sophisticated little ac-adapter switch circuit, as well as a line out(for audio). not too shabby. 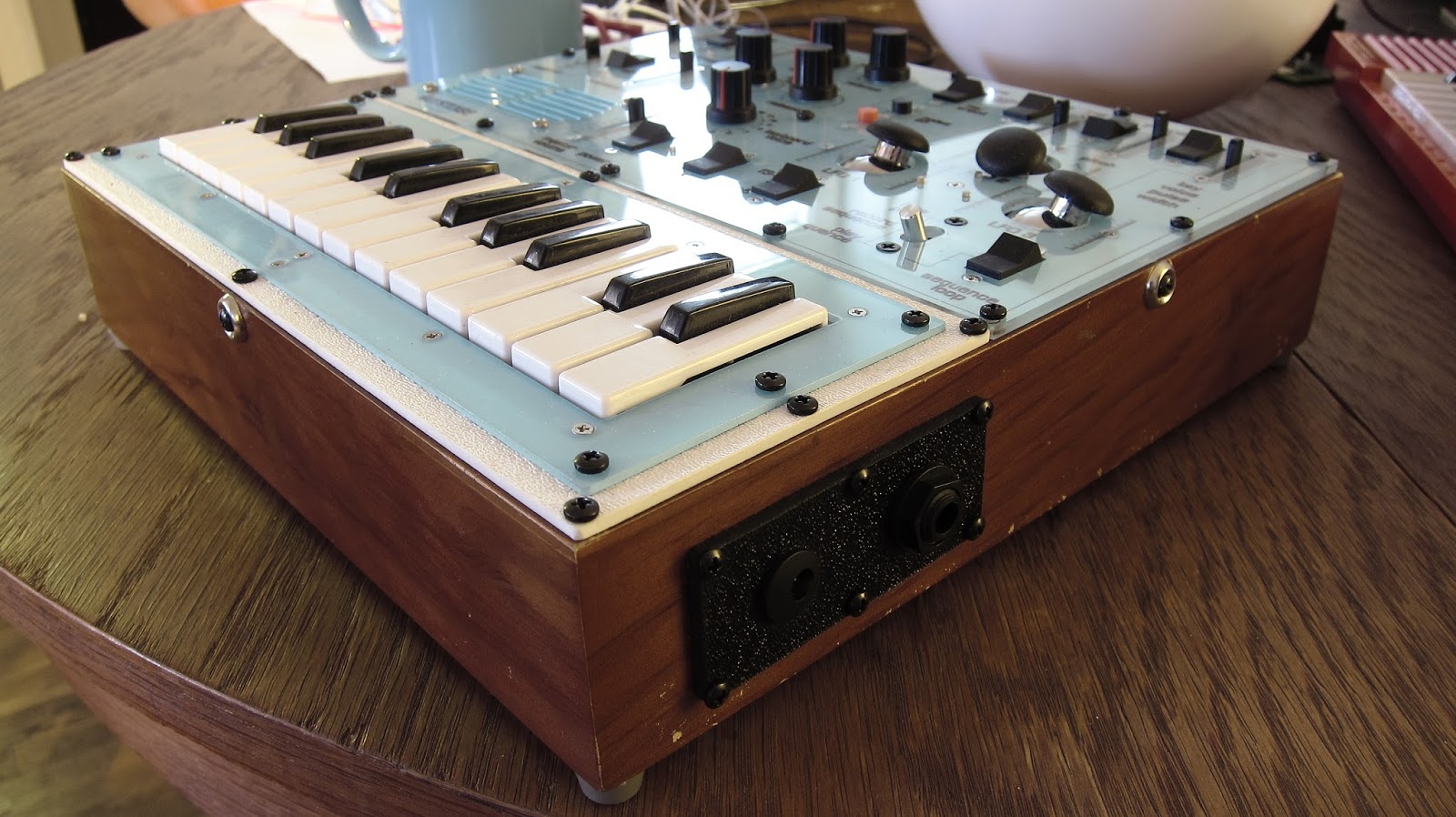 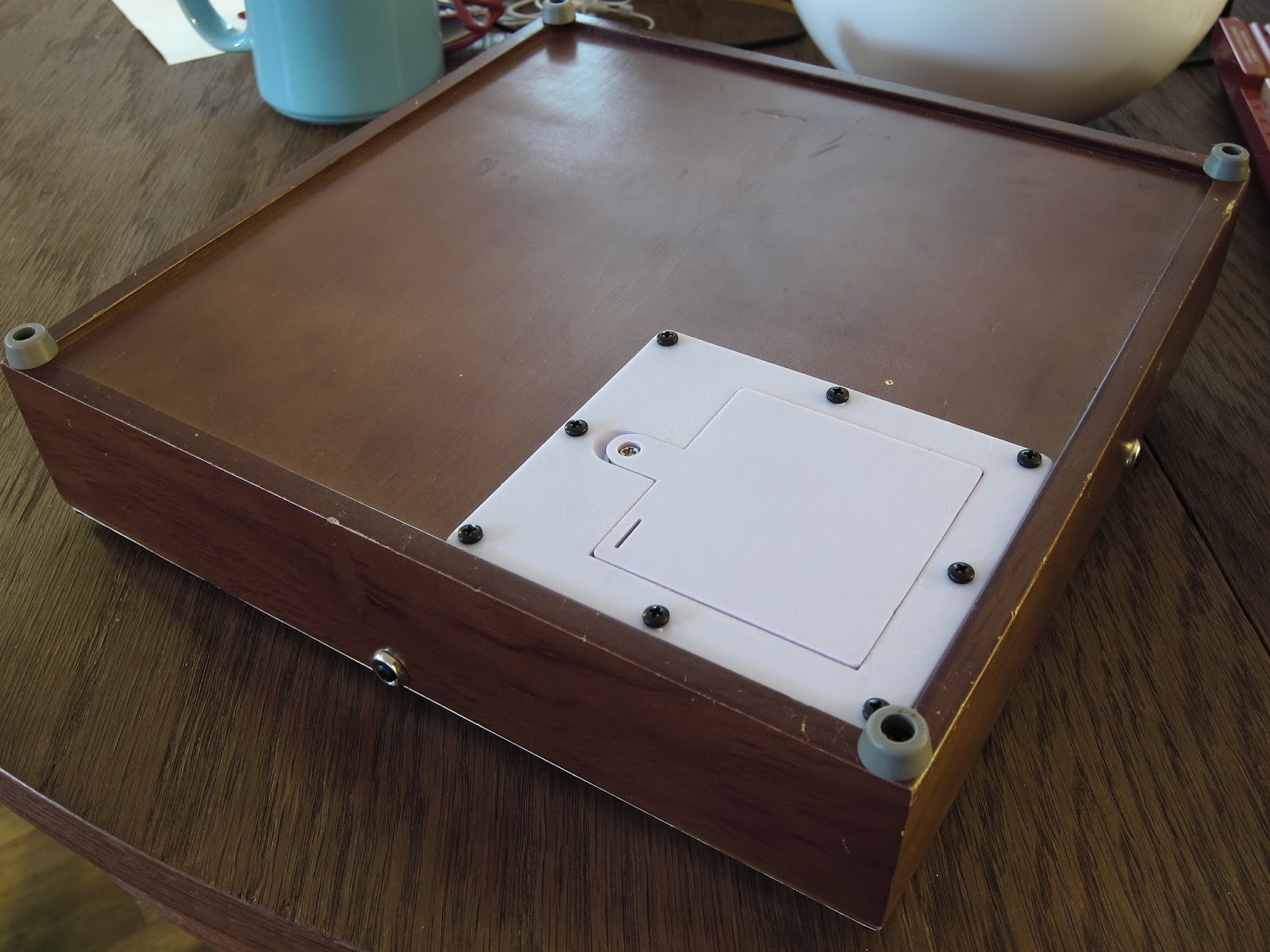 Here is a closer look at the interface 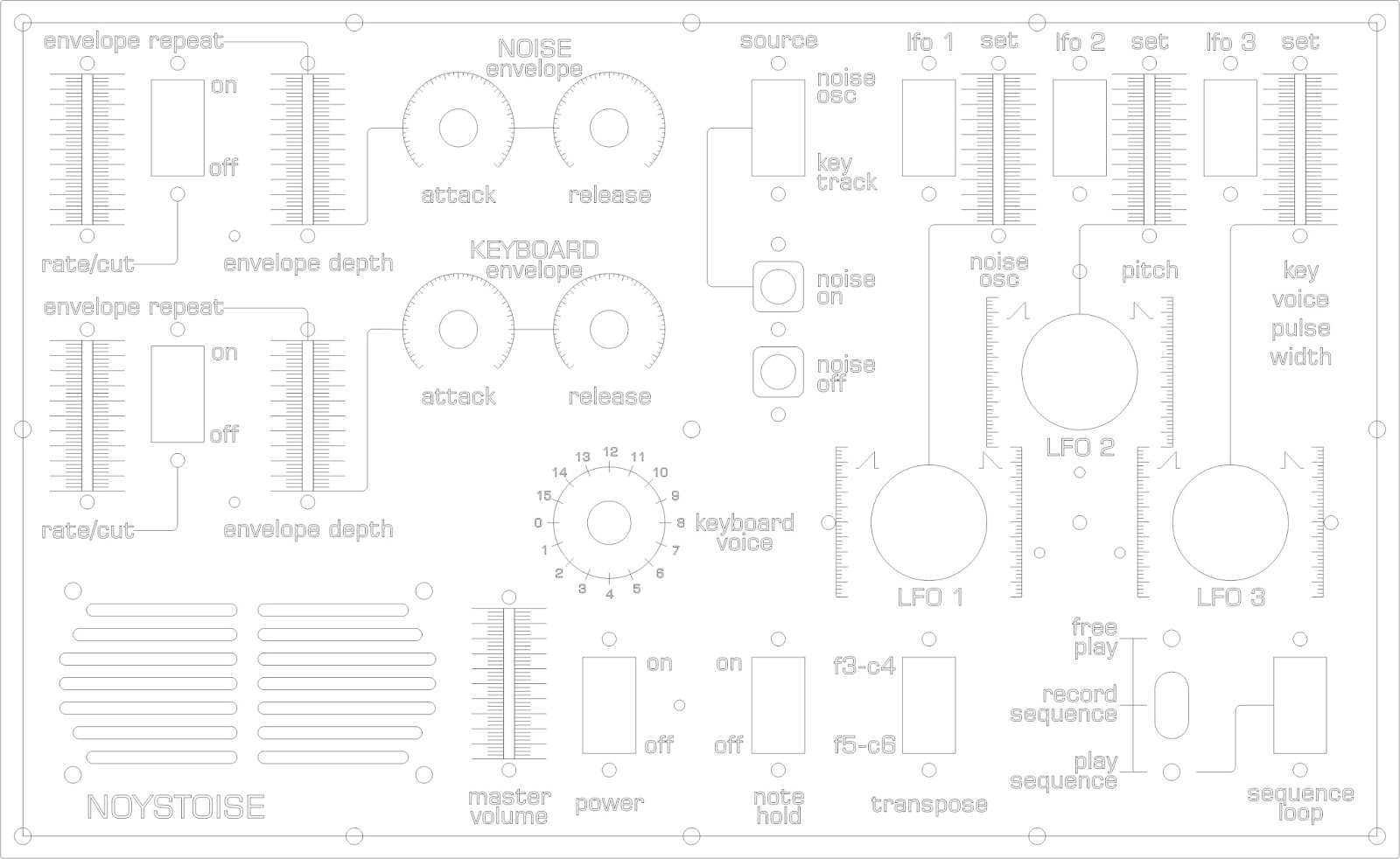