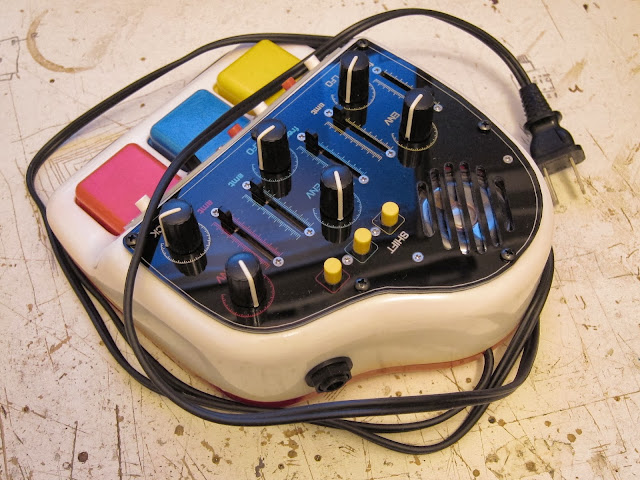 Another of what was supposed to be a quick and easy project; the "Funky Glitch Buddy". The name was taken from a song file i created some time ago that has been floating around my hard drive for at least eight years. i had never intended to finish the track, i only kept it around because the name was catchy. now i suppose i can finally delete that file.
this project began a few weeks ago and was supposed to be a quick little project. my primary motivation for this piece was to produce something quick that i could list on my NEW FOR SALE PAGE. i am doing Noystoise full time now and i need to pay the bills.
In the process of building this toy, many setbacks occurred. the biggest one being that i was never really satisfied with what the end product would be. the concept changed back and forth a few times until i had settled on the overall plan. the plan would be to use the three big keys of this little baby's keyboard to control three pattern generators that would then trigger two independent pseudo-noise generators and one simple VCO. the three keys are not actually pressure sensitive. there are Infrared emitter/receiver modules that bounce IR light off the bottom of the keys. the output of each IR module is sent to a lm3914 which acts as a sort of A/D converter. the eight outputs coming from the lm3914 are sent to a 74148 priority encoder chip. the three outputs from the 74148 are then sent to the CD4089 pattern generator chip. the pattern coming from the 4089 chip triggers the respective envelope generator. so basically, depending on how far down you push on the keys, one of eight patterns will be selected. the other eight patterns that are available on the 4089 chip can be accessed by pushing the respective "shift" button. this simply toggles the 4th input on the 4089. the two pseudo-noise generators are built from scratch using 74273 chips as shift registers. these noise generators are pretty effective and sound really good. unfortunately though, they take up a lot of space because you need an XOR chip to make them scratch, an initial-clear circuit to get them started, and oscillators to clock them. not to mention the two VCAs, two envelope generators, and inverting buffers for the envelope generators. in all something like 22 chips went into this project, so it was in my best interest to learn to use my newly acquired CNC to cut out some nice little space saving circuit boards. it took some time to get my head around it but im glad i did. i don't think i'll ever use perf-board again! not for circuits anyway. the one thing that i was the most satisfied with was having a working circuit upon power up. so nice.
one thing that was sort of unique about this project is that at no time did i ever just sit down and draw out the entire schematic. it was supposed to be such a quick project that i never gave it a second thought. in retrospect though, i should have just taken a half hour to draw everything up. it would have probably saved me a lot of time shuffling through old notes and datasheets. one of the major things that i overlooked was the power supply... throughout the entire build process,  i had only powered any of the circuits with my trusted regulated 5volt ac adapter. i guess i just assumed that this thing would have no problem running off of a 9 volt battery once it was all built... i was wrong.the circuits ended up drawing so much current that i was unable to even build an adequate 5volt regulator for the ac adapter input. they kept overheating... in the end i sacrificed my trusted 5volt adapter, building it into the keyboard. i really would have liked to have this thing run off batteries but the circuit is just too hungry. to make things even more frustrating, the original faceplate that i had cut, painted and installed decided to crack when i put too much pressure on it while pressing on a stubborn knob. i figured that it must have something to do with the thickness of the acrylic so i quickly cut a new faceplate with a thicker piece of acrylic. it came out perfect so i painted it and let it dry for a few hours. i came back to it later and found that there were dozens of little cracks all around the freshly cut edges. upon doing a little research online, i found that it is a common problem when applying solvents to acrylic. it is called "crazing". there are some ways to keep it from happening but my solution is to just not even bother using solvent based paint anymore. instead i used acrylic airbrush paint. i realized that i probably could not match the original grey color of the original faceplate and the smaller undamaged faceplate still on the keyboard. instead i decided to paint the third and final faceplate black. it came out way nicer than i had expected. i added a 1/4 inch output jack and quickly noticed that there was substantial crosstalk from the noise generators' oscillators. i was able tame it a bit by filtering the power amplifier input with a single 100nf capacitor. however now the master volume control acts more like a filter. i like it though. there is still a considerable amount of crosstalk coming from the oscillators. i assume it is because everything is all smashed so close together inside. i came to the conclusion that it probably wasn't worth trying to fix since it is only really noticeable at the highest volume setting, which is quite loud. when i plugged it in to my sound-card to record the demo video, i didn't notice the sound at all. i'm happy about that.but after all, it is a noise-maker. 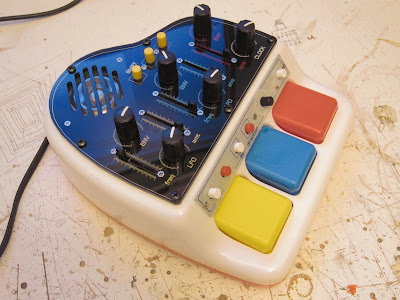 Here are some gut-shots. i think there were 5 circuit boards in total including the little VCO circuit seen with the big green capacitor. it took me a while to decide what the third pattern generator would trigger. in the interest of time and space, i used the two transistor oscillator from a cheap toy organ that i had lying around. it worked out well because the envelope modulates the pitch and volume of the oscillator simultaneously. i had originally wanted to put a sequencer in but it was not doable. a cheap sample was my next idea but the sound quality was just to hard to work with. 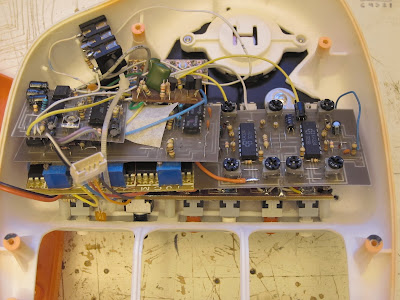 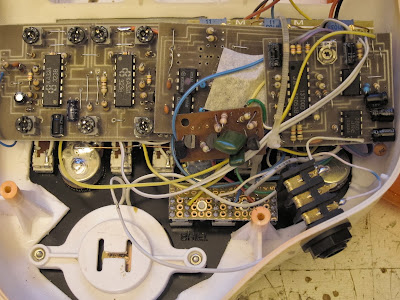 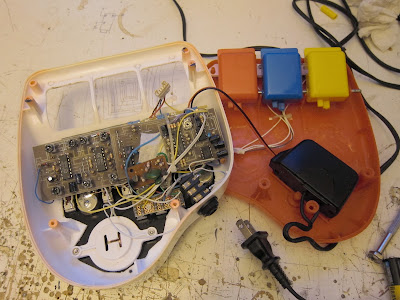 Here is a shot of the IR proximity sensors. they basically work the same as a photocell would except they only respond to IR light. oh yeah, and they are photo-transistors so they don't suffer the capacitive issues that CDS cells usually do. if they do, its not noticeable. 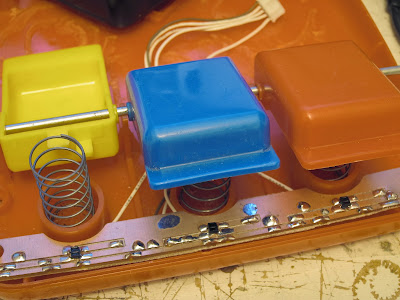 Check out the video too.


Also, check out my FOR SALE PAGE
this toy and many others are for sale right now!
thank you for your support