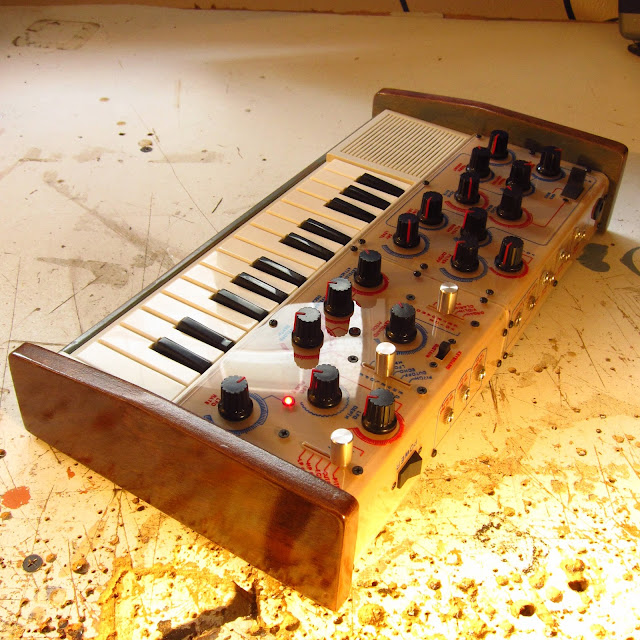 This project was a commission for an overseas musician who i have been in touch with for a while. we had talked back and forth for a year or two about having something made, but had trouble coordinating our availability. we were finally able to get a project rolling after all that time though, and ironically enough, the guy happened to be in my neck of the world when the keyboard was finished, so he came and picked it up in person! it is very rare that i get to meet my customers personally. especially since most of them are overseas. it was very encouraging. 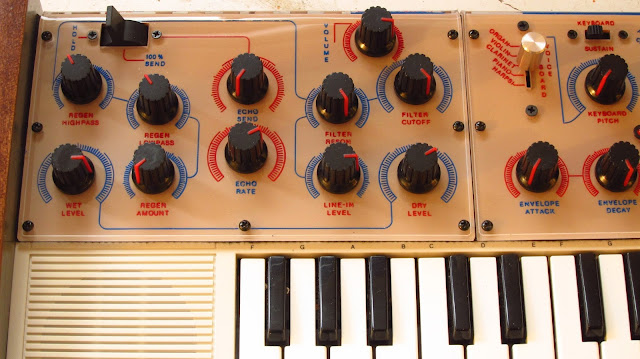 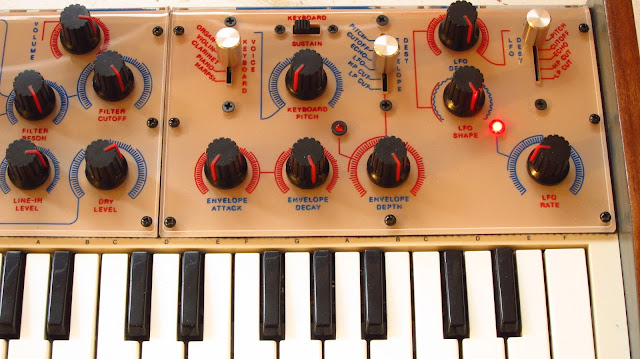 The synth is based off of a Yamaha HS200 that the musician had owned since he was a kid. the keyboard is a regular piece of his performance rig, so the finished product needed to stay compact. i had never had the chance to play an HS200 before it was shipped to me. the keyboard is actually pretty powerful for its size. it has 5 timbres, 4-note polyphony, and sustain. the keyboard had some issues, as most toys of this age usually do, but after a good tare-down and cleaning, the keyboard had a lot of potential. one interesting thing about this keyboard was the auto-power-off function. it was actually a separate dedicated IC made by Yamaha. never seen that before. needless to say, i took it out of the circuit. 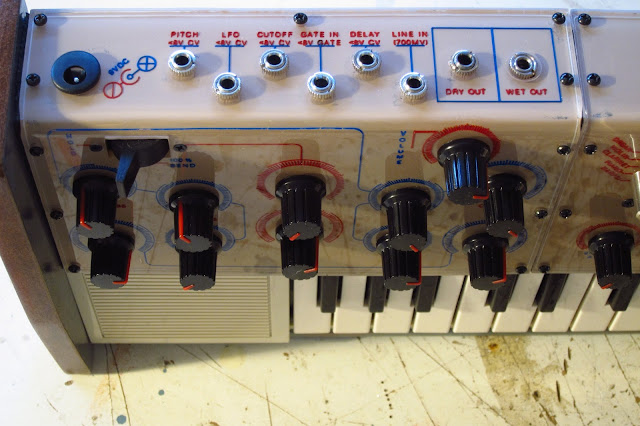 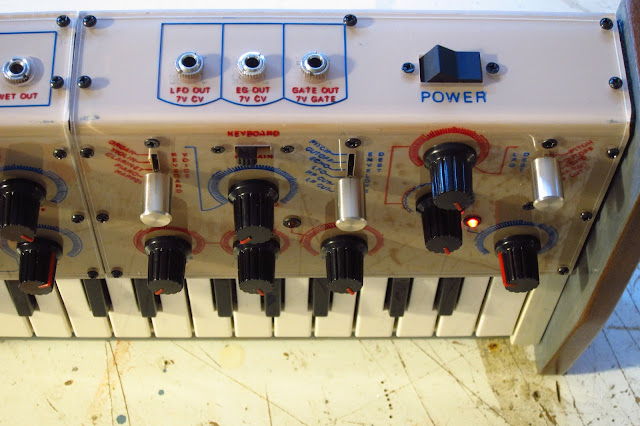 The customer and i went back and forth on the signal path for a while. it was pretty easy to come up with because he knew exactly what he wanted, and after a little learning on my part, i was able to give him all those things. one particular aspect of this project that required some learning was adding a decent PT2399 delay to this circuit. the PT2399 IC is a fun little chip to use, but the fidelity can be trouble sometimes. in this case, the customer wanted to have separate HP and LP filters for the echo signal. in order to add filters with any amount of flexibility to the delay, i would have to "widen" the range of the PT2399's input and output filters, which would introduce a lot of noise to the chip. i had also found that the HS200 signal was substantially hotter when more than one note was held, so i thought i would try my hand at companders. i had read about companders before, but never really understood what i could use them for until i saw a schematic for the "PT80" delay. i ordered some up thinking that it would solve all of my noise problems, but after a week or two of bread-boarding different configurations, it seemed that the companders were just adding to the problem. in the end i was able to reduce the noise as much without the companders as i was able to with them. it was a great learning experience though... 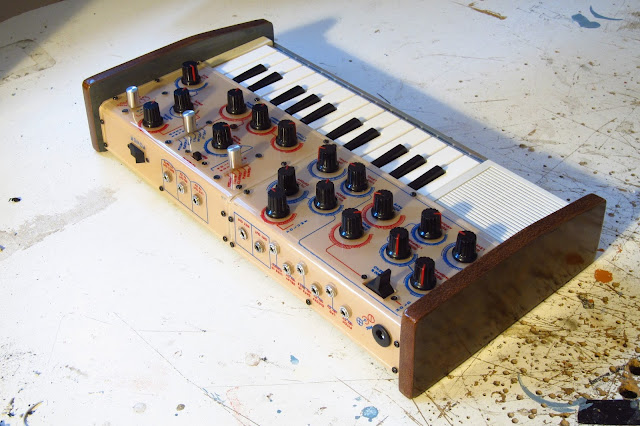 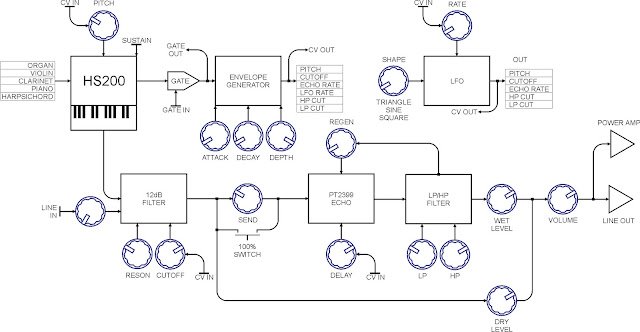 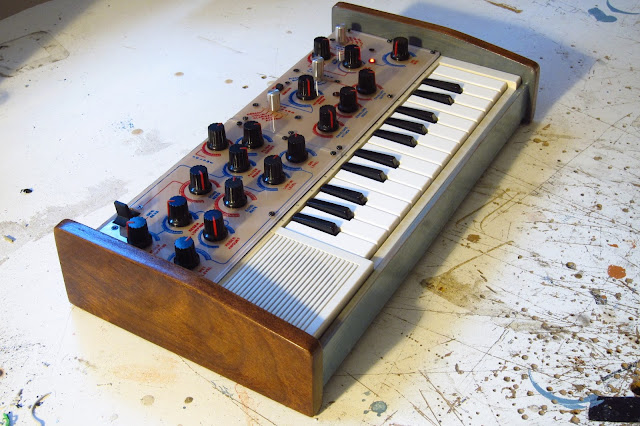 The signal path is pretty straight forward. the HS200 voice signal is sent to a 12db lowpass filter. the filter has resonance control, and the cutoff can be modulated manually, by the envelope generator, or the LFO. there is also a CV input for the filter cutoff. there is a line in jack to the filter, as well as a "dry" line out for the HS200 signal that takes the HS200 out of the filter mix when used. the filtered signal is then sent to the PT2399 circuit via "send" level knob or through the "100%" switch. the 100% switch is a three-way rocker switch. in the center position it is off. in both outer directions it is on, but one direction is momentary, and the other latches. the PT2399 delay time can be modulated manually, by the envelope generator, or by the LFO. there is also a CV input for delay time. the delayed signal is then sent to  6db highpass, and 6db lowpass filters. the filters can be independently modulated manually, by envelope, or by LFO. once the echo signal is filtered, it can be sent back to the delay input via the regen(eration) knob. the "wet" signal is mixed with the "dry" signal from the 12db filter via their respective level knobs before being sent to the master volume knob, and finally the power amp that drives the internal speaker and the line out. 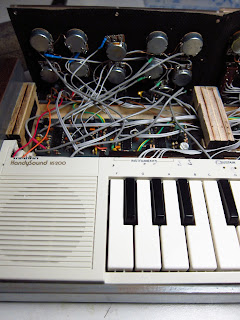 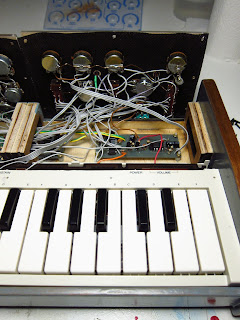 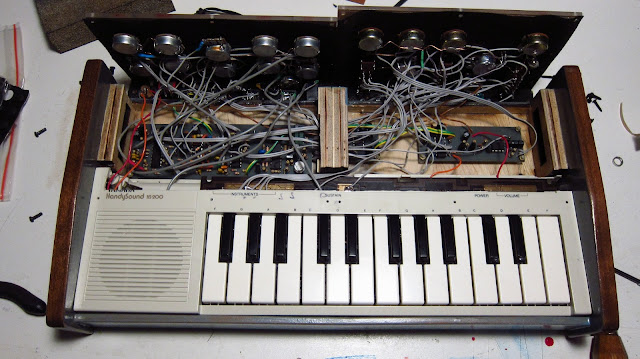 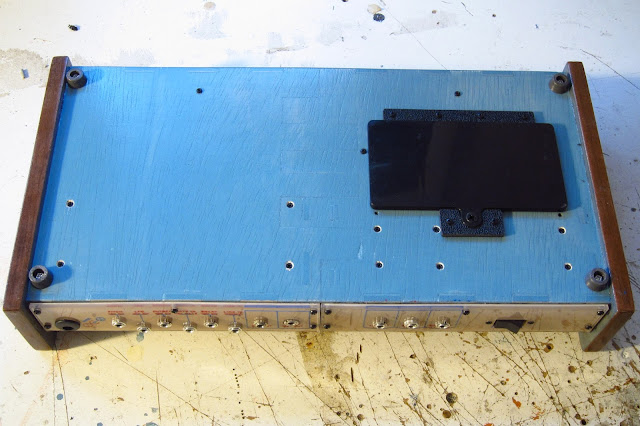 the envelope generator is your basic attack-release generator with a depth control knob. the EG is triggered by keyboard data messages that i buffered into a single key-on gate. the high F key does not trigger the EG though. this is because the data pin for the high F is shared by the timbre select switch, so it sends continuous data messages to the gate circuit. i ran in to the same problem with some other keyboards i have modded in the past. small price to pay for the key-on EG gate ability though. the gate can also be sent out to other devices with the gate out jack. there is also a gate input jack so the EG can be gated externally. the EG also has a CV output jack that can be used to modulate external devices or to modulate other local parameters externally as well as internally. this gives the keyboard a lot more flexibility since the internal signal can only be set to one parameter at a time. the EG has a 6-position slide switch to send the EG signal to either the keyboard pitch, 12db filter cutoff, echo rate, LFO rate, echo HP filter, or echo LP filter. the depth control knob of the envelope generator only controls the internal level of the EG. the EG CV out is always at full. 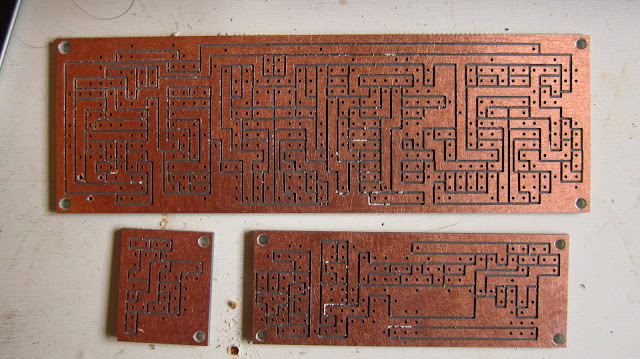 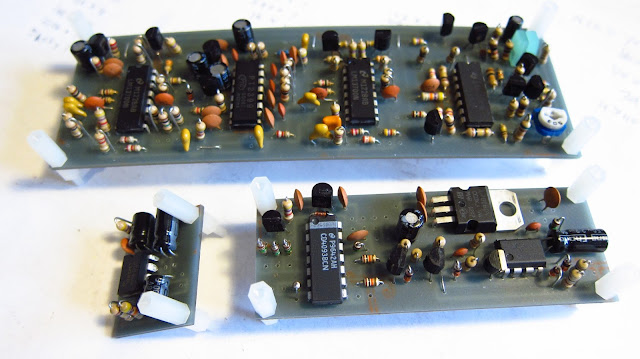 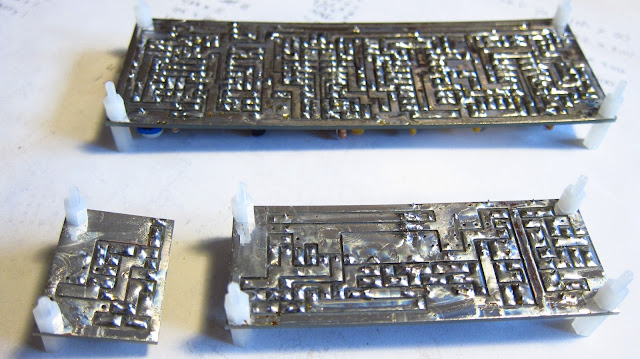 The LFO is pretty cool. it is the same dual op-amp triangle wave VCO i use a lot, however, this time i added a triangle-to-sine wave-shaper after. the wave-shaper can actually be swept from triangle, to sine, to square-wave gradually. this is a great circuit to have in the toolbox. more fun to play with than a three position switch. might have been cool to add a CV input to control the wave-shape. maybe next time. the frequncy of the LFO can be controlled manually, by the EG, or by the external CV input to the LFO. the LFO has a depth control knob that controls the level to the internal parameter it is set to. the LFO has a CV output, but like the EG CV output, the signal is output at full, and can not be controlled with the depth knob.  the LFO has a 5-position slide switch that can be set to modulate either the HS200 pitch, 12db filter cutoff, echo rate, echo HP filter, or echo LP filter. 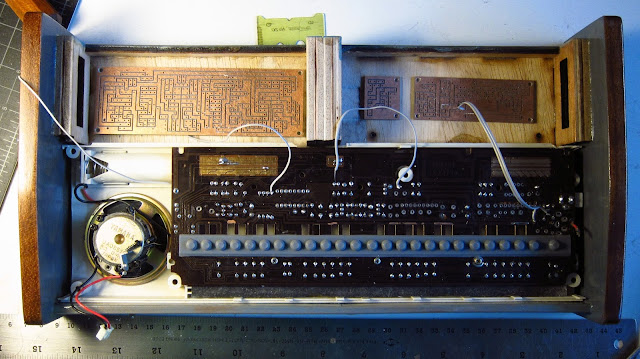 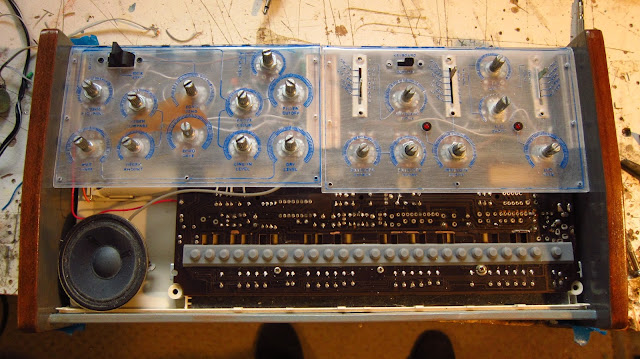 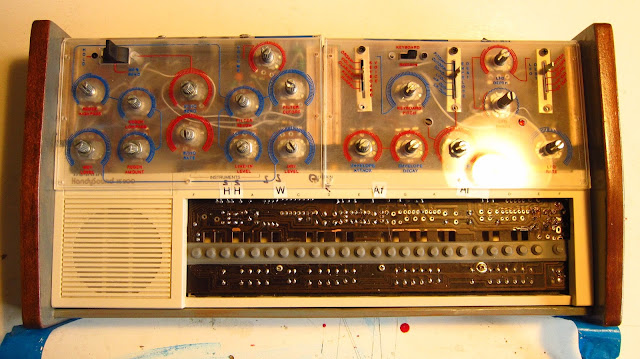 The HS200 itself has a pitch control circuit that can be modulated manually, by the LFO, by the EG, or by the CV input jack. the range is pretty limited but enough to get some great warping sounds. the keyboard also has a 5-position switch to select the timbre, as well as a single on/off switch that engages the sustain mode. 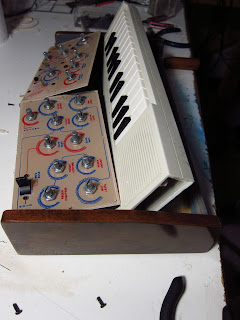 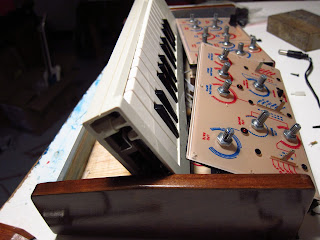 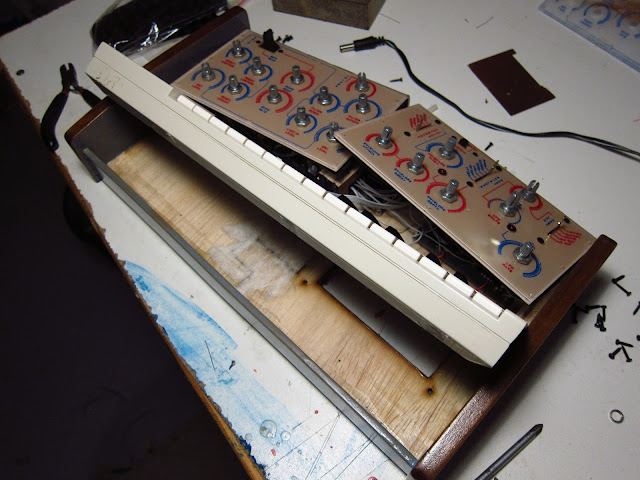 The enclosure of this keyboard was pretty straight forward to design and build, but fitting everything into it was a real feat. all of the hardware, wiring, and circuit boards are built so close together, there was really not a whole lot of flexibility when it came to designing the interface. it is tight in there! i think it came out pretty nice though. i am just glad i didn't have to arrange all of the hardware in a more grid-like fashion. i hate that. the only thing that bothered me about the faceplates in the end was the engraving job. unfortunately my laser cutter is really starting to show its age... it is really time for me to buy a new tube, i think. it still does OK at cutting, although it takes a couple passes now, but engraving is a different story. the pulses are really starting to show in the lettering and graphics when looking at them from the reverse side. the customer didn't seem to mind though, so maybe i am overthinking it. either way, i should probably bite the bullet and buy a new tube. three and a half years is a pretty good run for something that was only supposed to last one.
:)