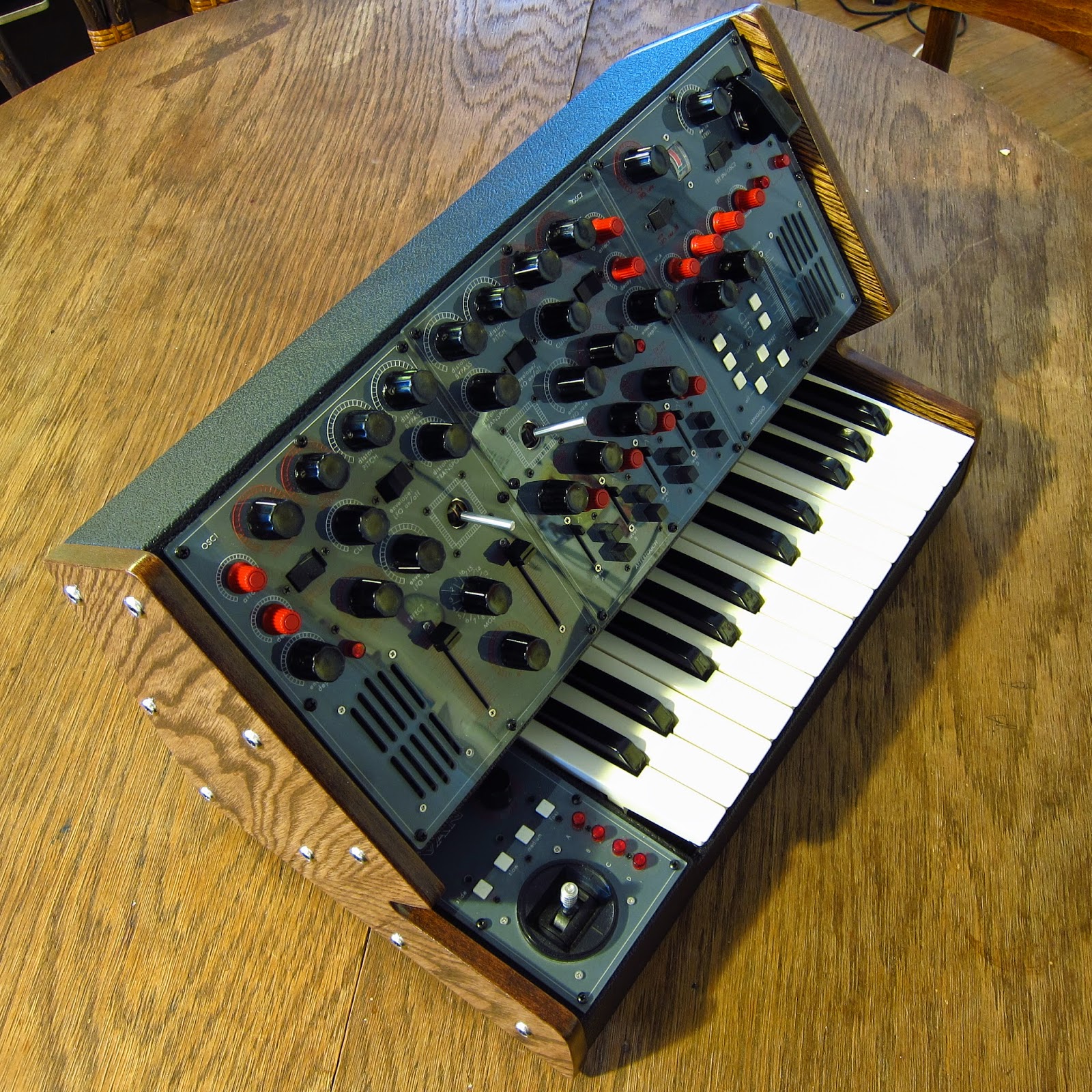 This commission started near the beginning of January of 2014. it took approximately three months to design and build. it was only supposed to take two months, but was realistically impossible for a project of this scale. in the past, projects of this caliber have taken between six and twelve months to complete, so i guess i don't really have much to complain about. i have been playing catch-up ever since though. i haven't had much time to post the details on it until now. i will have to make this one short.

The criteria for this synth was based around a few key aspects; dark, warm, heavy, deep, and Russian. with those themes in mind, i began designing the enclosure first and foremost. once the buyer agreed on the final design, i got to work converting the drawing into three dimensional parts that could be laser-cut, then assembled. 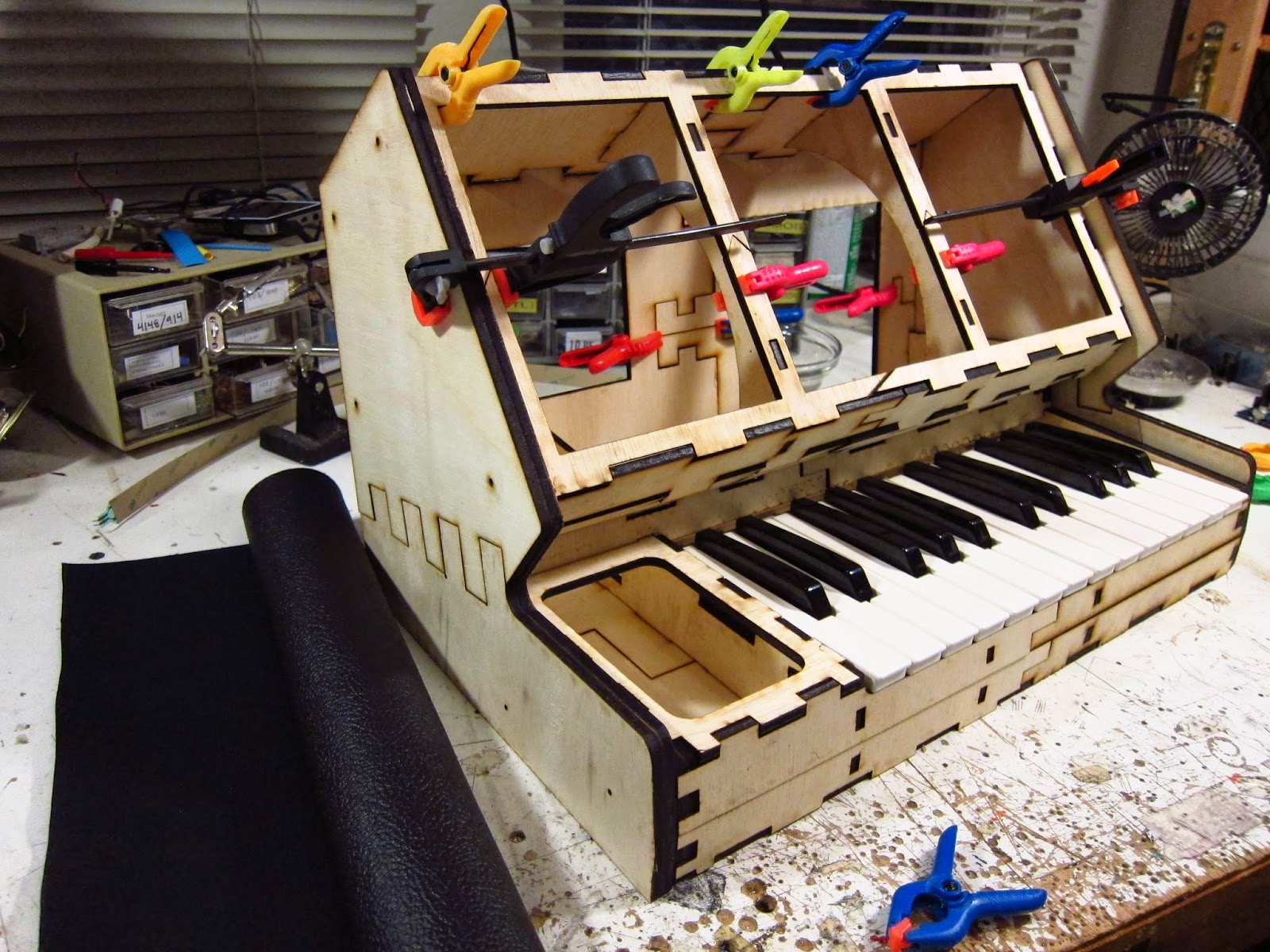 Once the enclosure was cut, assembled, and dry, it was time to give it tolex. the tolex was a bit tricky this time around. i had run out of my preferred brand of contact cement, and had to settle for some really nasty industrial grade stuff. the industrial stuff is great if you need to laminate 100 square feet of linoleum, but for my needs the non-flammable DAP is the way to go.

While waiting between assembly processes, i began designing the circuits for the synth. the synth would be based around Kevin Godwin's PICsynth V4 chip. the chip is a four octave mono-synth with two oscillators that can be detuned. it has three types of portamento and an 8-step arpeggio with three modes and variable speeds. the PICsynth really takes all the BS out of building or modding a keyboard. it is straight forward and works well, so it was an easy choice over reverse engineering a toy organ to get similar results.

Most of the the things i have built have a lot of the characteristics you might find on more traditional synths, so i always make an effort to emphasize unusual characteristics that are not as common. for this synth i wanted to bring in after-touch. after-touch basically means that the keys will be pressure sensitive. the harder you press, the deeper the modulation. the modulation signal can then be shaped and sent to control any number of the synth's parameters.  i had built a pretty excellent after-touch system on the yamaha PS-3 build, and i wanted to go even further with this one. 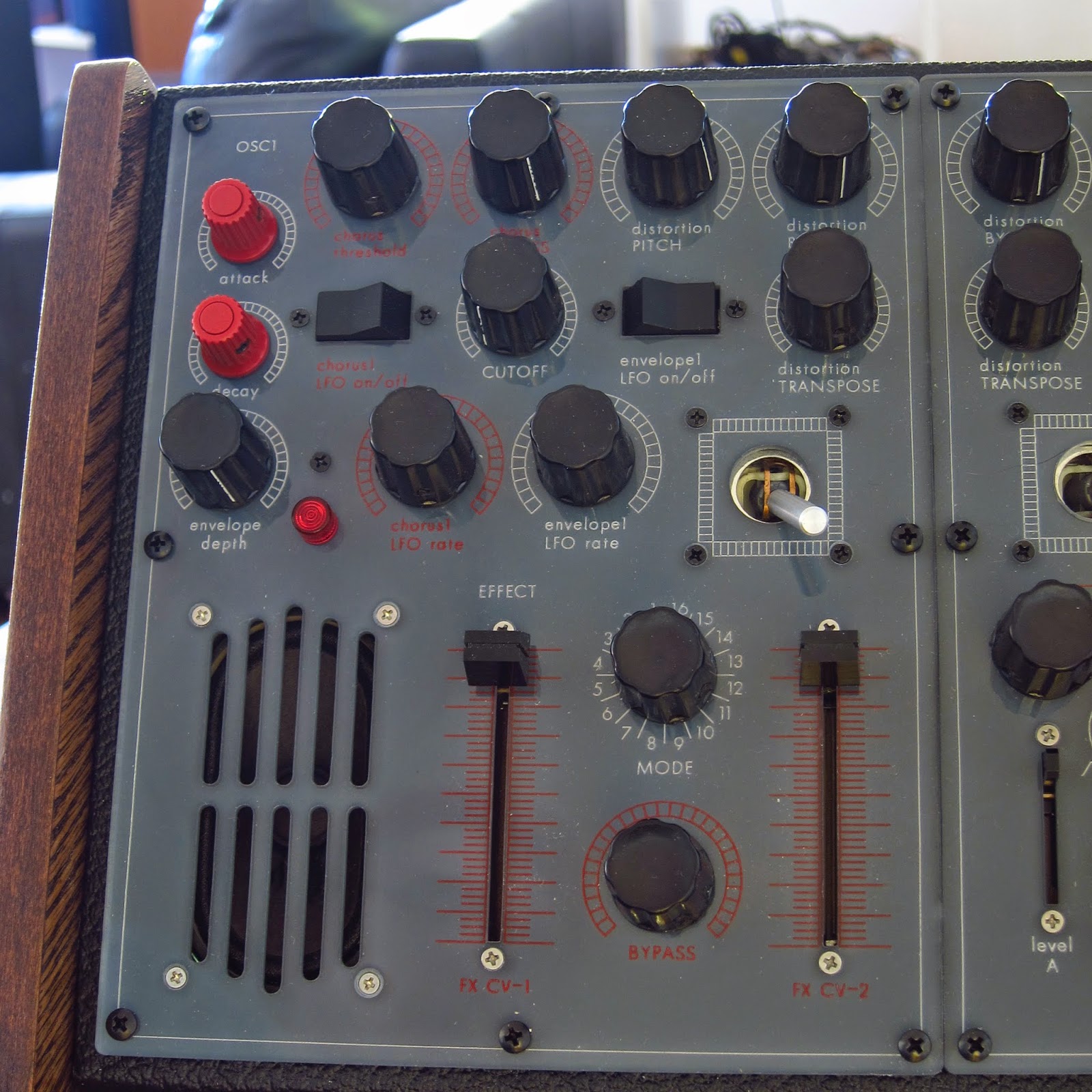 once the keyboard and after-touch sensor were tested and working, i began designing the signal path for the two square-wave oscillators coming from the PICsynth chip. i created two identical signal chains that would meet up at the end of their respective modulation stages to then be sent to some more modulation. each square-wave voice starts out by being divided into four sub-octaves, then mixed back together with a 'wave-shape' joystick. after that, the signal would be sent through a 'digital-distortion' circuit based around the holtek HT8950 chip. the intended purpose of the ht8950 is to be used as a robot voice changer or voice pitch changer. it does a terrible job at both. however it excels as a tunable distortion/bit-reducer. in my opinion it is much more useful than the traditional method of running the audio through an analog-to-digital converter alone. the bit-rate can be tuned lineally, then transposed to 2/1, 8/5, 4/3, 1/1, 8/9, 4/5, or 2/3. both the bit-rate and transpose functions can be set manually or with the after-touch. the 'digital-distortion' stage can also be mixed with the initial signal or completely bypassed with the wet/dry mix, or 'distortion bypass' knob. after the 'digital-distortion' stage, the signal is then sent to the 'chorus' stage. this stage basically acts as a delay with no feedback. the circuit is based around the pt2399. the delay time can be set by the 'chorus threshold' knob or by the after-touch. the delay time also has a dedicated LFO. while engaged, the 'chorus threshold' knob sets the depth of the LFO to the delay time. the LFO rate can be set with the 'chorus LFO rate' knob, or by the after-touch. like the distortion stage, the chorus stage too can be mixed with the initial signal or bypassed with the 'chorus bypass' knob. after the chorus stage, the signal is sent to the filter stage. the filters are OTA based 12db low-pass filters. each of the two voices has a dedicated filter, attack/decay envelope, initial cut-off control, envelope depth control, and envelope LFO. while engaged, the 'envelope LFO' rate can be controlled by its respective knob or by the after-touch. after the filter stage, each voice is sent to its own VCA. the two VCAs share one common ADSR envelope, but each voice has its own envelope depth control. like the filter stages, the VCA too has an 'envelope LFO'. the rate can be set by the 'VCA LFO rate' knob, or by the after-touch. after the two signals are mixed by VCA stage, the combined signal is sent to the 'effect' stage. the effect stage is a modified Behringer delay pedal. originally the pedal was set up as an usual digital slap-back delay pedal. the pedal employs the coolAudio V1000 multi-effects DSP. the chip is controlled by an atmega chip with a custom Behringer program to utilize some of the DSP's delay features. there are four CV inputs to the atmega chip to control Level, Feedback, Time, and Mode via 50k potentiometers. initially i thought it would be 'cool' to send CV's to the inputs to control each parameter, but i found the zippery response pretty off-putting. then i fried the analog input to the time CV on the atmega... i decided to disconnect the atmega and simply run the V1000 chip's presets. it has a total of 16 different delays, reverbs, and filters. trying to reverse engineer these pedals is pretty much impossible since the circuit boards are multi-layered with tiny tracings, but once all of the excess hardware was removed, the effect worked like a charm. i used a four bit rotary encoder as a mode select switch, and i replaced the clock oscillator with a 74ls124 voltage controlled oscillator. the VCO has two CV inputs; FX CV-1, and FX CV-2. each can be set by its respective slide pot, or by the after-touch. the effect stage has a wet/dry bypass knob as well. this stage of the signal path ended up being way more powerful than i expected. adding clock control to these DSPs is HIGHLY RECOMMENDED! after the effect stage, the signal is sent to the power-amp that drives the built-in speakers. 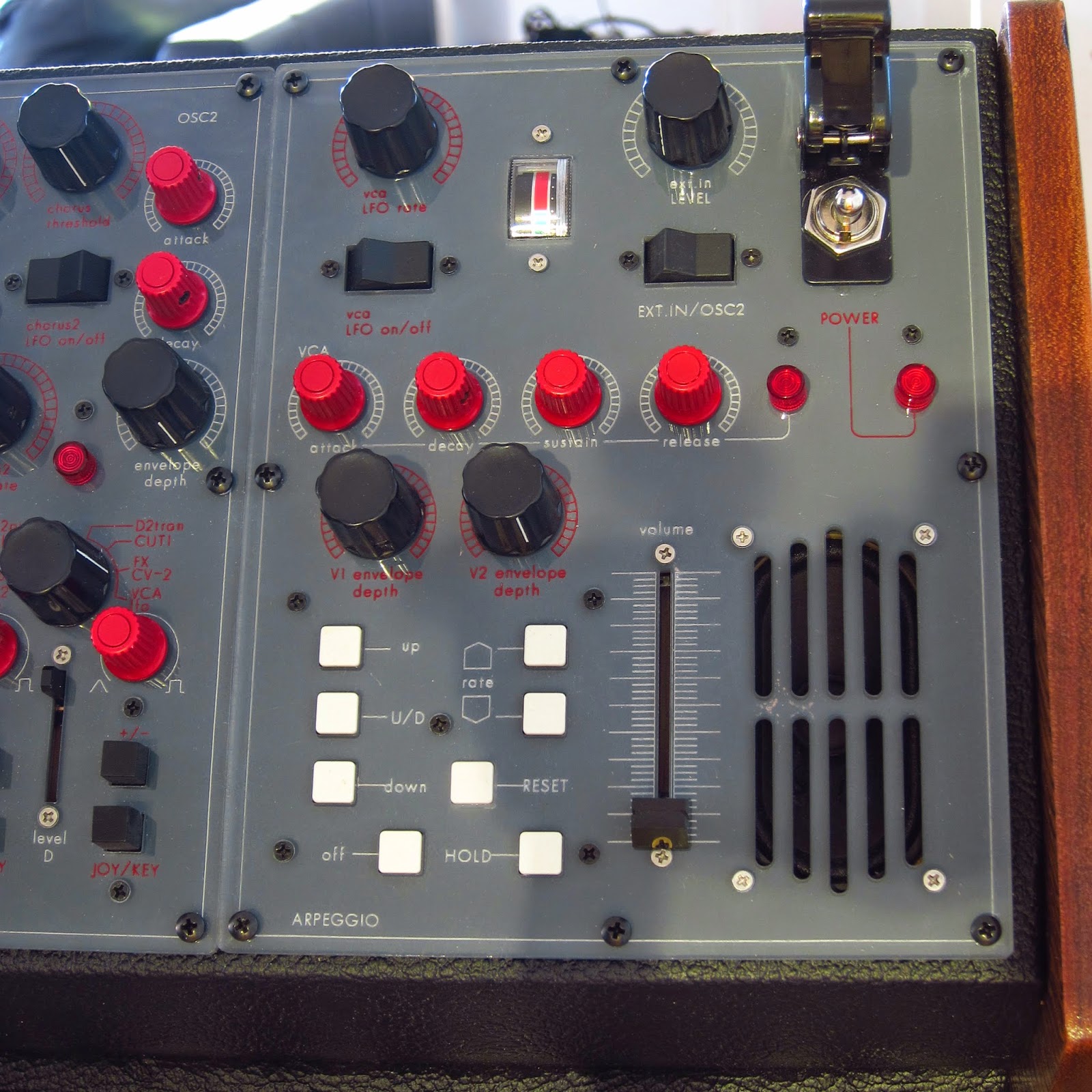 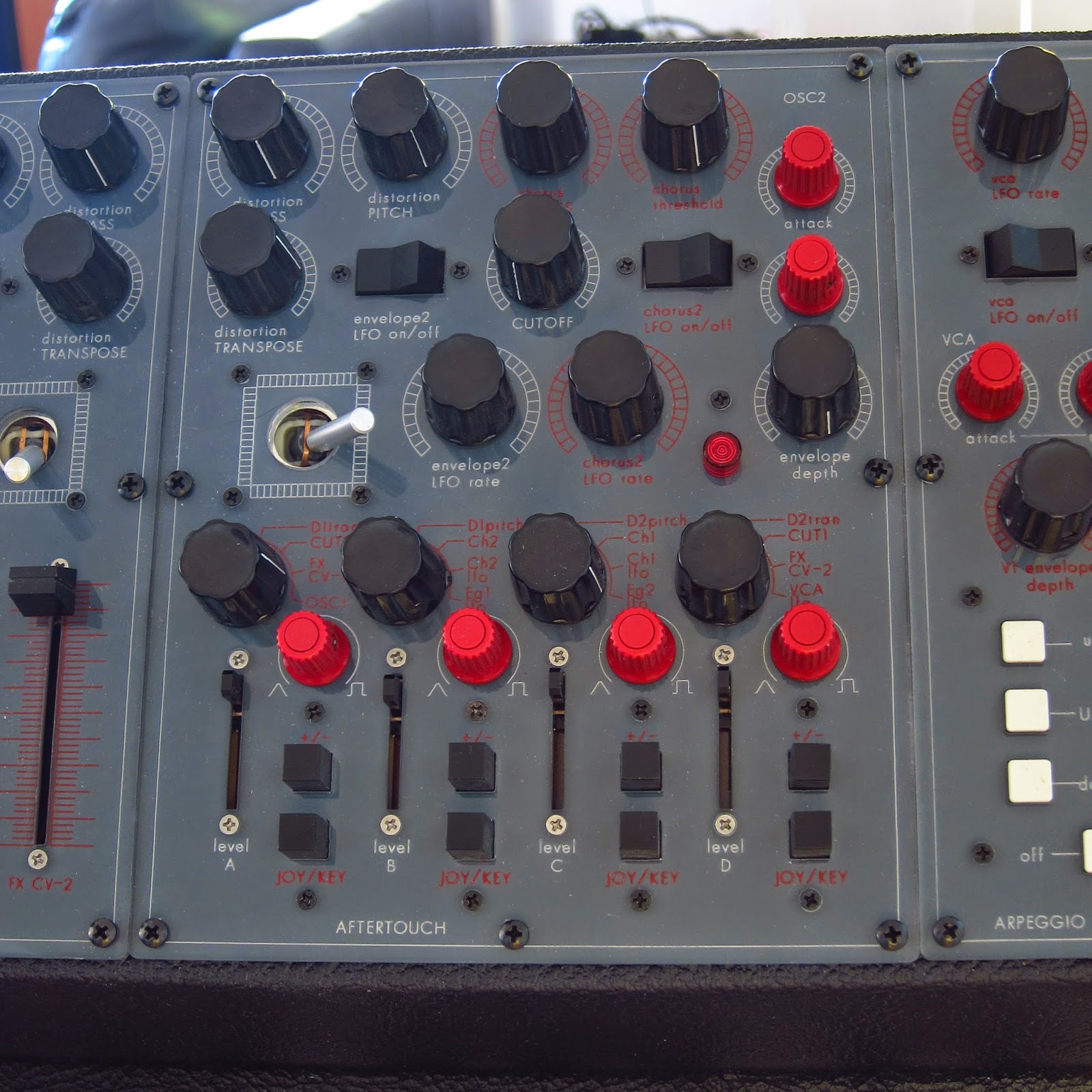 Once all of the circuits were working, it was time to design and cut the circuit boards using a CNC engraver. after that they would need to be assembled and wired up. while assembling the circuits and wiring up all of the hardware, i used cardboard mock-up face plates to hold everything together. if i had used the final-draft face plates, they would have likely become damaged by the intrusive process of connecting and debugging all of the hardware. once it was all working properly, then i could focus more on the design of the interface. the buyer had one more request that came in just in time, because i was just about to cut the final-draft face plates. he asked if it was possible to add an audio input for processing external signals. seemed simple enough so i said sure! unfortunately it was a pretty difficult circuit to build 'in-circuit'. the input would take the place of OSC2 when engaged. unfortunately all of those signal processing circuits that i had already built were really only set up for nice clean waveforms. plugging in guitar or other audio sources sounded pretty weak in comparison... after spending a couple of weeks on it, i came to the conclusion that there was no way to make it sound better without completely overhauling the signal path. and really, the quality wasn't so terrible. just not ideal. i explained to the buyer that it was doable but it would be limited, and he didn't mind, so i added it in. i also included an input volume control and an analog level meter so that the signal can be leveled before plugging it in to the signal path. 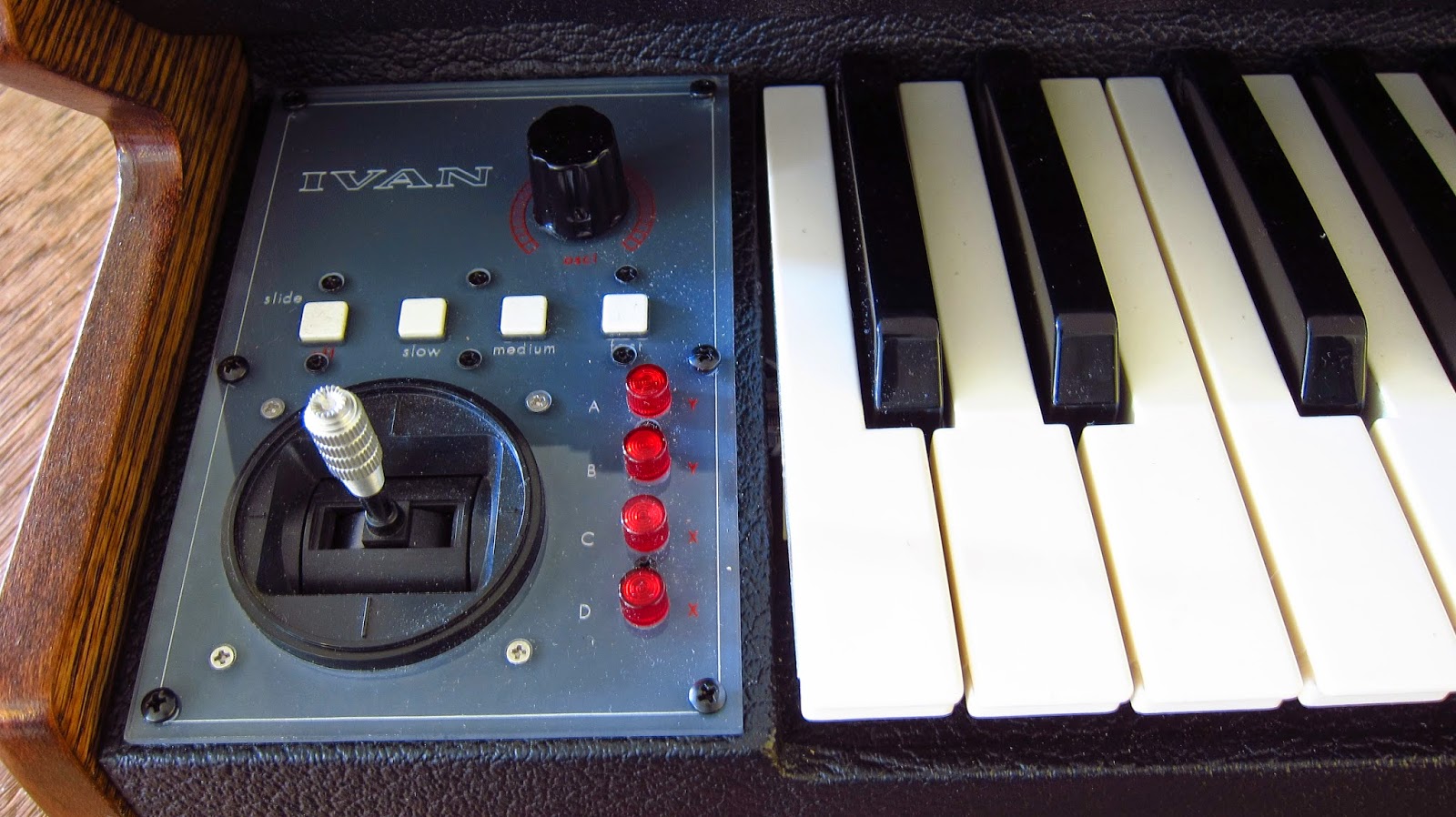 Once i was sure that all of the circuitry was finished and working, i then cut the face plates. i chose white and red text on a gray background. once the face plates were cut and dry, i swapped out my now very tattered cardboard mock-up panels with the final-draft. from that point everything seemed like it was coming to a close, but there was still a lot of little things to do. i still had to cut the back panels, the bottom metal plate, and i still had to laminate and stain the wood cheeks that i had been neglecting. 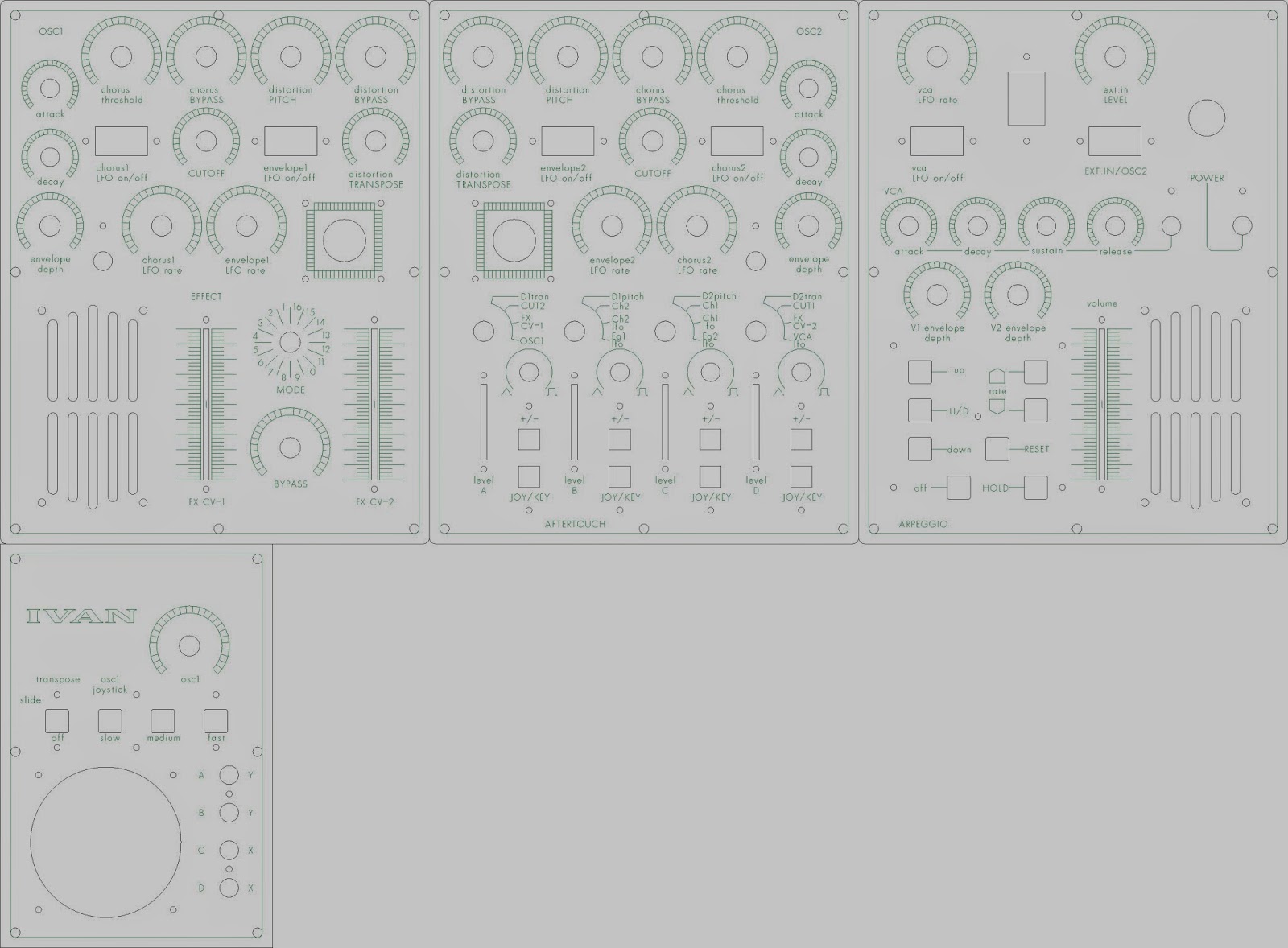 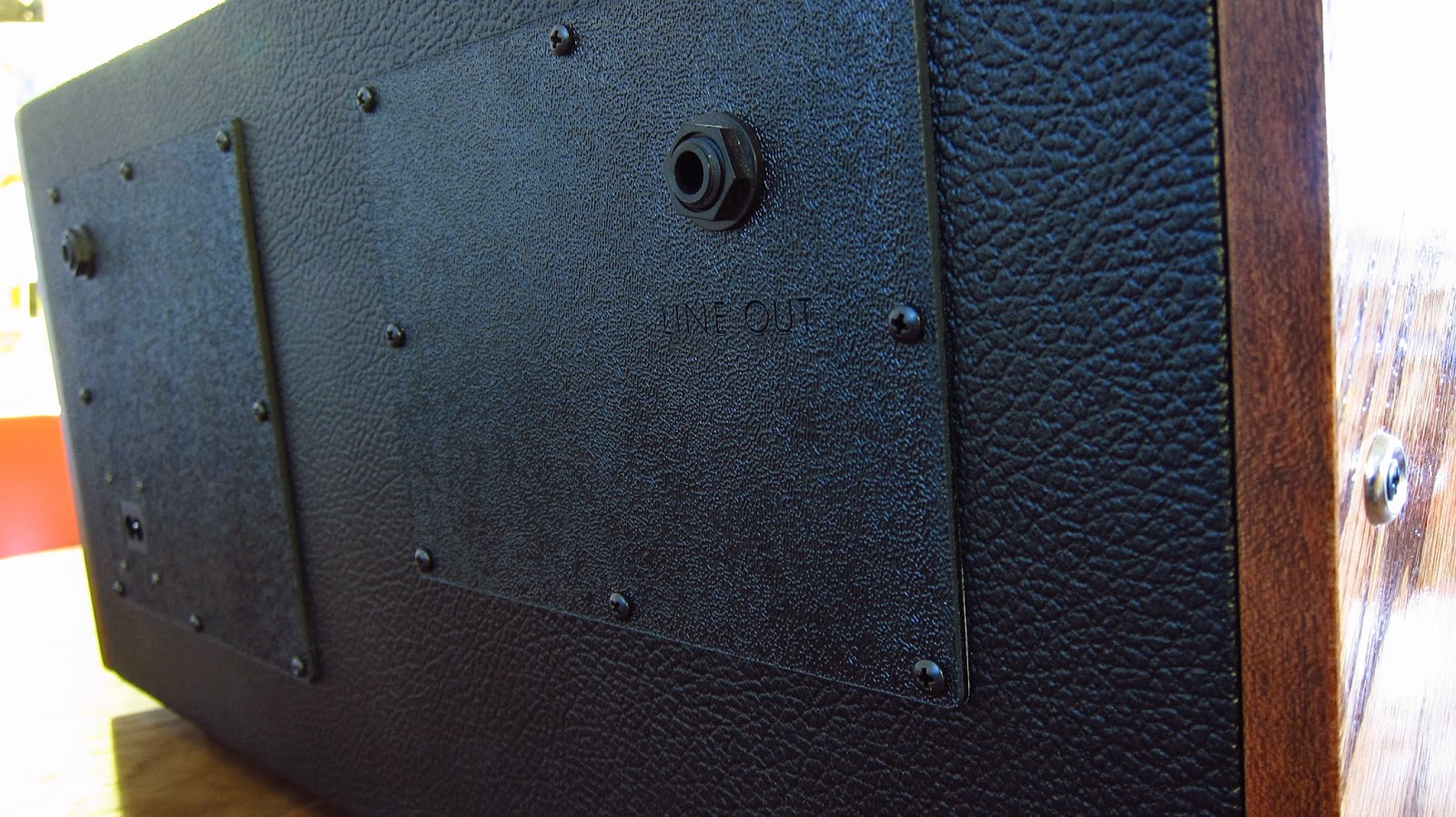 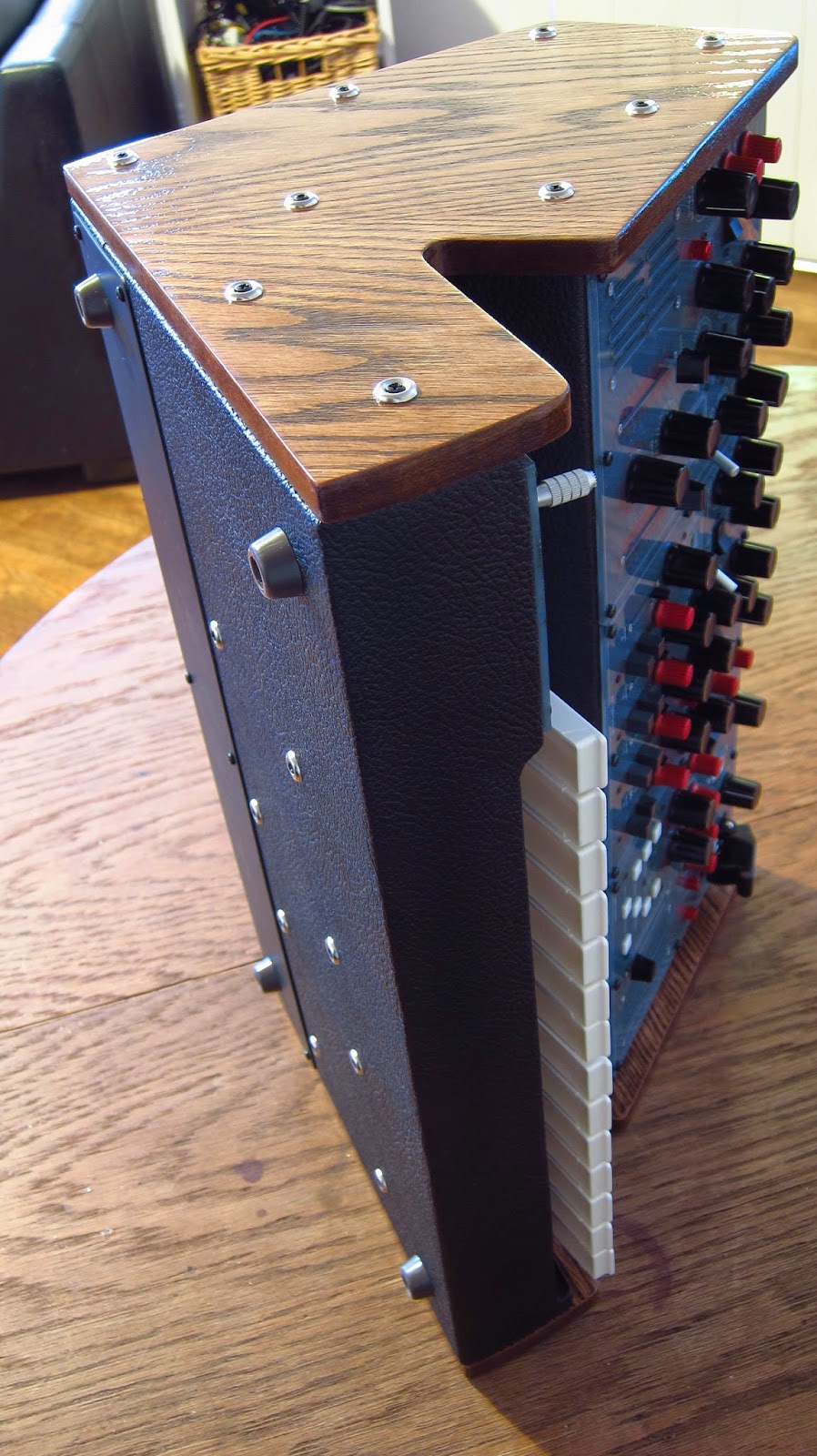 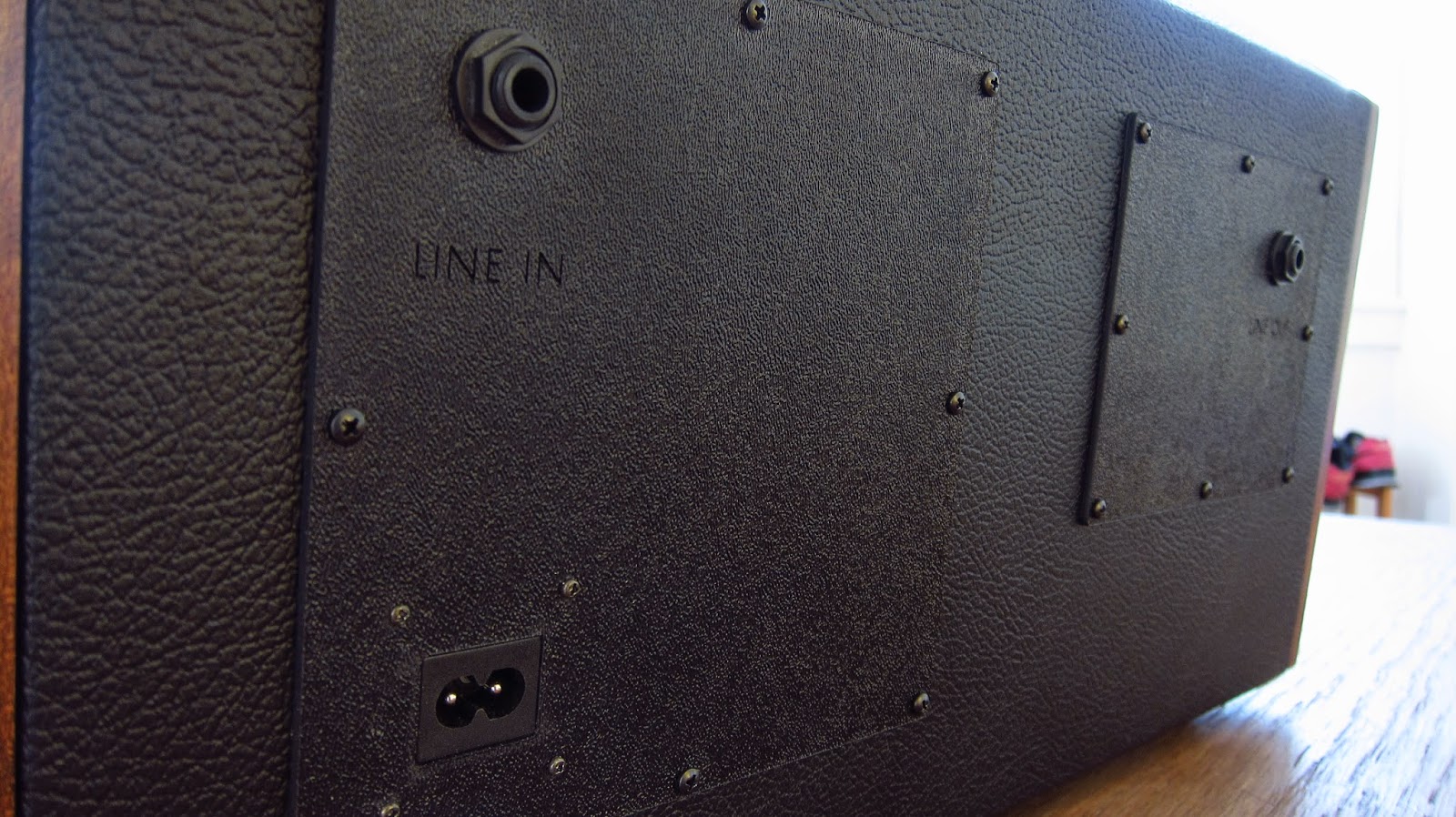 The back and bottom plates were pretty easy, but the cheeks gave me real problems. unfortunately i didn't wait long enough for my industrial grade contact cement to set up on the surfaces of the cheeks and wood veneer before i pressed them together. they were still wet a couple of days later when i applied the stain. a couple of days after that i coated the cheeks in polyurethane. it seemed like it went on just fine, but when i came back a few hours later, giant bubbles had formed underneath the wood veneer. i sanded all of the polyurethane off hoping that i could salvage the cheeks. actually, only one cheek was effected, but the wood grain matched symmetrically, so losing one meant losing both. unfortunately it was a losing battle. the stain and the contact cement had combined and somehow dissolved big gooey areas in the veneer. i tossed them, and i tossed that nasty contact cement. well actually all that stuff is still in my basement, but you know what i mean. i laser-cut some new cheeks and headed to Woodcrafters for some more veneer. this time i got some red oak. it's not as subtle as the cherry wood i used the first time. in fact, it's downright DISCO! ok ok, so the next batch came out great. this time i just used good old wood glue and a impromptu press made up of all of the heaviest things in my house. after staining and polyurethane, it was finally looking done. i kept it for about a week or so to make sure there were no other bugs before sending it off to the buyer. all that was left to do is write up an eight page user manual...
Goodbye Ivan. you will be missed. 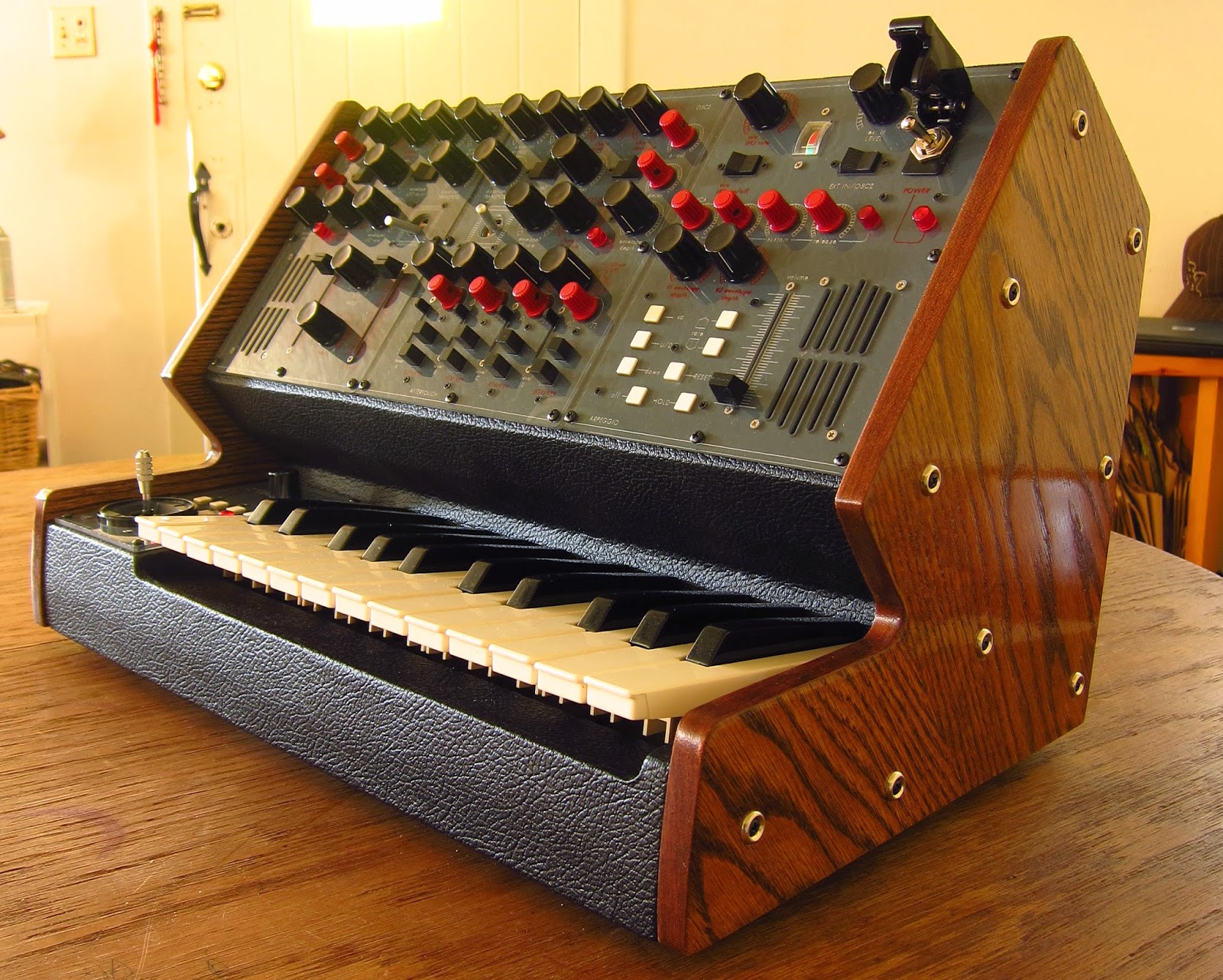