Hello!?...
I have been clearing out my workshop and getting rid of things I don't want or have time for, in the hopes of someday getting back to circuit bending and blogging again, but just for my own amusement.
I am making a lot of progress, and my workshop is looking great, but I have run into some things that are too precious to throw out but not worthy of selling in the condition they are in. I had been holding onto this Waddingtons Compute-A-Tune for at least a decade, and I couldn't bring myself to throw it out. It had some major issues and was not worth even trying to sell for $20...
The Compute-A-Tune is a very old toy keyboard that i think was only sold in the UK in the early 80's. The synthesizer is based around the TMS1000, which if I am not mistaken-was the first microcontroller!
Unfortunately the original knobs that controlled the volume and "effect" had broken off, and the circuit-board inside was heavily corroded since there didn't appear to have ever been a solder mask.
So rather than just throwing the whole thing away, I decided to give it a face lift. I started by reverse engineering the circuit, and found an additional tempo, and another chord mode. Now to come up with a some modern upgrades. I started with the power supply. The TMS1000 needs at least 15 volts to even turn on. The keyboard ran off two 9 volt batteries in series. This seemed wasteful to me so I built a circuit that would provide the TMS1000 17 volts from one 9 volt input using an ICL7660S charge pump chip. These chips can be noisy and don't deliver much current, but in this case there were no issues, since the keyboard is already pretty alias-y, and very digital sounding. The next step was to try and find a way to get the playback button to repeat after the recorded melody had played through. For this, I used a CD4098 dual monostabe multivibrator chip. I have been using these a lot lately. They are a very useful chip for lots of reasons, but in this case i used the chip as a re-settable pulse delay. Essentially, the gate output from the recorded melody re-triggers a a delayed pulse, and as soon as there is no gate to reset the delay, the pulse is able to re-trigger the "PLAY" switch, causing the recorded melody to  play continuously.
The next thing to do was create a more interesting mix of the square wave tone and its three available sub octaves. I had seen a schematic floating around for a diode VCA used in Lunetta circuits, but I had never actually tried it before. I was pleasantly surprised with how well it worked, so I built one for the top octave and another for the three subs. I used a CD4093 quad Nand gate as inverting buffers for the VCA's, and for the sub octaves, I added a PWM filter and a mixing switch to set different combinations of the sub octaves Nand-ed together. With the remaining two Nand gates, I made two separate trapezoid  LFO's; one to modulate the PWM, and another for vibrato.
Next, I needed envelope generators for the VCA's, so I crafted two looping attack-decay envelope generators from a CD4013 dual flip flop chip. I haven't seen a circuit like it, so if you're inclined, take a look at my schematic. It is simple but useful.
Once my circuits were all tested and working, I went to work redesigning the keyboard and the interface. I cut out circuit boards on my desktop CNC, which is always fun... The most challenging part being the circuit board with the thumb-wheel pots, because the circuit board had to line up perfectly with the existing mounting hole, and the pots had to stick out of the shell just right. Somehow it came out perfect the first try. Completely measuring the shell and creating a 3D model of it helped.
Assembling everything was slow and tedious. I really didn't want to screw it up, and there wasn't a lot of room to make mistakes. I was able to find a battery compartment that hold 6 AAA batteries from a strange flashlight repair parts site. It seemed like a strange site, but the battery compartment was only $4, so I gave it a shot and it arrived in a couple of days. The battery compartment needed to modified slightly, but it fits perfectly inside the original cavity.
There were a few mistakes along the way, but for the most part, everything came out as planned. One thing that I only noticed once the mod were done, was that the "TUNES" function is pretty much useless... I had thought that you could use the four settings as places to store separate recorded melodies, but I was wrong, and they only work to set the demo melody when the power is reset. Had I known this, I wouldn't have included the setting in the mod. Oh well.
I took lots of pictures along the way. click on any of them to see larger views. 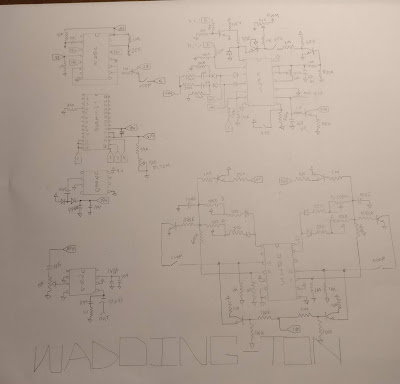 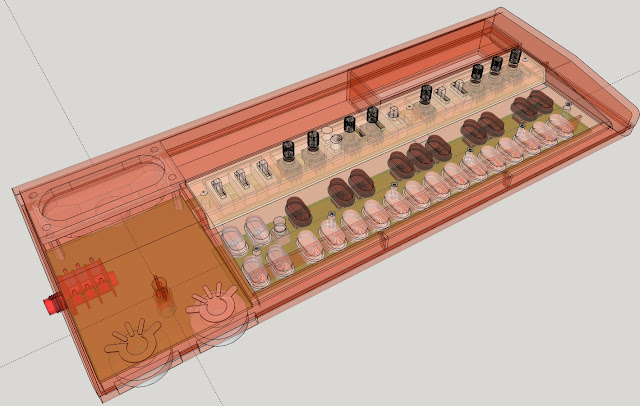 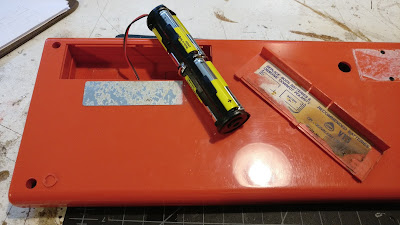 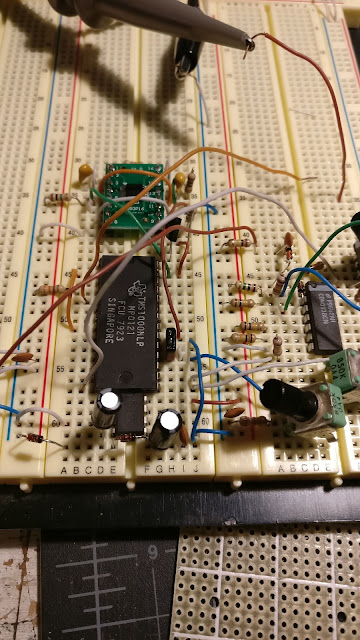 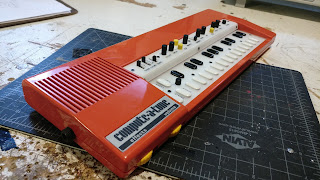