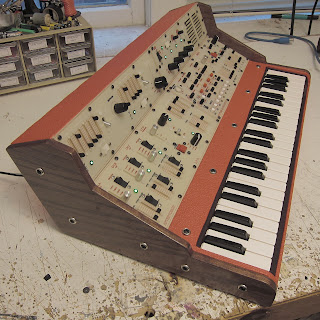 Welp, i guess its time to update stuff. its been over a year since i posted a short demo clip of the yamaha ps-3 i had been working on. the synth was for a customer who wanted something unique and wasn't too worried about the cost. i convinced him that the yamaha ps-3 was a good baseline for the project. i have always been fond of the early ps series for many reasons. one being that the keyboard assembly is very well built. each key floats independently so there is no chance of them breaking off as some toy keyboards do over time. if a key should ever break however, it can be easily replaced. another selling point for the ps-3 is that it has genuine yamaha VCF and VCA integrated chips built right in. the VCF chip is a pin for pin match to the VCF chip found in the yamaha CS01, and the VCA chip can be found in nearly all of the CS-family of synthesizers. and to top it all off, if you scour ebay for a week or two, you can score a ps-3 for next to nothing! the volume knobs are usually the fist thing to go on these classic toys so people are practically throwing these things away... with that said, i would hope that those of you who are reading this will refrain from snatching up piles of ps-3's with the intention of selling the ic's and trashing the rest of this classic keyboard for some profit... but if you do, it might ease your conscious to use some of that blood money to ship those useless keys over to me for future use. i'm always looking for some quality keys.
ok, anyway... being that the ps-3 is so readily available, my client sent me two. one to use for the synth mod and one for me. i purchased the service manual on ebay and began brainstorming ideas for the super-synth. the first idea that i knew i wanted to implement was a pressure sensitive key-bed. i had recently purchased a few long force sensing resistors from sparkfun. i still can believe how cheap they were. as soon as i saw them i knew i wanted to put them underneath some keys. i quickly got started cutting up the keyboard and removing all of the excess plastic body from what held the key assembly together and fitted the FSR(force sensing resistor) underneath the keyboard and positioned it for optimal response. i then built a simple circuit to convert the FSR to a control voltage. once it was working i quickly began interfacing the control voltage to parameters of the keyboard such as the pitch and filter cutoff as can be seen in the earlier video.
the enclosure? oh yeah, i may have mentioned long ago that i purchased a laser cutter. i guess now that i think about it, this must have been the first synth project i used my laser for. what is a laser cutter? well, basically it is kind of like a big printer. but rather than printing, it cuts two dimensional shapes out of wood or plastic. i had been researching laser cutters for a about two years before i finally got one. since i have it has changed everything though. rather then relying on what you can find, you can merely design it on sketch-up and cut it out... well, the method isn't without its share of limitations but hell. it opens up a lot of possibilities.
so, as much as i loath google and all of that "convenience", i must say that i love sketchup! it has got to be the easiest CAD program i have ever used. only hours after downloading the demo, i was designing synth enclosures with accuracy and perspective. and to convert the files to the appropriate format for laser-cutting, i merely installed the full trial version on my other computer for converting the files to the appropriate  format before sending to my laser. i think i have used about 8 minutes of my 8 hour trial period so far. ha-ha! 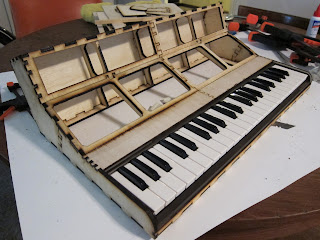 once the enclosure had been cut and glued together, it needed to be tolexed. i have really become fond of tolex. it really gives the synth some vintage charm. for this project i went with red. it came out pretty well but in retrospect i probably should have sanded the edges a bit more. some of the edges of the teeth ended up being noticeable through the tolex in the back of the synth. it is somewhat visible in the picture below. 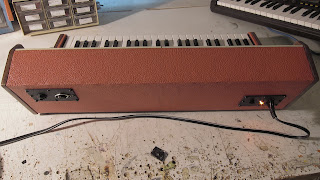 here is a shot of the tolex process. you really cant have enough clamps. thank god for harbor freight. 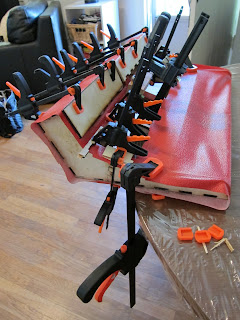 here you can see the force sensing resistor apparatus(black strip). some care had to be taken to achieve a good response from the ps-3's keyboard. 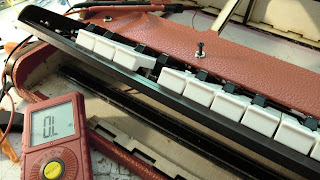 here is a shot of the ps-3 unmolested. 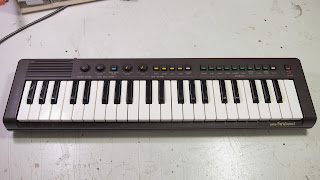 deciding what features and controls would be included was a pretty long and arduous process. it was probably the most time consuming of the whole six months it took to finish this synth. after working out the after-touch capabilities, it was on to how i would modulate the VCF and VCA. i could have built my own envelope generators but my attention was drawn to the brilliant mastermind ElectricDruid and his PIC based generators. i was instantly enticed by his simple but extremely versatile designs. now keep in mind i know virtually nothing about programming micro controllers. i couldn't even tell you how i was able to get his code onto my chips, but it worked, and well! in total i built three generators. two of them were the voltage controlled ADSR's for the VCF and VCA. the third was the AMAZING voltage controlled LFO. i would highly recommend these circuits to anyone who is serious about modular synth stuff because everything about these circuits is voltage controlled. for more info on the capabilities of the generators, please check out his site; http://www.electricdruid.net/
once the envelope generators and LFO were built and working, it was only a matter of deciding how to interface them and incorporate them to the rest of the interface. below is a diagram of how what the interface includes. the two panels to the left represent most of how the envelope generators, LFO, and after-touch section interact with the overall sound of the synth.
in the ps-3 there is a rhythm section. there are preset rhythms and analogue drum sounds. the preset rhythms are not exactly inspiring so i decided to create a sort of rhythm computer. unfortunately only three of the four analogue drum sounds are trigger-able externally. the bass drum sound is only trigger-able via the internal rhythm sequencer. fortunately though, each of the other voices have unique modulation inputs. the tom-tom, snare, and hat sounds each have unique pitch/accent capabilities that can be simply modified through the use of a potentiometer. however i still felt that a kick drum was needed. i built a quick clone of the TR-606 kick with two separate pitch controls for creating just the right "thump" if needed.
i had recently been inspired by a video i had seen at electro-music/forum of somebody using an old shift register chip to write and loop a logical pattern. at the time, flip-flops and shift-registers had seemed to be a new frontier for me so i willingly jumped in and learned as much as i could about the method. i sourced some shift registers of my own and came up with a circuit for recording four separate sequences to trigger the four analogue drum sounds. it worked out pretty well and i have to say that i am pretty proud of it. basically there are eight different time signatures that can be recorded live to one of four 64 stage pattern banks. the pattern can then be edited in step mode or completely erased using one button. the patterns can also be recorded out of phase form the other patterns to create a kind of swing effect. there is no code involved with these sequencers. they are as low-tech digital as it gets. check out the schematics for more... 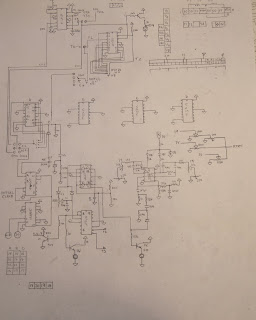 the ps-3 came equipped with nine timbres. most of which are the same sound through a different combination of VCF and VCA envelopes. there are then two octaves of the main oscillator that are being fed to the timbre filters; 4' and 8'. since i had freed up the VCA and VCF to manual control via the ADSR's, there was no longer any need for the nine timbre selections. instead i chose the three timbre filters that represented HP, BP, and LP best, and designated the three filters to each of the 4' and 8' voices. each timbre of the two voices can be completely attenuated to create infinite voice combinations. see the schematic for more... 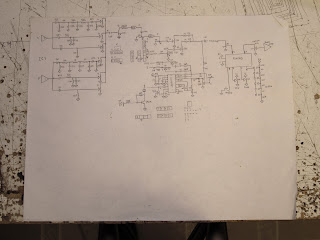 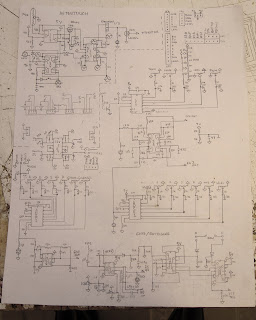 furthermore, the lowest octave can be switched to accompaniment mode witch will hold the set bass and/or chord when active. volume controls for both the bass and chord are independent. the keyboard is also equipped with a reverb circuit that has i think 6 different modes. both the master rhythm and master melody voice are fed to a mutual echo circuit. the echo circuit can be modulated by the after-touch, LFO, or VCA. the keyboard is also equipped with a highly liquid midi kit for controlling the keyboard via computer, sequencer, etc. 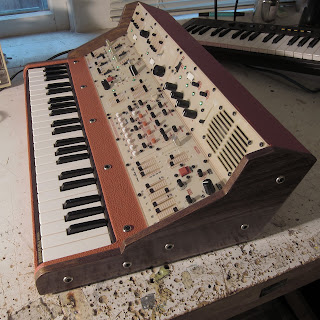 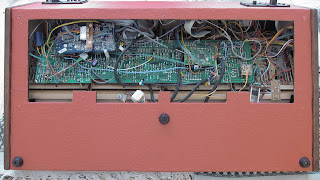