i started this project a week ago today. i was thinking of doing up another mini glitch keyboard but i wanted some better rhythms. i found this old barbie keyboard laying around that had some pretty nice semi analog drum beats. i broke it all down and found that the keyboard could in fact run off of 3 volts, but in the process of deconstructing the circuit i found a bunch of hidden voices, rhythms, and functions that were too cool to leave out of the project. in order to fully utilize all of these functions, i would need a lot of switches and pots, and there wasnt enough surface area on the mini keyboard. instead i used this little baby organ toy that i had laying around. it to only held two AA batteries, but the battery door was big enough to fit 3 AAA's after a little modding. the thing that i really found interesting about this circuit is that not only are there two outputs from the chip for keyboard tones and rhythms, but there is a third output that is soldered directly to the rhythm output. after disconnecting them, i found that the snare and hat sounds are on a separate channel that the bass drum and cowbell. i really could have gone very minimal with this project and just made it in to a drum cube or something, but i decided to go all out this time. basically i designed my own functional interface with all the new easteregggs i found, added a volume mixer pot between the two drum signals, added two pots to slightly change the rhythm output envelopes, pitch bends(fine and coarse), replace the transistor r/c amplifier circuit with a 386 with adjustable gain and feedback, added a vcf to the keyboard tones, added 4 separate lfo's to trigger each drum sound with adjustable frequency and on/off switches, and made it possible to switch the cowbell and bass drum lfo to modulate the vcf and pitch bend respectively, with or without triggering those drum sounds. the function switches are set up like this; since there was not enough room(or time in the world) to cut and put in 27 momentary switches, i just put in 11. one is to turn the power on and off, two others are for increasing or decreasing the tempo only, the other 8 are hooked up to a three position switch that is also hook up to a tri-colored LED. in one position the buttons will select rhythms, in the second voices, and in the third functions like rec/playback, rhythm start/stop, etc. in each of the three positions the LED will glow in a different color, red green or blue. what else... oh yeah, since i decided to only use one octaves worth of keys, there is a transpose switch that moves the keyboard up one octave. so far thats it. now i just have to decide on colors. more to come. here are some pics so far. 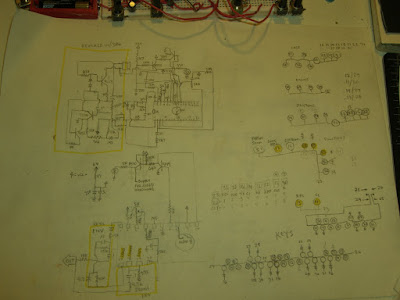 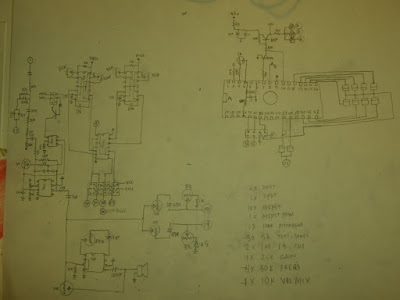 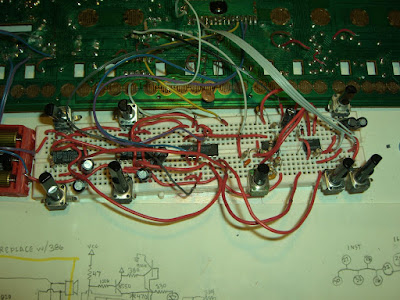 that blob in the middle is all i need 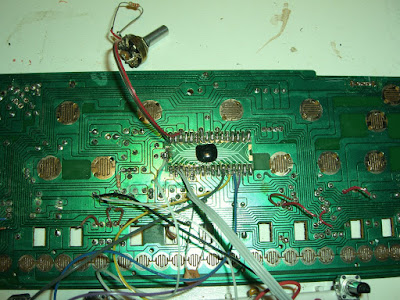 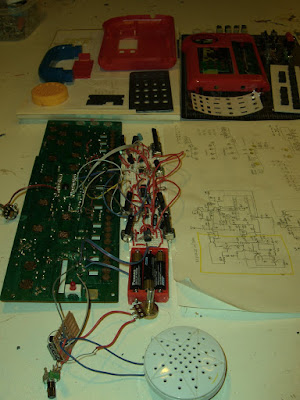 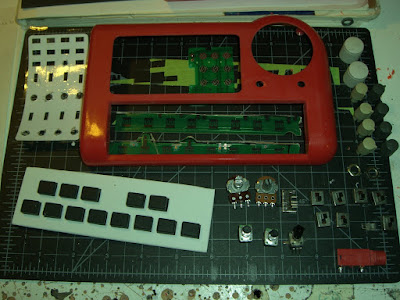 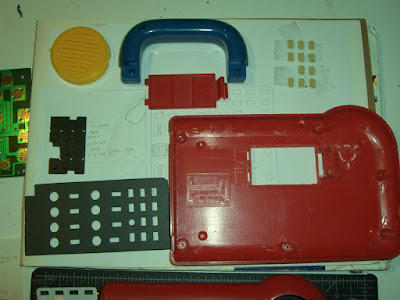 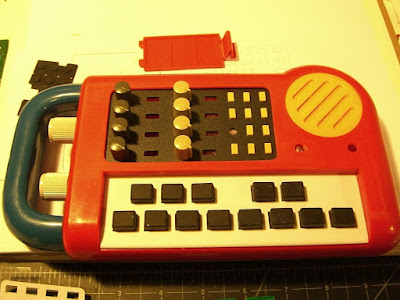