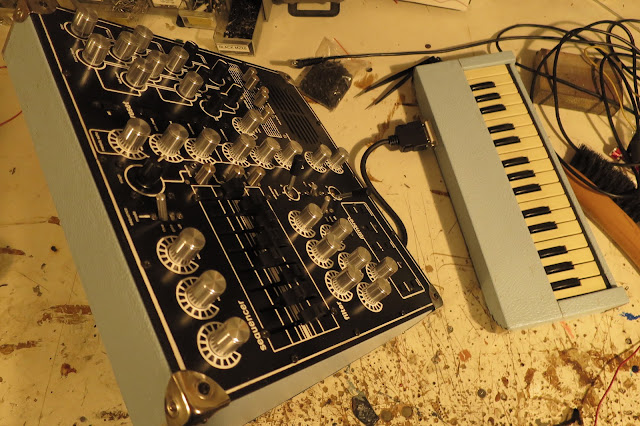 Got a friendly message from none other than Mike Walters of Mystery Circuits. He had been tasked with repairing an odd-looking synth that resembled something I would make. Sure enough, it was the heavily modified Yamaha PSS-30 I had built on commission some 8 years ago. I let him know that the keyboard was probably a total mess inside, being that it was one of my earlier mods, and that it would be easier for me to have a go at it since I built it. The owner was OK with it, so he sent it my way. I always love seeing my old creations years later. I sometimes wish i could go back in time and help my former self with advice or some basic knowledge I've learned through experience. Needless to say, the PSS-30 was a total mess that not even I could decipher... the keyboard was still pretty much functional, with the exception of a few broken wires inside and some sticky switches. However, the audio signal path was just so dark and thin. I was not great at mixing signals at this time in my modding career. I really wanted to rebuild some of the circuitry inside, and get a good strong signal, but the pile of circuits all nested together were too annoying to try and separate and reverse engineer, so I decided to just rip everything out, and rebuild it all properly. The theory of the mods were all pretty basic, so I was confident I could rebuild it in no time. Of course it ended up taking a lot longer than I thought it would. I have tried to make time for electronics when I can, but being a dad takes all the best hours of the day. I am able to squeeze in a few hours after my kid goes to bed, but those late night hours are never as productive as a fresh day to myself. Oh well, I'll take what I can get. 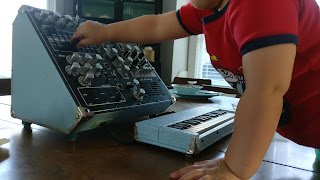 I was able to re-design and rebuild everything over the course of a few weeks. I ended up making a lot of changes to it to make it more stable and usable. For one thing, I replaced the 74LS624 pitch oscillator with an LTC1799. This gives the sequencer a lot more range, and the LTC1799 uses a lot less power. I replaced the crappy AR generator with 555 timer type. There was a knob labeled "release" that really just controlled the trigger length of the original AR generator. Since it had no use in the 555 circuit, I created a voltage divider and sent it to pin 5 on the 555. It acts as sort of a range control. At lower attack and release times, the range control will hold the envelope at its peak for a good while before releasing. I replaced the drum voice circuit, too, with an arduino with four PCM drum sounds. The original drum sounds were analog, but needed a gate-to-trigger circuit for each one, and the "accent" knobs were actually more of depth/decay controls. each drum sound would have to be fine tuned to be rebuilt, and I didn't think it was really worth it for those sounds. Instead, I programmed an arduino with some code from DSP SYNTH with some custom drum sounds. The "accent" knobs now control the pitch(bitrate) of the individual samples. Other than that, everything else is pretty much the same. At least functionally, that is. It was a lot of fun rebuilding this thing, and it was great to get reacquainted with my workshop. I am feeling confident that I will be able to spend more time building electronics and tinkering with new ideas, so keep watching for more to come. And thank you to everyone out there that is still reading my blog and writing to me. It is very encouraging to get your emails.