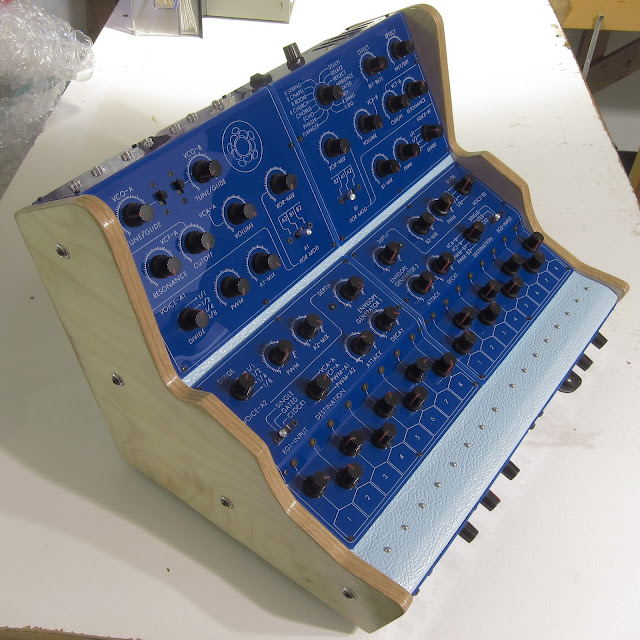 Well! it has been a long time since my last post. it has been a pretty busy past few months. Heidi an d i bought an old fixer house in southeast Portland in late February, and there has been little time for new projects that are not related to fixing up an old-dump house. but inevitably we got in and set up, and i have been spending most of the last month and a half building a custom synth for none other than Meng Qi! he contacted me shortly after my last post, and asked to have a custom synth made. he was willing to wait until i was moved and set up in my new shop too. how could i resist?

After some back and forth, we came up with a general formula for the synth-to-be. it would be comprised of two sequencers with capacitive-touch sensors, two voices with analog filters, frequency modulation, reverb, a few modular inputs and outputs, and a Meng Qi logo. knowing that this would likely turn in to a pretty large and time consuming project, i quickly got to work designing synth. the project did end up taking almost two months to design and build, but actually, it could have taken much longer and i am actually kind of impressed with how quickly this one came together, considering the complexity of the build. 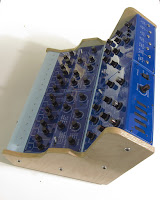 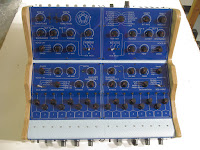 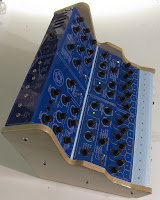 The first thing i drew up was an overall signal path schematic to work from. from there i prototyped each part of the synth in small sections. and by small, i mean four breadboards stuffed with circuits. prototyping is always a little difficult on this scale, because it is not really possible for me to build the entire synth with all of its hardware on breadboards. i suppose i could try, but i have found that a circuit on a breadboard will likely always need some amount of debugging once converted to a circuit board. my resolve is to design everything into working sections, connect them to their respective hardware, connect them to each other, then cross my fingers and turn the power on. crossing my fingers has never helped though. certainly not in this instance. however, when all of the shorts and reversed connections were solved, the sections of this synth all played pretty well together. i didn't have to swap out too many components, which was nice for a change. 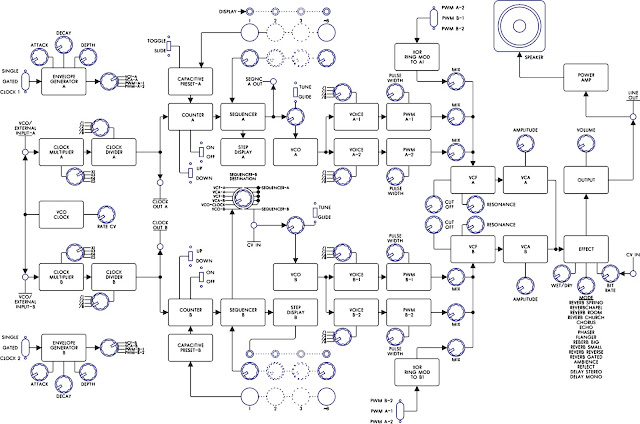 One thing that did kind of give me trouble though, were the capacitive sensor switches. i bought several of these capacitive modules on ebay from china. the TTP224 was something that i had always wanted to play around with, and this was the perfect chance. the modules are very cheap, and have lots of modes to choose from. i tested the modules when i got them just to see how they worked, but i actually didn't test them with the circuit until everything was wired up, so i really had no idea if they would work, and my whole interface was kind of designed around them, so i crossed my fingers extra hard this time. thankfully they worked just fine, but i did have to change the design a bit once i was able to actually see how the sensors would play with the rest of the device. initially, i had thought it would be cool to have the ability to change the input mode of the sensors from SINGLE to TOGGLE, but in order to do that, the power to each module has to be turned off before the mode can be changed. that reset period has to be held for a good second too, to get the module to fully power down, so the mode switch was a three position switch where the center position was reset. the whole idea was kind of goofy though, and when i was able to use the sensors with the rest of the circuit, i found that the TOGGLE mode was probably redundant, as well as confusing, because all or any of the sensors can be toggled individually, and since the inputs were being sent out to a priority encoder, it just seemed over complicated just to hold a specific step. the setting also conflicted with one of the envelope generators' mode, so i decided to get rid of the TOGGLE mode, and its goofy switch, and add some other cool stuff like an extra envelope generator mode, and glide for the two voices. 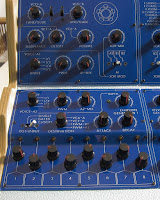 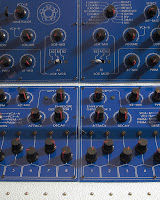 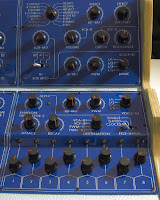 The design of the enclosure is an original design i made in sketch up. i thought it would be cool to try and incorporate some bent panels, just to give it an edge over traditional acrylic face plates. the rounded edges add a lot more character, i think. i had originally planned to paint the face plates a light beige color, but i really wanted to do a blond birch finish on the end cheeks, and i thought the beige and blond would be too conflicting, so we went with blue on a sky-blue tolex. the box assembly went together pretty quick with no problems. i have had my laser cutter for just about three years now, and i am still able to cut plywood and acrylic with little effort. that is unprecedented for a laser tube that is only supposed to last one year! i can definitely recommend buying one from
Full Spectrum Laser. 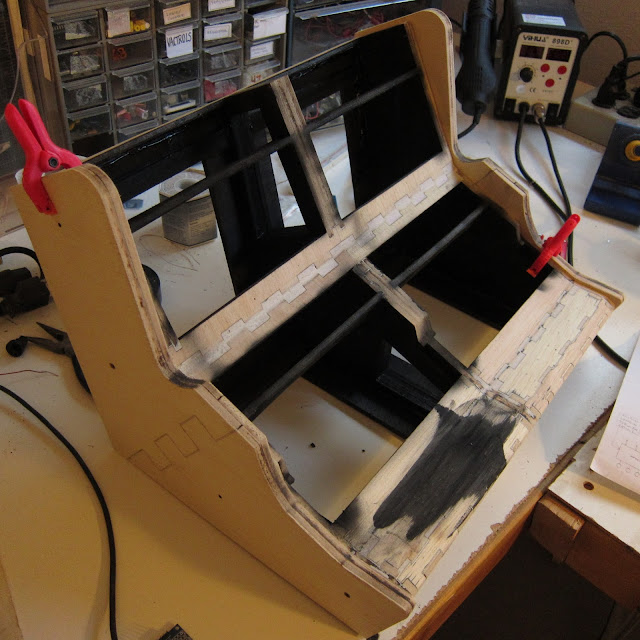 Once the enclosure was built, i quickly got to work designing the faceplate layout. once the orientation was generally acceptable, i cut some proto-face plates to mount the hardware in, and attach the circuitry. i usually use cardboard from cereal boxes for this stage, because they are disposable and flexible if i need them to be, but this time i used clear acrylic. the rigid plastic did make it a little more difficult to get at parts of the circuit than when using cardboard, but the clear plastic let in a lot more light, which was really helpful when trying to solder deep inside the box. 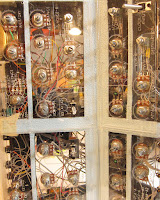 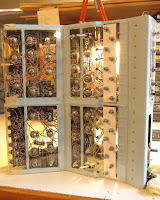 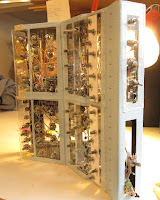 The circuit boards were mostly pretty easy to design, and i didn't make that many mistakes this time around. i ended up with four large boards for the voices, sequencers, and filters, and one small board for the power supply and loudspeaker amplifier. the sequencer boards were pretty easy to design , just because there were far fewer components involved, but they ended up having more flaws than the other circuits. i spent a significantly longer amount of time designing the voicing circuits, paying extra attention to not make any mistakes that would potentially be hard to find. they ended up working without too much trouble. actually, the biggest trouble maker throughout the whole project was probably with the hardware. i buy nearly all of my parts from China because the low prices are what really make it possible for me to do these projects for so cheap. the downside to that is sometimes you get some dud-parts. i never had this issue as much as i had with this project, so when something wasn't working, it was always the last thing i checked. i found three or four different dud-potentiometers total in this project. you get what you pay for i guess. 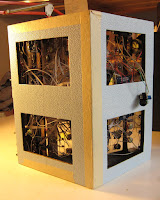 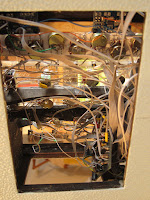 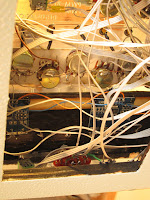 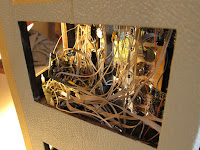 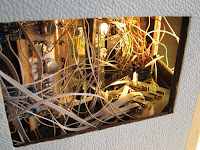 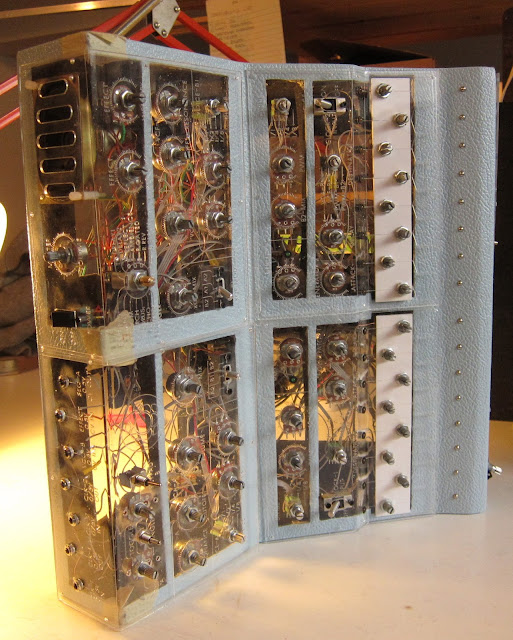 Once all of the circuit were mounted in place, and wired up to the hardware, i had to spend quite a few days tracking down all of the mistakes and fixing them one at a time. it is always pretty discouraging when you turn the power on and nothing happens. but you just start going through the circuit, bit by bit, until everything is exactly how it is supposed to be. when the whole thing was finally working, the next step was the delicate task of removing all of the wired up hardware from the proto-face plates, and carefully mounting them to the blue finished face plates. this is always kind of tricky because it is very easy to damage or scratch the paint on the reverse side of the face plate. i use water-based acrylic paint to coat the face plates, because enamels will cause the plastic to form stress fractures. the acrylic paint works great as long as it is not disturbed. for additional protection, i also laser cut dust-guard fabric to place between the faceplate and the hardware. it protects the paint very well, but getting all of the hardware through the dust-guard, and then through the face plates without scratching anything or breaking any wires is kind of a balancing act. it all worked out in the end, but the final week of this project was pretty damn stressful. 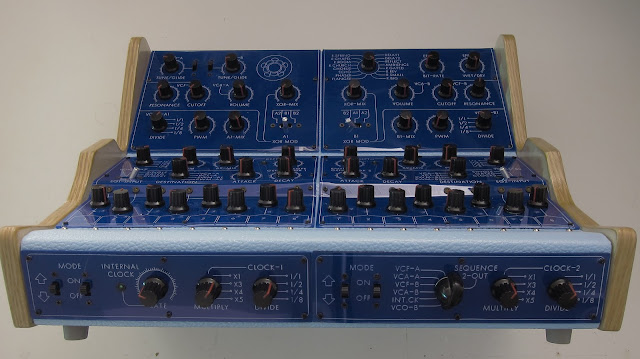 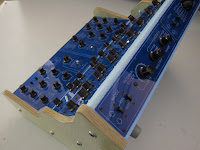 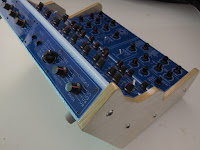 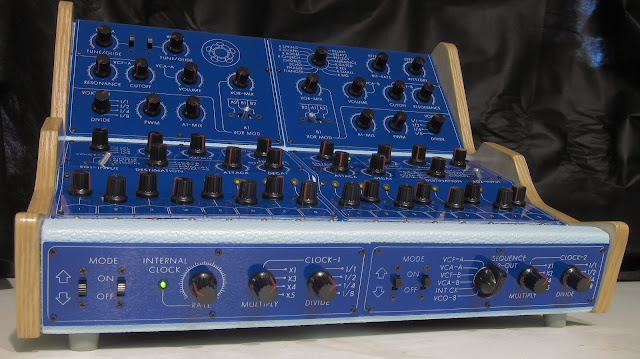 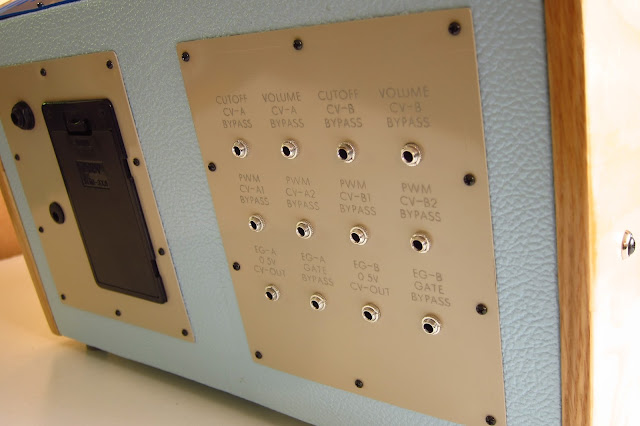