well, its been a long time since i've posted anything on here, but i have been busy. actually this might have been the longest project so far. hmm, where to start... soon after i finished my last project in early september, i started looking around my collection of toys and keyboards trying to come up with a new direction. after about a week of dabbling with different toy circuits, i found a keyboard in a junk box full of toys i had planned on getting rid of. 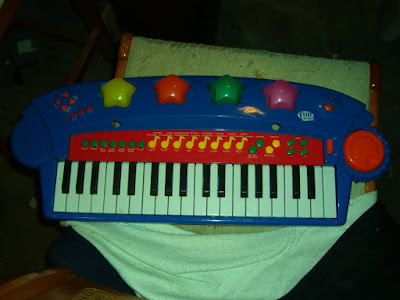 its a pretty common keyboard. it has 8 different drum beats, some really terrible timbres, 4-5 voice polyphony. the thing that really got me interested in this keyboard is that the lm386 amplifier had an additional circuit built on to it to flash two channels of leds to the sound of the keyboard. thinking at the time that this would be a quick project to throw together, the fact that that circuit was already built was a selling point. once i found the circuit i wanted to use, it was just a matter of finding something to put it in. i found this old "creatoy" keyboard that i had picked up at a thrift store a long time ago. 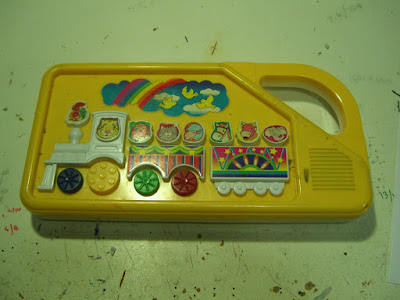 this isnt the the one i used. i forgot to take a picture of it before i tore it all up. its pretty much the same except the one i used had like a little piano or something on it. after searching for keys to put into it for like two hours, i found a two octave keyboard that fit alost perfectly. after some sanding, they fit like a glove. i then cut out the faceplate from a spare piece of plastic. 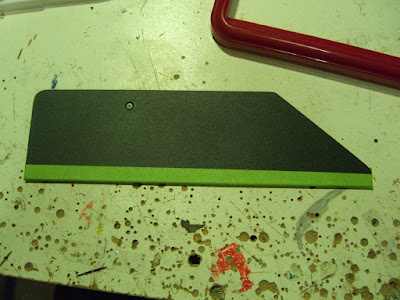 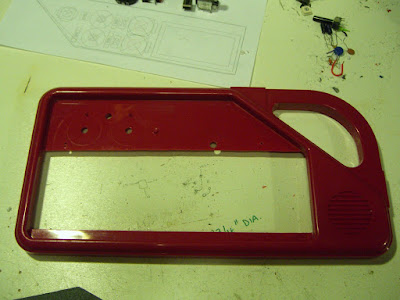 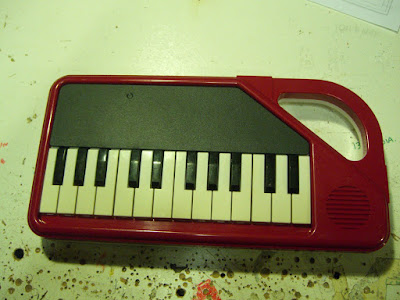 then i had to figure out how to consolidate the circuits to fit into the new enclosure. after carefully deconstructing and documenting the circuit, i put it all back together in its new form. 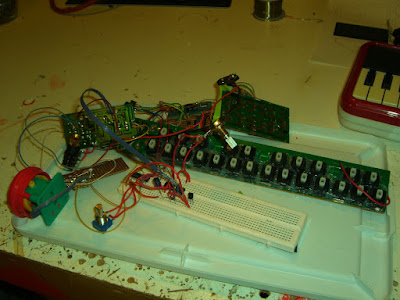 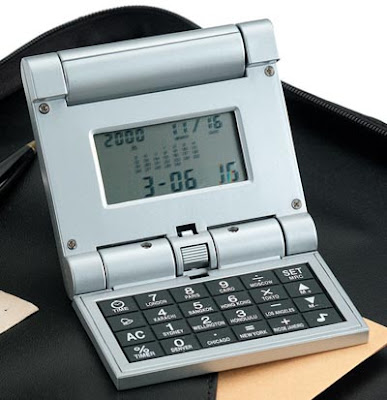 for the function switches i used a keypad from a portable clock i found at goodwill. i carefully buffed the silkscreen off of the rubber pads with a sander bit on my dremel. unfortunately the keypad that originally went with the keyboard keys was rotten and unusable, so i used large push switches from an old typing keyboard. i was considering mini tactile switches, but you dont get to push the keys very far with those. i wanted something at least a little bit more natural. that is why i used bigger keys for this in the first place. the battery compartment gave me a lot of grief. the original compartment was a space hog and only produced 4.5 volts. i cut a hole that was big enough to fit a 4 pack of aaa's, but they had nothing to rest against. i decided to cut out a bigger hole and just throw in a 6 aa battery holder with a battery door and everything. at this point i didnt know what additional circuitry would be going in the keyboard and how much voltage i would need. if i need 9v, no problem. if i only need 6, no problem. 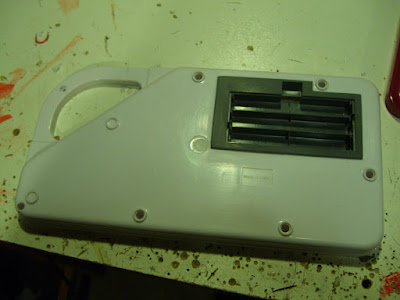 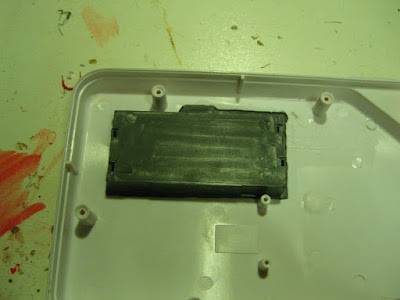 at this point it was getting pretty late in to september. heidi and i went to LA for a week and came back in october. when i got back i had to familiarize myself with what i had done so far on this project. i decided to use the led circuit to modulate the pitch of the keyboard with one channel, and the cutoff of a filter to give it a cool auto wah sound. i knew that adding a vcf to a shitty toy was going to be a big pain in the ass, but i was up for it. 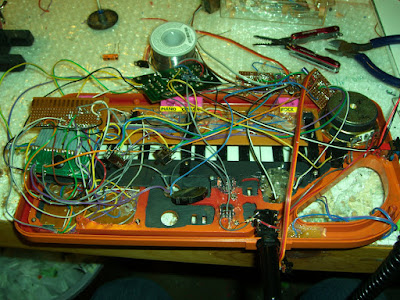 i soon found that i couldnt simply insert the filter in between the chip and the amplifier. there wasnt enough signal? i decided to add the filter after the first 386 amplifier and the add another one after the filter. im sure there was a more sophisticated approach to this but i think i tried everything. i breadboarded it up and cleaned up the ins and outs to get as clean a signal as possible. i worked great. i was having a lot of fun playing with it on the breadboard. once i put it all together on a circuit board things changed. i kept getting this retarded buzzing sound from the chip. after days and days of trying to eliminate it, i realized that the filter was just not going to cooperate with this chip. i tried switching the 386 amps for each other, rebuilding the filter with a different chip, and hundreds of combinations of passive filters between the ins and outs of everything. in the end i found that adding a gain capacitor to the final filter helped a bit but you can still kind of hear it. i decided to get rid of the pointless volume pot and replace it with a gain pot. when its closed the filter makes the 386 oscillate. kind of a pseudo resonance knob.

oh yeah, i also decided to add lfo's. go figure. the switches that turn on the env. modulation have a third position that turns on an oscillator that modulates the respective effect(pitch and/or filter). the oscillator speed is modulated by the envelope coming from the keyboard. this doesnt make sense does it? you'll see in the video. there are also switches that change lfo shape between triangle and square. the max frequency of the two oscillators is controlled by a joystick. the two psp joysticks control the minimum and maximum depths of the pitch bend and cutoff. there is also a pot right below the pseudo-res. knob. it is the fine pitch tuning knob. there is a switch to the right of the lfo joystick. this switches the lower octave to the octave above the high octave. the switch above that is a reset disable switch. this particular keyboard resets itself after 12-13 measures. super annoying. i used the audio signal to throw a transistor that switches the one key function(makes no sound). this function only worked with the rec.-play and the demo functions. i hadnt planned on keeping any of those, but i soon realized that if you use the one key function on demo mode, you can get these sweet loops to mess with. this wont work if the transistor is connected, so i added a disable switch. the blue square button to the right is the demo switch.
ok, what else? oh ya, there was a mic with this keyboard at one time so i added a line in. it also modulates the vcf and pitch bend and stuff. i've been having some fun with my guitar through it. it also has a line out that disables the speaker. 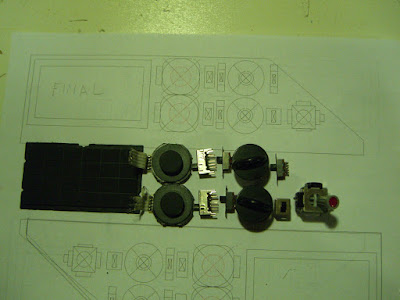 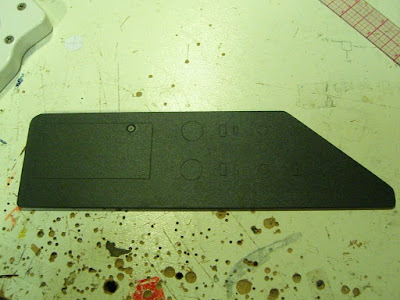 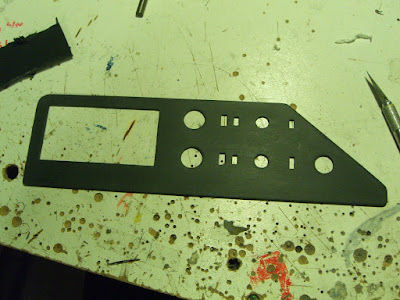 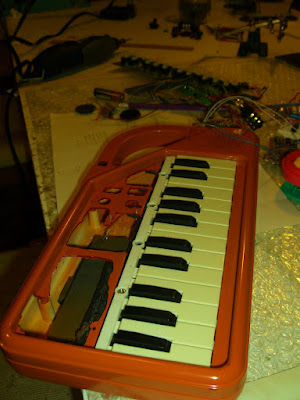 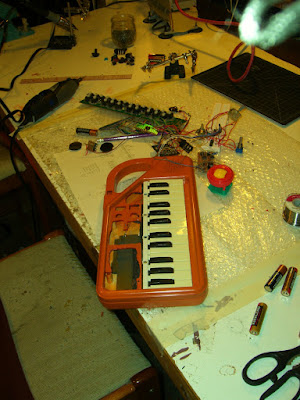 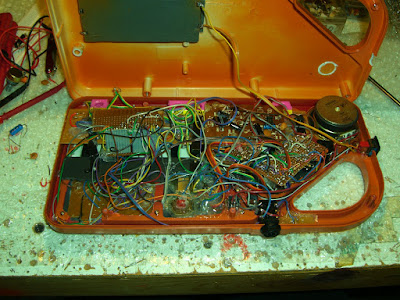 as far as the paint job is concerned; WHATEVER! it started out perfect and then i dropped it on the floor. now its scuffed. also, i put this kind of like Styrofoam protector around the lfo joystick to protect it while i was working on the inside and i hot glued something inside that heated up the other side of the faceplate that was touching the foam. it melted and bonded with the paint. oh well. live and learn. 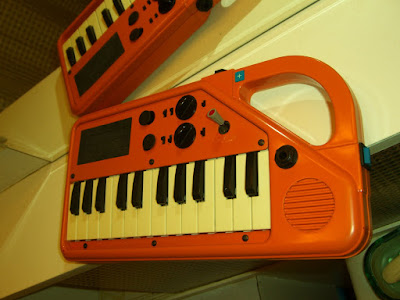 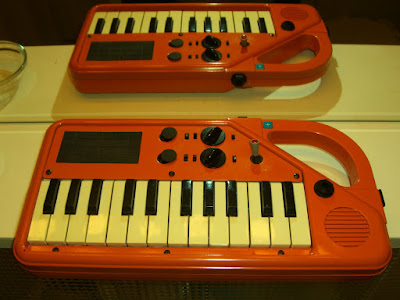 well, thats about it. or at least thats all i can remember sorry if this is all jumbled together like crap. its hard to fit 2 months in. let me know what you think. i will post a video soon. by the way, dont be afraid to click the pictures to see it in high res.
Posted by TANNER GALVIN