today was day 4 of production on the "funbox". to start, i cut a third and final side panel for the joystick side of the box. i also removed the springs from within the joystick so that it will stay in position when not in use. otherwise the stick would spring back to the center when not in use. this side panel is the most precisely flush one yet, and it only took about 10 minutes to make(the first one took about an hour). 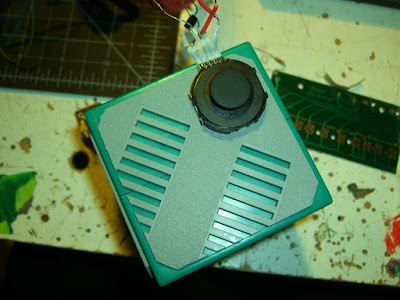 after assembling the circuit on my proto-board one last time to make sure it all works with the components ive chosen to use, i took it all apart and cut the circuit board in to three pieces. two of which will be used under the sets of keys. 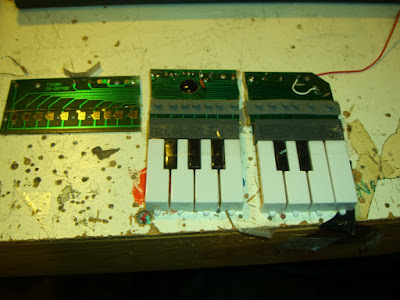 after that i had to rewire the circuit board back together. this was a frustrating task to say the least. i had to sand off the top layer of protective coating from the tracings without damging them, tin them up with solder, and and solder the joints together(less than 1mm wide). 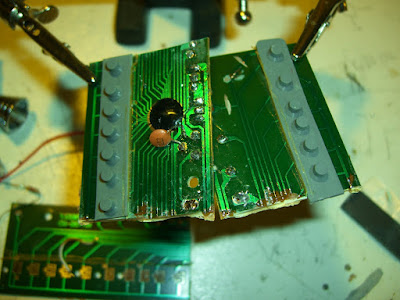 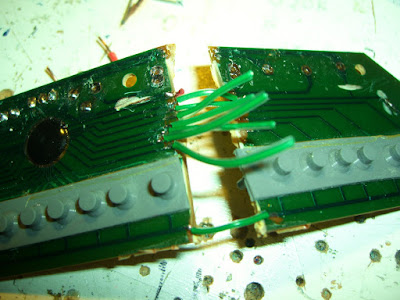 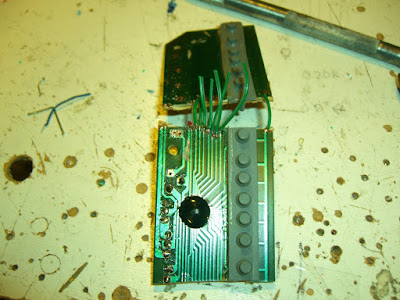 i then hot glued the wires to the circuit board to ensure that they would not come loose from rough handling. sure enough, they did anyway and i had to go back and fix and re-glue them. after that i had to make some modifications to the inside of the box to ensure that the two keyboards would line up with their respective keys. this process is is probably one of the most time consuming factors of all of my projects. i found myself staring at my project for 2 hours, imagining the potential setbacks that could arise. although it seems like a wast of time, it actually saves me a lot of frustration in the end from not having to physically encounter as many setbacks in fitting the piece together. 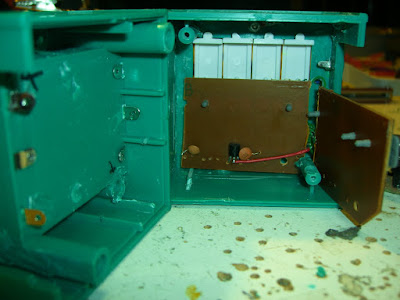 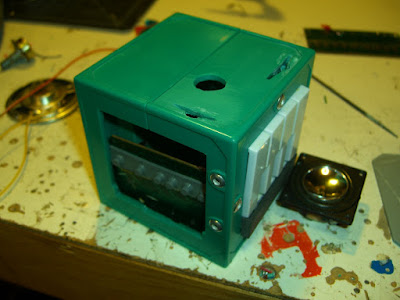 after two hours of putting it together and taking it apart and imagining where all the other hardware will fit in, i got a really bad headache. i called it a day at 5:30pm and took an aspirin nap. i am working for the next 4 days so i wont be able to put in any 10 hour days for a while. although, the work week is a great time to put on the paint. might as well wait for the paint to dry while i'm at work. that's multitasking. i still have to cut holes for the joystick, speaker, switches, and a pot. that shouldn't take too long though. i do still have to decide on a speaker to use and a color scheme. these are hard decisions. more to come.
Posted by TANNER GALVIN 1 comment:

i started this project on 5-26-08. since i'm only half or maybe a quarter of the way through it, i thought id make use of this thing called blog.
day1:
after a couple weeks of slacking off and not committing to any of the ideas that i had been messing with, i decided to build another of my notorious "box toys". i finished one earlier this month as a gift for a friend. sadly, i forgot to take hi-res pics of it before giving it away, but here's a video for a reference.

ok, so i gathered up a fresh box 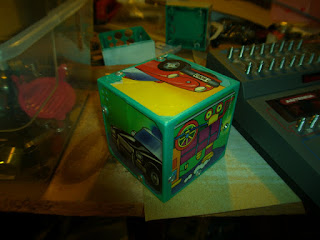 and a toy keyboard 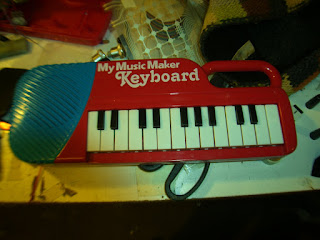 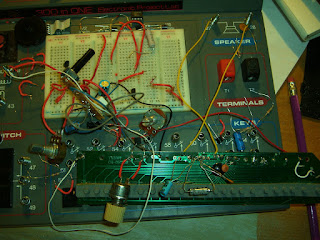 after coming up with an idea of how the toy will sound, i drew up a diagram of what the interface will be like 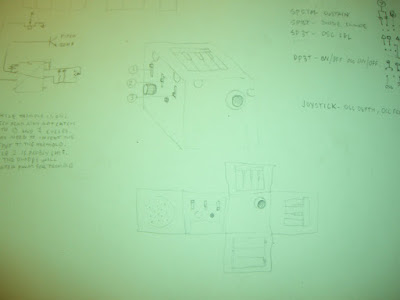 day2:
drafted and printed templates for the holes that will be cut to fit the keys and the side panels of the box(took a long time to get it right, just had to measure to 1/4 mm!) 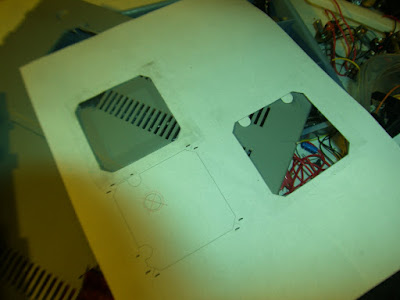 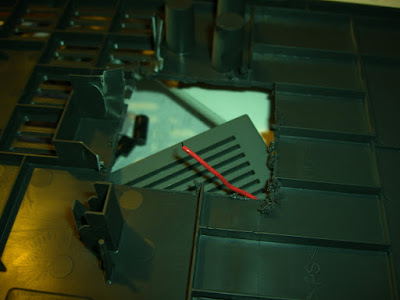 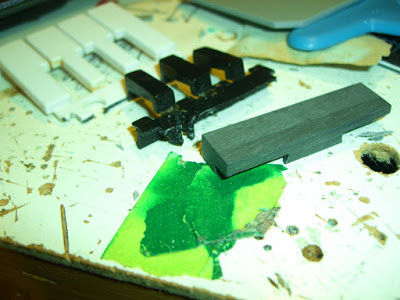 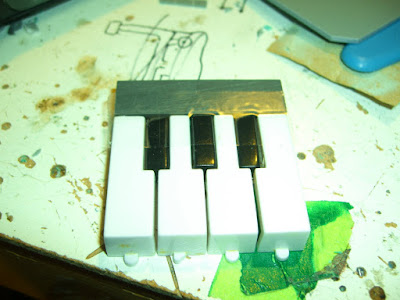 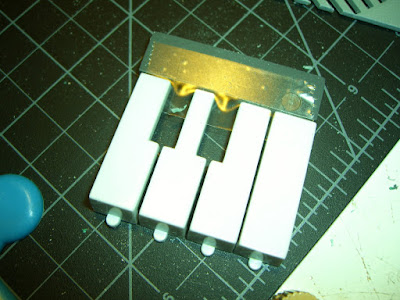 day3:
i cut the second hole for the first(easier)set of keys. now there are two giant holes for keys. they are extremely precise. 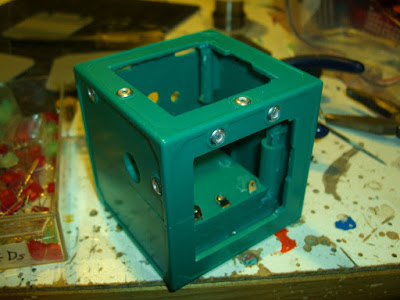 these are the tools i used to achieve such perfection(not pictured: scotch tape) 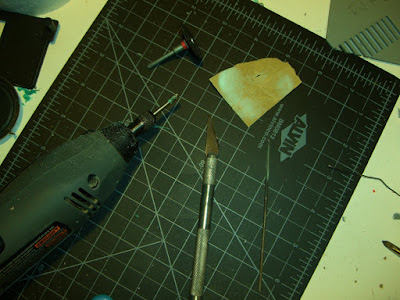 i then began with ideas for the side panels. after about an hour of going through scrap plastic and different ideas i came back to the aiwa plastic. (awesome plastic!) 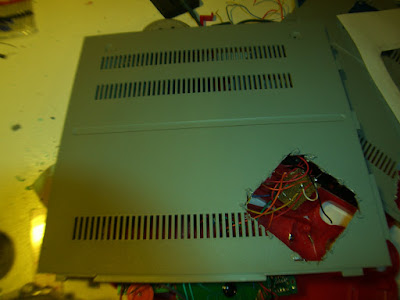 after a lot of cutting, sanding, catastrophic mistakes and bad ideas: 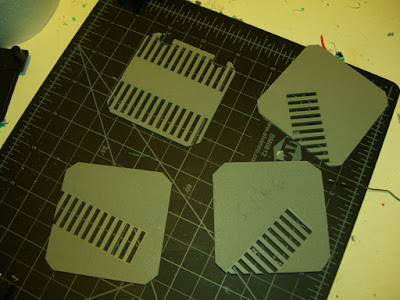 i got two side panels finished(lower left, upper right). they are perfectly flush.
here are some pics of the "scotch" assemblage. 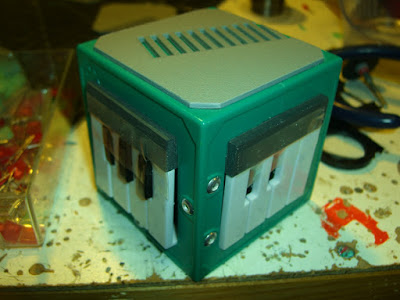 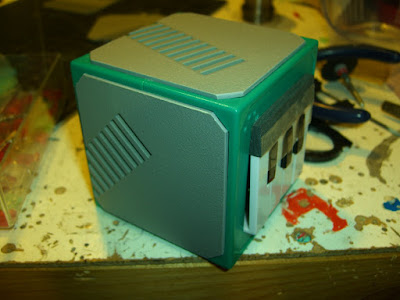 i think that's it for today. i dont think my wrists and neck can take anymore. maybe i'll cut up and rewire the circuit board tonight if i cant sleep.
Posted by TANNER GALVIN 3 comments: