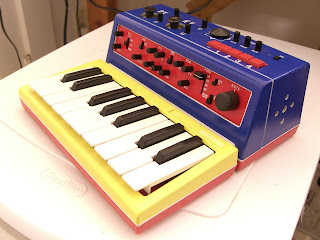 Well, its officially cold and wet again. its time to get back to Noystoise. over the past few months i have just been taking it easy and working on small scale projects. mostly just modding/fixing things for people for petty cash. i have also been helping my friend Matt build a couple hundred FuzzStang pedals. if you are into boutique fuzz, these are where its at. please don't ask me for the schematic though, i wont give it to you.
since its become un-fun outside, i have started a couple of projects, one of which is almost done. i figured i had better catch up on my blog before i have too many big projects to blog about.
This is a project among many that i have been meaning to post. i began this project in July and was finished by august. it started with a "Miles-388" keyboard, commonly known as the AK-900 or Hing Hon EK-001. i stripped the keyboard down to the chip and rebuilt it onto my Frankenstein proto-board. while exploring the circuits' capabilities, i seem to have caused some damage to the chip internally that caused some of the keys to go silent. it was tragic but worth it considering i was able to devise a way to trigger an envelope generator to modulate a VCF. this is a mod that i would have loved to have had on my recent Orange Hing Hon.
with the functionality of the keyboard hindered, i decided to build a "quick" lite version of what i would later build off of in the future. hence the name Light Miles. 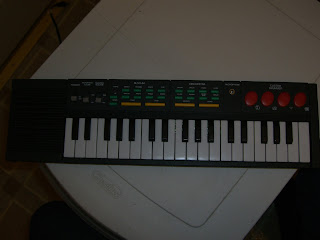 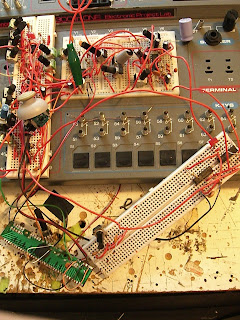 Coming up with the envelope generator was actually pretty simple. in the AK-900 PDF, there are two envelope outputs that control analog filters for each of the two voices. from those i had to get a gate, then convert the gate to trigger to start my Attack/Release generator. 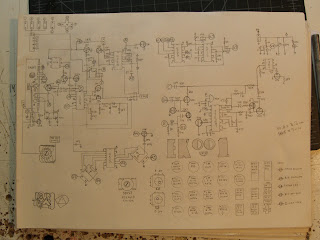 the trigger can also be synced with the tempo of the rhythm section(with indicator LED) or either of the two LFO's via the KEY SYNC function. of the two LFO's, one is labeled LFO and the other VIB. VIB is the the built in lfo that acts as the keyboards' vibrato by sending an inverted pulse to the pitch resistor effectively dropping the voltage going to the keyboard. it's kind of a funny approach considering the rate of the vibrato lfo is determined by the clock speed of the chip that it is modulating. there is a resistor in series with the vibrato I/O that determines how deep the pitch bend will be. i replaced that with a VIB depth pot. the vibrato signal can also be switched off to be used to trigger the piano keys being played and effectively synchronizes the VCF to the VIB. this is not an especially useful LFO if you consider that the frequency will only change with the pitch of the tones and the rhythms, but it does free up the other LFO for more modulation. the lfo labeled LFO is a square/triangle lfo. the triangle wave can only be switched on or off to modulate a small preset range of the VCF. it really just acts as a wahwah effect to layer on top of the VCF's other means of modulation. the square wave output of the LFO(with indicator LED) can also be switched to trigger the keys being played which will also effectively modulate the VCF through the envelope generator. in addition to that, the LFO can also be switched on to trigger each and all of the drum pads in the rhythm section. the LFO frequency is controlled by the RATE knob. in addition to the all of the lfo and vcf modulation, there is also a NOTE ON switch. when active, the NOTE knob can be jogged to hold any of the 12 notes between C and B of the octave below the low C on the keyboard. depending on what timbre the keyboard is set to, the note selected will either sound once and lock out it's voice until reswitched(piano), or hold indefinitely until reswitched(organ). 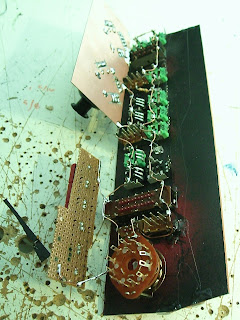 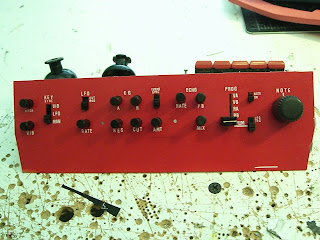 Originally upon finding that the integrated chip had become damaged, i had decided to utilize only the keys that were still working which reduced this keyboards' key range to 1-1/2 octave. because of this limitation i decided to use larger keys.upon further discovery i found that half of the drum sounds had been erased too. i was pretty disappointed but i did have a backup. years ago i had built a little black keyboard that i had named a "novelty synth" CX-500. the CX-500 is the same chip as the one in the miles/ak900/ek001 with minor differences in component placement. i was never satisfied with any aspect of the little black "novelty synth".
the paint was ugly, the keys were absolutely awful, and the only mods i really added along with rehousing it were two poorly adapted filters for the tone and rhythm sections. i didn't hesitate in ripping the little keyboard apart fore it's underutilized brain. since i had already set the keys and most of the hardware, there was not really any way to utilize the rest of the now functional keys. i had already planned to use the key hold mod so it made sense to have it trigger the keys that were not accessible through the keyboard. 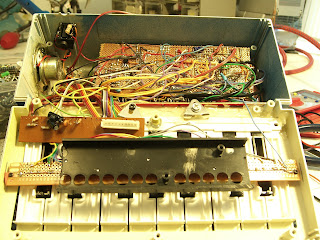 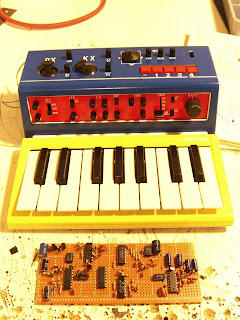 On the top of the keyboard above the red section with all of the modulation hardware is the MIXER/PROG section. there are five red buttons for the program section and one five way switch directly below them in the modulation section. originally the keyboard has 8 rhythms, 8 timbres, and 4 drum sounds. originally each rhythm, timbre and drum sound had its own switch. i thought that this was a waste of time and space on my keyboard since they are only 9 I/O's mixed. in addition to the VIB on/off switch, there are four red buttons labeled 1,2,3,4. the five position switch selects which bank the buttons access; voice A(VA), voiceB(VB), rhythm A(RA), rhythm B(RB), and drum sounds(DRUM). to the left and above the VIB switch there is a 4-way directional switch for the rhythms: start,stop, tempo up, tempo down. to the right of that there are volume controls for clean keys(KEYS), master drums(DRUM), and master volume(MAIN). to the right of the MAIN volume is the power(ON) switch(with indicator LED). on the lefthand-top side of the keyboard there are the DX and KX joysticks and pots. i added frequency dividers to both the drum and keyboard sounds. their respective joystick mix the sub frequencies together and are then mixed back into the original signal through the DXvol or KXvol. the dividers are turned on and off through pushing down the center switch of the joystick. an led will indicate if either is on or off. the CLEAN DRUM pot is used to attenuate the original drum sounds from the master drum mix. i cant remember why i added this but it must have been important... there is a knob labeled CATCH KX. this is a simple lowpass filter for the signal from the keyboard sounds to the frequency divider. the higher the cutoff frequency goes, the crazier and dirtier the signal gets until it is just noise. its very useful as fuzz or a noise generator. 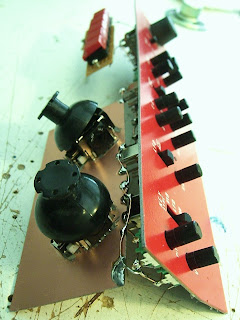 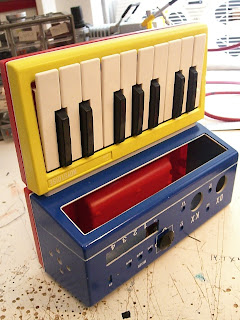 As if this all wasn't enough, i also added an echo circuit. its a pt2399 circuit that i adapted specially for this keyboard. it has the standard MIX, RATE, and FEED BACK that are commonly associated with the chip. the echo circuit really brings it all to another level.
among all of the things described, the keyboard has a built in speaker, 1/4" line out and runs off of 4 Ccell batteries. all of the hole cutting and case modding was done by yours truly. the paint is a kind of lego style color scheme done with acrylic airbrush paint. the lettering is all vinyl press-on lettering and the keyboard was finished with satin clear-coat for protection. 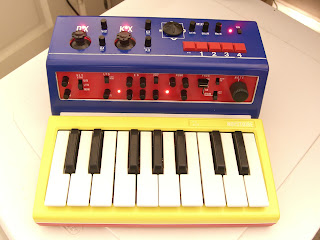 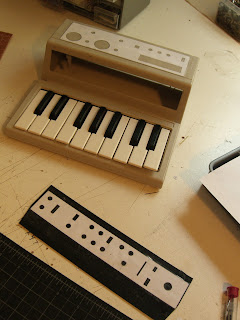 Wow! i cant believe i remembered all that. i guess i'm not as ignorant as i thought. please check out the photos for close-ups and watch the video if you haven't already.
Let me know what you think. thanks for reading.
-tanner
Posted by TANNER GALVIN